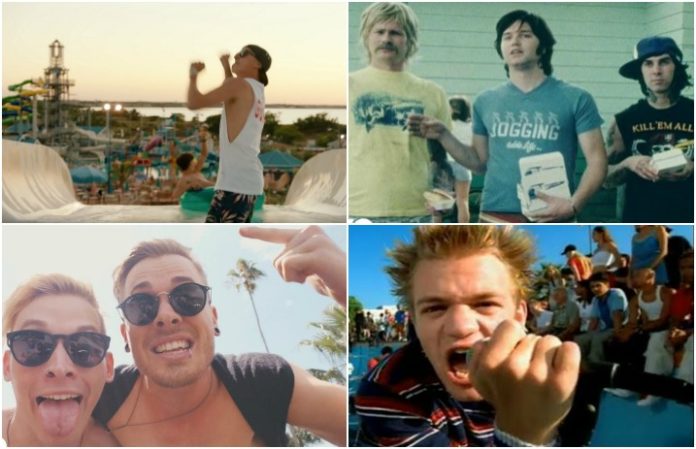 Picture this: You’ve been cooped up inside, swaddled in several layers of fleece blankets and sipping on Swiss Miss for the past three months straight, when finally… it’s here, the official first day of spring! With all of these exciting summer tour announcements as of late, we just can’t wait for warmer weather to arrive! But in the meantime, here’s our playlist of summery tunes to help get you through the storm:

“FRIDAY IS FOREVER” – WE THE KINGS

This video’s got it all: bikinis, fireworks and a boat full of band members! No worries here! (Except maybe where they’re going to park…)

The guys of Sum 41 take “dive contest” to a whole new level in this classic poolside video. They find creative ways to out-shine their Olympic opponents, such as slip-n-sliding and tackling each other off the deck. Guitarist Dave Baksh even goes the extra mile to pay homage to Slash with an epic guitar solo straight out of water!

The Northeastern rockers provide us with a kooky infomercial for “Waldo’s World,” a fictional theme park in New Jersey, where the park’s sleazy owner gives us a grand tour. The video reminds us all of days spent at our lame summer jobs growing up.

Another cheerful and carefree tune, this Canadian act migrate south, where they find themselves waking up on a beautiful sandy beach. There, they party it up and embrace the local culture with the help of their friend recording artist Sean Paul, whose reggae flow provides that essential island vibe.

“FOREVER STUCK IN OUR YOUTH” – SET IT OFF

If summer vacation means one thing and one thing only, it means celebration. The shirtless boys of SIO get over their hangovers from the night before by doing the only thing sensible: drinking by the sea! We’re super jealous of their laid-back lifestyle while we’re here stuck at home (and not in our youth, as the title suggests!).

“PRETTY FLY (FOR A WHITE GUY)” – THE OFFSPRING

Every now and then, there’s that one guy who tries way too hard to keep it cool during the summer heat when really all he’s doing is getting on everyone’s nerves. This classic vid perfectly describes the desire to gain a good rep and meet new people while the sun’s out. Just remember being “fly” takes more than sporting a few pieces of bling!

This nostalgic ’90s hit takes us on a stroll along the iconic boardwalks of Los Angeles. As the group’s plane lands in the Southwestern city, they try out other methods of transportation including jet skis, go-karts and matching bright orange mopeds!

“HERE (IN YOUR ARMS)” – HELLOGOODBYE

Sleep-away camp: For many youngsters, this was a rite of passage filled with games, crafts and raging hormones. The members of the band take on the role as campers at make-believe Camp HolaDios in 1991, while lead singer Forrest Kline attempts (and succeeds) to score with the girl of his dreams.

Summer flings can get pretty complicated, especially when you’ve found yourself lusting after your girlfriend’s mother! A cornerstone tune of the 2000s, this historic video follows a young boy doing everything he can to get a glimpse of his forbidden crush, even doing her chores like mowing the lawn.

Only ’70s kids remember: The dudes in Blink-182 pose as vintage bros getting themselves into all sorts of shenanigans in El Segundo, California. From stickball in the yard gone wrong to being caught as victims of shrinkage, it looks like the guys just can’t catch a break!

And now for something a little more on the serious side: This stripped down video describes a lost love between vocalist Martin Broda and an ex-girlfriend, as we see flashbacks of the pair riding the rides and playing in the arcade at a local carnival—a perfect song for those mellow summer nights.

An early video for the lads in 5SOS: The lyrics illustrate the boys’ attempts to get with a girl who’s way out of their league. Nowadays, the guys have teen girls around the world screaming their songs, but it’s always fun to look back at this adolescent amusement park montage!