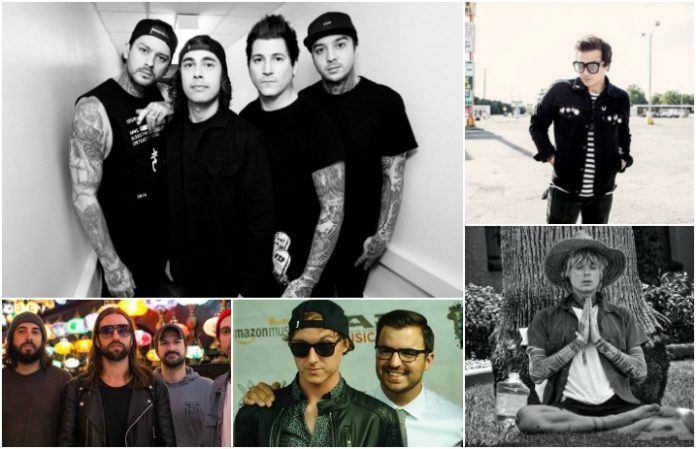 Look no further than your favorite bands for movie recommendations this week. We sat down with 12 artists to find out what one flick they can’t live without. From Scream to Die Hard, here’s what they said.

Read more: 14 musicians tell us about the first gig they ever played

Raneri: “Fiddler On The Roof, if I had to pick one.”
Bemis: “That’s so good and appropriate because your songs sometimes, I do feel like, they remind me of showtunes.”
Raneri: “Oh yeah, definitely.”
Bemis: “My favorite movie—it’s hard to pick one—I like Annie Hall a lot, and I like Wayne’s World. I could base my life on Mike Myers.”

“I think my favorite movie is The Mask. It’s just a movie that stuck with me. I watched it when I was quite young, and I remember being excited but also freaked out at the whole ‘The Mask’ transformation on Jim Carrey. It’s probably really bad if you go back and watch it [now]. But I remember just being mesmerized by it—it was good. I also love Jim Carrey, I loved every Jim Carrey film around then—Ace Ventura, everything like that.”

“My favorite movie is The Dark Knight. I think it’s the best superhero movie ever. Christian Bale’s great, and Heath Ledger is just the best bad guy you could [get]—best villain, best character probably ever in a movie. It’s just one of those movies that keeps giving—you think it’s done if you haven’t seen it for a while, and then there’s a whole new sequence coming up that you’re looking forward to. There’s so many good bits that you forget about, like the hospital scene, and you’re like, ‘Oh, wow, I forgot that was coming.’”

KEITH BUCKLEY, EVERY TIME I DIE
The Holy Mountain (1973)

“Holy Mountain. I had to think about this a lot, but the reason I settled on it as my favorite is because I can't explain why I love it so much. It reminds me of something intangible and when something (music/movies/books) can give you that feeling, it is truly powerful.”

“Die Hard. I remember as a kid, like being way too young to see Die Hard, and getting to see it was like, ‘Oh my God, this is the most badass movie I've ever seen in my life.’ There's so many quotable lines in it, like, ‘Do I sound like I'm ordering a pizza?’ [and] all that shit. It's so great. It's a dope movie. I mean, it really is.”

“I saw Scream in the theaters when I was 11 years old. It was the first time I had ever seen a violent horror movie outside of VHS rentals. I was already a huge scary movie fan, so to see a film actually referencing those other horror franchises that I loved was very exciting to me. The writing and direction was clever, the cast was funny, the concept was scary, the kills were creative, and, in my opinion, it sports one of the best surprise endings ever seen in any movie. Scream single-handedly revitalized the slasher/horror movie craze in ’90s and it will forever remain a crucial piece in the genre. Bravo to the cast, Wes Craven, the Weinstein brothers, and Kevin Williamson for this absolute masterpiece.”

“I’m a big Jim Carrey fan, and people actually tell me that I resemble, in my demeanor sometimes, Jim Carrey. I’ve gotten that since I was young because I’ve always been kind of a goofball. So, I really love The Truman Show because there’s a lot of deeper symbolisms in that movie. Deeper than most people wanna dig, honestly. I always loved watching that, and I always end up having new understandings of what the movie was about, and I just love Jim Carrey. He’s also a transcendental meditation guy. I was so close to meeting him and shaking his hand. It was at a David Lynch Foundation event, and he was celebrating Ringo Starr—a Ringo Starr memorabilia event—so that whole crowd was there, and I got invited by a friend, so I was super stoked. Jim Carrey was one of the speakers there. After the show was all set and done, a lot of great people played, I saw him across the room, I was with my manager at the time, and I said, ‘I gotta meet Jim Carrey—I love this guy!’ We started walking over toward him, and, next thing you know, he’s headed for the door, so I didn’t want to stop him, I just let it go. But so close. He’s a big meditation guy, so I respect that.”

“Oooh, The Goonies. I just grew up relating to that movie because when I grew up, me and all my friends rode bikes, and I think The Goonies for the new generation is Stranger Things. They actually got a lot of shots from those kind of movies. I always kind of related to it. Me and my friends, we would just ride our bikes all day [and] all night, and just BMX and just go explore the places we shouldn't go. I don't know, it always had a good place in my heart. I say The Goonies and a lot of people are like, ‘What? I've never seen that.’ If you didn't see The Goonies, go do yourself a favor and check out Sloth and Chunk and friends.”

“I’m a big sucker for gangster and big mob movies, so I always immediately go to a movie like The Departed, because with the cast and everything there had to be lots of money spent on all the casting for that kind of movie. All those movies, like the Ocean’s Eleven series and even old [ones] like The Godfather and Goodfellas, are my kind of guilty pleasure with movie genres.”

JOSH FRANCESCHI, YOU ME AT SIX
Seven Pounds (2008)

“Well, this is going to sound very strange. [Laughs.] It's actually a film called Seven Pounds. It’s a film [that I can] zone in on and watch. It's one of those films that it doesn't matter whether or not you think you'll cry, you'll definitely cry. It's very, very beautiful and emotional.”