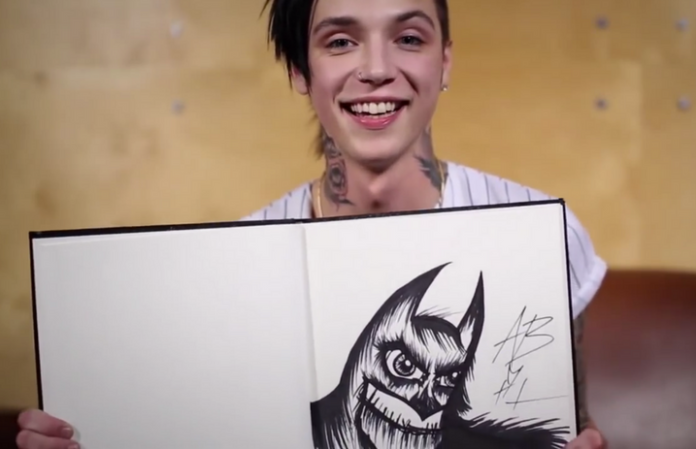 Music is art. Duh. But plenty of musicians are a double threat; on top of their musical achievements, they are also accomplished visual artists.

Whether it’s illustration, painting, doodling or comic book drawing, these 12 musicians have some serious artistic talent.

Ninja’s artwork can be seen all through the background of Die Antwoord’s “Enter The Ninja” music video. It’s pretty distinctive of the hip-hop duo’s colorful vibes.

The Neck Deep bassist does a ton of illustrations for the band, and also sells his work on his own online store.

Is that such a crime?

The lead singer of Portugal. The Man creates artwork that regularly appears on the band’s album covers—and it’s pretty strange.

Since Donald Trump’s presidential win, Gordon’s been spending some time making gritty, artistic protest signs. Further back, you can see some of her other creative work, like this portrait, on her Instagram account.

Much of Lalonde’s work revolves around his band, Born Ruffians, and this example of a T-shirt design he made is no exception.

Much of DuPree Bemis’ illustration work is seen on band merchandise for her band, Eisley.

Skiba has had his art on display at different galleries. Usually his paintings portray punk and dark themes.

Biersack’s got some talent, even when it’s just a quick drawing. Watch him masterfully doodle a drawing of Batman in this interview.

Hanging with the man, Martin Gore. What a great guy. Lyrics from their song Policy of Truth painted on canvas for my late brother. #charity #depechemode #fuckcancer

Gore, a founder of Depeche Mode, is also an active painter, often creating works for charity.

The former My Chemical Romance frontman is also an accomplished comic book artist and writer. He drew concept art and variant covers for his series The True Lives Of The Fabulous Killjoys and The Umbrella Academy, along with other credits.

Check out my Leprechaun Mikey and his pot of pizza on the official @TMNT page! pic.twitter.com/1ypQSrrmYs

For even more of your favorite musicians who are also amazing visual artists check out our art special in AP 345, featuring interviews and special posters from Pierce The Veil's Vic Fuentes, Every Time I Die's Jordan Buckley, Neck Deep's Fil Thorpe-Evans and Blink-182/Alkaline Trio's Matt Skiba.