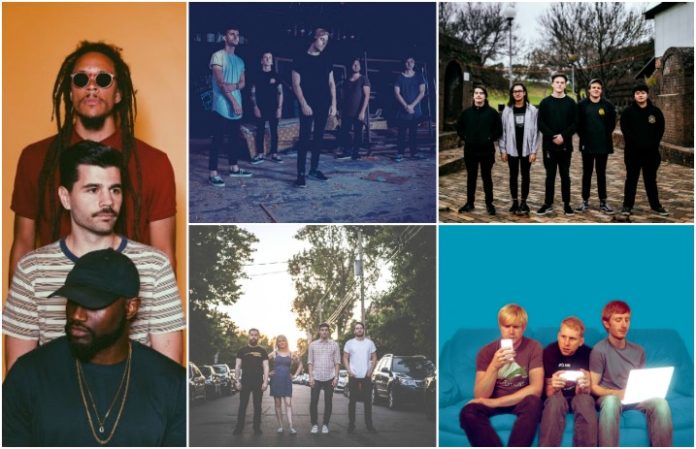 One of AP’s past “12 bands you need to know” in the print issue, Heart Attack Man hail from Cleveland and have crafted an awesome video for their new single “Taking Sides.” The band mix indie-emo-punk-ish vibes, exemplified on this soothingly catchy track. Their debut releases on March 3.

Thousand Below are the newest addition to the Rise Records family, now labelmates with the likes of the Devil Wears Prada, PVRIS, Of Mice & Men and more. To celebrate their signing, the post-hardcore, rock-infused group released the single “Tradition,” which intertwines catchy clean vocals and strong unclean vocals.

Quirky indie rock band Benchmarks are Jimmy Eat World meets the Menzingers, and their new single, “Frames,” is not only catchy—but also touches on some deeper ideas. Discussing frontman’s ADD and its dizzying effect on life, “Benchmarks” is a song that will cheer you up on a rainy day (or if your team loses in the Super Bowl). Grab their LP, Undivided Attention, on March 24.

Undercast are a rising pop-punk band from Sydney, Australia, currently on tour with As It Is and Between You And Me. Their newest single, “Loiter,” shows off their talent in pairing off vocals between the frontman and bassist, creating an infectious pop-punk jingle to spin in the car on a Saturday afternoon.

Our Hollow, Our Home – “Karmadillo”

Our Hollow, Our Home are a rising heavy band from the U.K. “Karmadillo,” their newest single, dropped on Thursday, and its video has already amassed almost 110,000 views on YouTube. The melodic metalcore band even make their softer moments heavy and are gearing to release their debut album on March 3.

Where Fires Are – “I’ve Got The Time”

Bursting with energy, Where Fires Are are a new English alt-rock band ready to take the scene by storm. Their hot-off-the-press EP, one four six one, dropped on Thursday (Feb. 2)—and “I’ve Got The Time” is the adrenaline-fuelled lead single.

Hold Close have everything you could possibly need and want in an awesome pop-punk band. Their video for “Cutting Ties” tells a cute story in between performance shots, visualizing the endlessly catchy track in perfect, pop-punk style.

Boston’s Funeral Attire are a melodic hardcore masterpiece, participating in a split with New York’s I Dreamt The Sea. One of their contributions to that split, “Fractures,” includes guest vocals from Counterpart’s Brendan Murphy. Grab the release on Feb. 10.

“Opera” is a politically-charged track from alternative hip-hop trio RDGLDGRN. One third of the trio, Green, said to NYLON: “Human beings in this country are still being treated as if they were aliens.” The alien motif is displayed in the video for “Opera,” which features guest vocals from rapper Method Man.

Poeta are a rock band from New Jersey, gearing up to release their new album, Golden Fields, on March 31. The title track showcases a combination of soft rock instrumentation with gracefully heavy vocals. Grab the EP here.

Laureate capture alt-poppy elements of the ‘90s with their newest track “Come Around,” which is culled from their forthcoming album, Landmarks, out March 24 via Jumpstart. “Come Around” displays vocals from both bassist Erin Power and guitarist Giancarlo Talarico, forming an easy-going Sunday sing-along. Catch the Canadians on tour this month.

The Grievance Club – “In Color & Tone”

The Grievance Club were included in the “12 bands you need to know” section in a previous issue. The Ohio natives released “In Color & Tone” this week, and the punky and dynamic track comes with an accompanying video created by Bobby Maker.