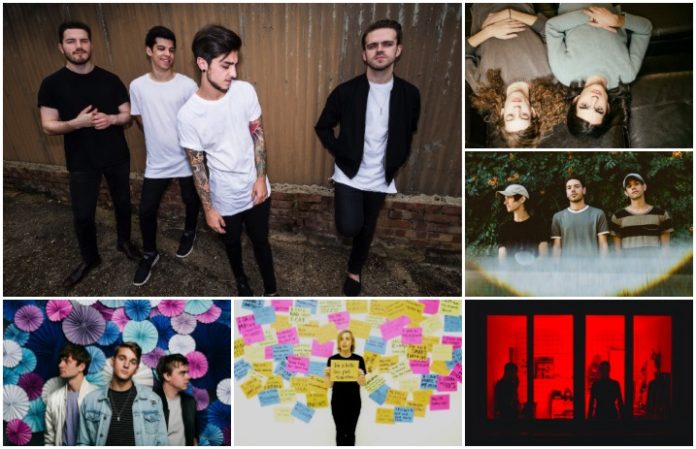 Selfish Things bring the alt-rock home on their new release, “8147 Mulholland Terrace.” Powerful guitars, pristine vocals, an interesting name, “8147” has it all—no wonder it’s the lead single from the band’s on-the-way EP, Vertical Love. The band are hitting Toronto, Canada for a show on Feb. 11. Check out the details here.

Sundressed – “A Little Less Put Together”

Be proud of your insecurities with Sundressed’s new track and video combination for “A Little Less Put Together.” Readying for a tour with Nominee, Sundressed put it all in this song: an addictive chorus, relatable lyrics and a fun—yet thoughtful—video.

Hot off the press, Snow Culture unveiled their debut song this week, called “No Sleep.” It’s an atmospheric, ‘80s-styled hello from the Swedish duo, complete with a video compiled of short clips that will get under your skin.

The Obsessives – “It’s Okay If”

The Obsessives are not only gearing up for a tour with Modern Baseball, but the duo are also releasing their self-titled sophomore album on March 17 via Lame-O Records. Nick Bairatchnyi and Jackson Mansfield are able to capture a varied list of sounds in their music, represented in their newest release, “It’s Okay If.” The result is a ‘90s rock meets emo meets a bit of indie punk.

Power Trip’s released “Nightmare Logic” this week—a track that let’s strong, heavy instrumentation dominate the four and a half minutes. “Nightmare Logic” comes from the band’s second full-length of the same name, which is slated to drop Feb. 24. They’re also heading out on a tour with Iron Reagan.

Vinyl Theater not only detailed their new album, but also dropped four new songs from the record. Out of the four solid tracks, “The Island,” in particular, showcases the Fueled By Ramen up-and-comers glittering pop rock mentality with its perfect and catchy chorus.

The One Hundred – “Dark Matters”

Daniel P. Carter’s BBC Radio 1 Rock Show premiered the One Hundred’s new single, “Dark Matters”—the first from their forthcoming debut album. That album will drop via Spinefarm, and if the lead single is any indication, it will feature a smooth combination of electric beats, screams and heavy guitars.

Recent Rude Records signees, 7 Minutes In Heaven released their rendition of Twenty One Pilots’ hit “Heathens,” which tones down the massively popular track in a live acoustic setting.

Porshyne are a rising prog-rock band who premiered a killer track this week called “Exit.” It pairs grounded vocals with hard hitting instrumentation, bringing together an interesting and attractive sonic experience.

Revival Recordings’ Charlatan dropped the lead single from their debut album, Remarkable, which is ready to release April 7. “The Sick Nasty” is a frantic, rushed, but endearing track, accompanied by a video counterpart, with a chorus that laments: “We’re in love and sucks.”

Mayfield are gearing up to hit the studio and record a full-length this April. In anticipation, the band premiered “Corroding” this week to give fans a small taste of what they should expect, which seems to be killer unclean vocals and heavy instrumentation.