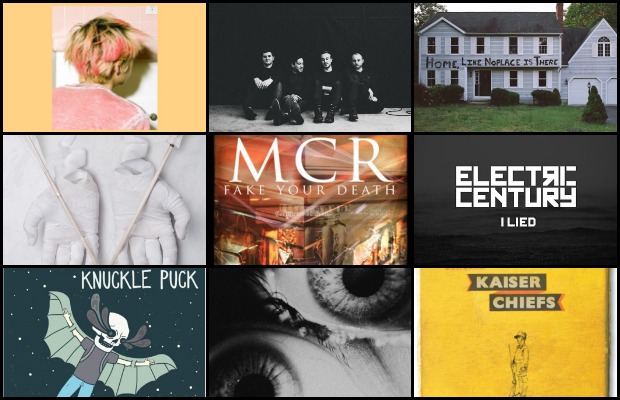 Sometimes the rock world can get noisy, and we don’t just mean in decibels or fuzz. Often the signal-to-noise ratio is more noise than signal. But no worries; we read, listen to and watch everything so we can sort it for you. Here are some of our favorite new songs and videos of February 2014.

Just in time for your post-Valentine’s Day meltdown, the closing track from Bear Hands' sophomore LP is poignant and perplexing. In this slow-moving heartbreak, frontman Dylan Rau is positively aching (“I thought we were in love/But you proved me wrong”) and anal-retentive (“Haven't heard from you since August 17”), resulting in a song that comes off like a dose of respectful melancholy rather than some some kind of murder-suicide-revenge scenario—which is usually the opposite of today's breakup songs, right? The percussion track that sounds like an old typewriter hammering out a take-me-back note adds a weird urgency you can't help but perceive as that broken heart erratically palpitating in hopes of a second chance. Even if you're hopelessly in love, you can't deny its sadness. —Jason Pettigrew

BLEACHERS – “I Wanna Get Better”

Before co-founding fun., guitarist Jack Antonoff fronted New Jersey group Steel Train. Though they've been inactive since early 2013, Antonoff is once again front and center with his latest musical venture, Bleachers. Behind the scenes, Jack managed to write and record an entire album, due out this spring, and even slipped onto the lineup of several summer fests without anyone noticing. Bleachers' first single, “I Wanna Get Better,” is an anthemic, endlessly catchy, pop rock romp, combining Steel Train's indie-rock tendencies with fun.'s penchant for huge hooks. If this track is any indication, I'm sure Bleachers' debut will be a perfect way to satisfy that fun. craving until the trio return with their third full-length. —Philip Obenschain

Creative Adult teased fans for years with promising EPs that always seemed to come out late, but the songs on the band’s debut LP were well worth the wait. Psychic Mess is a roller coaster of post-hardcore, garage punk madness, and droney-to-hectic lead single “Far Out” is an ideal representation of the album. —Mamie Silver

I can’t tell if it’s 2014 or 1984, thanks to the debut track from Electric Century. Dave Debiak and Mikey Way craft some lush, widescreen pop music that has greater warmth and resonance than all that sincere nü-rave stuff the college coeds froth over. With a vibe that’s closer to New Order (ca. Power, Corruption And Lies) than Passion Pit, “I Lied” works as both dancefloor head-nod fodder and poignant lyrical reflection. I’d love to play iPod Police with the duo, just to see if names like When In Rome, China Crisis and Fiction Factory are on there. —Jason Pettigrew

THE HOTELIER – “Among The Wildflowers”

Name changes, label changes, an overall dissatisfaction with the music business—the Hotelier have been through it all in their short time as a band. Fortunately, they turned all that into a phenomenal new record, Home, Like Noplace Is There. “Among The Wildflowers” is a plaintive emo-rock number that channels the Get Up Kids, Jimmy Eat World and early Brand New. But it's frontman Christian Holden's voice, which wavers between slight fragility and outright defiance­–that sets the Hotelier apart. —Brittany Moseley

With their first studio album in eight years, it’s damn good to hear something new from Australia’s I Killed The Prom Queen. After a near complete line up change since their last release, vocalist Jamie Hope makes his IKTPQ debut. “Bright Enough” showcases Hope’s mid-to-low range screams while guitarist/vocalist Jona Weinhofen (ex-Bring Me The Horizon), the only remaining founding member, belts out a chorus with his refreshing clean vocals that are, unfortunately, quite scarce throughout the album. “Bright Enough” offers a much-appreciated shift from the expected brutal breakdowns with complementing deep growls and a chorus that leaves you wondering what else these guys could do if they implemented more clean vocals in the future. —Nick Major

The first time I saw Kaiser Chiefs was in 2005 opening for my all-time favorite band, Weezer, and as we've all probably done when waiting for our favorite band to go onstage, I tuned out the opening act. Since then, the band have delivered a handful of singles I've grown to appreciate, most specifically 2010's “Ruby,” but I still never paid much attention to them. Having listened to an advance of their new album, Education, Education, Education & War, an unhealthy amount of times in the past week, it's clear I've been making a decade-long error in judgment. Time to dig into that back catalog! —Scott Heisel

On “Fences,” Chicago’s Knuckle Puck play emotive pop punk with a flustering sense of vocal aggression and a defiant lyrical slant. “I swore I wouldn't die a tradesman/Like every other prick in the town that we grew up in/Who you'll probably end up with,” singer Joe Taylor shouts—likely at an ex-girlfriend—over a dazzling soundscape that breeds nostalgia for summer nights spent listening to Drive-Thru Records comps. The band join the ranks of those making it harder and harder to deny a pop punk “revival,” and not just because their lyrics belong in an earlier era: “Memories of you are like a treadmill/I keep running, but I'm not getting anywhere.” Can we all just be teenagers again, please? —Matt Crane

THE MENZINGERS – “In Remission”

It looks like the Menzingers are ready for bigger things with “In Remission.” Digging into Epitaph's resources, they deliver a music video of slow-mo walking shots (how “Bittersweet Symphony” of them!) and white-walled performance cuts for their own casually anthemic Philly punk-rock. Those that found solace in “I will fuck this up/I fucking know it!” will be comforted by Greg Barnett's latest admittance of “If everyone needs a crutch/Then I need a wheelchair.” —Brian Kraus

MY CHEMICAL ROMANCE – “Fake Your Death”

When Gerard Way prefaced the release of “Fake Your Death” by telling us it was “the last MCR song” and “fucking heartbreaking,” the atmosphere among the members of the MCRmy grew palpably heavy. While serving as a form of closure, “Fake Your Death” is also the signal of the end of something incredible that will never be duplicated. Some fans cling to the title conspiratorially (“Could it mean it’s not the end?!”), others cling to the song itself (I know fans who have had it on repeat for a week-plus straight) and some have found catharsis through the song’s eye-opening honesty. When Way repeatedly directs the listener to “just look at all that pain,” you get the sobering feeling he’s not talking about the world at large anymore, but could be addressing the high-pressure, symbiotic and selectively voyeuristic relationship between a band and its fans. —Cassie Whitt

Though it's been a few years since Conor Oberst retired the Bright Eyes moniker, his output has remained as prolific as ever. The singer's latest solo album, Upside Down Mountain, will arrive May 20, and lead single “Hundreds Of Ways” would suggest that it'll stay true to the folksy, singer-songwriter sound Oberst has locked into lately. Less traditionalist folk than some of his other recent ventures, “Hundreds Of Ways” sounds like it could fit it on Bright Eyes' Cassadaga or fan-favorite I'm Wide Awake, It's Morning–great news for fans of Oberst at his most earnest. —Philip Obenschain

WEEZER – “Back To The Shack”

Remember earlier, when I mentioned Weezer are my all-time favorite band? Well, it's true: Earlier this month, I went on the 2014 Weezer Cruise and had the time of my life, just as I did with the 2012 iteration. But one of the most exciting parts of the whole experience was when the band debuted a brand new song titled “Back To The Shack” as the final song of their encore each night. It's a basic, hard rawk song that musically gives a bit of a Maladroit vibe, but Rivers Cuomo's lyrics are super-self-referential, as he sings about the missteps of his band's past two albums and the desire to get “back to the shack” (in this case, the shack being a small home studio located on Cuomo's property where he wrote most of the Red Album). The song has been extremely divisive among fans, but I personally love it, and think it will be the perfect lead-off track to Weezer's next studio album, due out later this year and produced by Ric Ocasek. —Scott Heisel