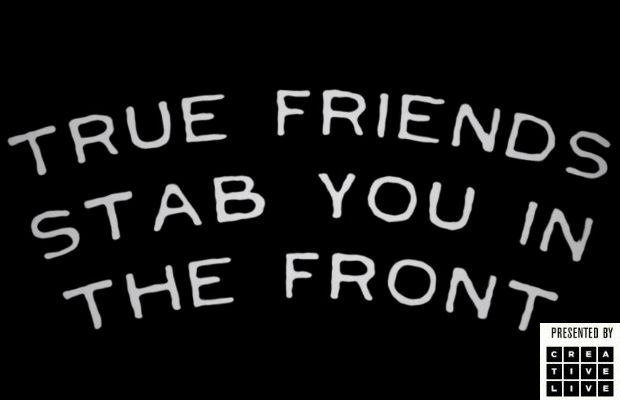 Sometimes the rock world can get noisy, and we don’t just mean in decibels or fuzz. Often the signal-to-noise ratio is more noise than signal. But no worries: We read, listen to and watch everything so we can sort it for you. Here are some of our favorite new songs and videos of July 2015 brought to you in partnership with our friends at CreativeLive.

Editor-In-Chief Jason Pettigrew said it best when he texted me this after a Beach Slang gig: “I would rather see Beach Slang than a Replacements reunion anytime.” While I'd still kill to see Westerberg and Co., Beach Slang is carrying the ramshackle garage-pop torch quite well into the future. With tracks underpinned by by spinning shoegaze-indebted guitars and a voice that sounds lovingly frayed, the Philadelphians careen through “Bad Art & Weirdo Ideas”, a joyful summer-soaked cut from their upcoming LP The Things We Do To Find People Who Feel Like Us. It's galvanizing and enchanting and made for wild-armed dancing, proof that this buzz band has earned their hype. [LM]

Love songs don't often sport choruses where the paramour “blew all your brains out on my lawn.” But Better Off craft tales in a wizened emo-rock sweet spot, and deliver that line over a rushing, ebullient harmony that makes the prospect sound appealing. The Nashville band eschew easy “I love you's” for an extended metaphor on suicide (that's right, it's symbolic, ok?) and in a musical year where on-the-nose cliches are rampant, the more abstract approach is sorely needed. “Dresser Drawer” comes from Better Off's upcoming second LP, Milk, and hints at an album full of similarly realized, wistful rock, with breathless high notes and melodic nods to genre forefathers like Jimmy Eat World. Need more convincing? State Champs' Tyler Szalkowski claims them as one of his favorite bands. [LM]

BRING ME THE HORIZON – “True Friends”

Following the amazing “Throne,” Bring Me The Horizon get a little tragic on “True Friends,” the third single off their insanely anticipated new album, That’s The Spirit. “You broke my heart, and there’s nothing you can do,” Oli Sykes sings. “Now you know, now you know/True friends stab you in the front.” It’s a gentler, more melodic BMTH, but this incarnation is clearly here to stay—and we’re gonna learn to love it. [MC]

If you ever wondered what might happen if AFI and Tiger Army just fused, you might find something like Creeper’s purple-tinged punk-rock. In their latest single, “The Honeymoon Suite,” the band show you a darker side of romance. [CW]

While the Americana-tinged rocker “Still & True” on the (deluxe edition) is essential listening, “Penance” shows the band's dominant hand of melodic hardcore cards on Abandoned. Four albums in, the Bostonites haven't lost their bite, with frenetic riffs pounding away like carpenters on speed. Recovered from hip replacement surgery, frontman Derek Archambault screams of “cold New England air” with a burning clarity, as if to prove he hasn't skipped a beat. [BK]

Dealer is nigh, and if “The Magdalene” is any indication of the quality that runs throughout the 11-track effort, Foxing are poised to grace the tops of several “Album Of The Year” lists, come 2015's final days. Boasting a far more polished production than that found on 2013's The Albatross, the silky smooth layers of instrumentation serve as the perfect foundation for Conor Murphy's impressively evolved vocal delivery. It's an alluring brand of organic indie rock reminiscent of As Tall As Lions and Polyenso, but it's very Foxing all the same. Foxing and fantastic. [BL]

FRNKIERO ANDTHE CELLABRATION – “Give Me Liberty, But Give Me Depth”

Frank Iero is never going to sit at the top of the SoundScan chart, be asked to coach would-be stars on The Voice, play the L'Oreal stage at Warped Tour or take meetings with all those jerks in that Tidal streaming services video. Thank god. I only say that because this track—his contribution to a split-single featuring British modern-rockers Lonely The Brave—is the aural equivalent of watching fire rage through, a room where everything is covered in plastic, with all the bubbling and blistering destroying everything in its charred path. The corrosive “Give Me Liberty, But Give Me Depth” feels like it was inspired by tall urns of black coffee, prototype distortion pedals and whatever self-exorcism Iero chose to yank out of his twitching nervous system on the day of recording. If you prefer his other band Leathermouth to Stomachaches, you really need to mug a hedge fund manager and get this sucker, stat. [JP]

JUSTIN BIEBER – “What Do You Mean?”

There’s a good chance you’re going to enjoy Justin Bieber’s latest single, “What Do You Mean?” far more than you’d publicy admit. The Skrillex-produced track boasts a vibrant instrumental that loops seamlessly with Bieb’s matured vocals. “What do you mean?/When you nod your head yes/But you wanna say no,” the pop star croons in the song’s earworm chorus. You may not appreciate his presence in the music industry, but you’ll realize why he’s here when you can’t get this hook out of your head. [TS]

Simple Plan have finally done it: made the most Simple Plan song ever. “You’re my favorite song/My sing along,” Pierre Bouvier chirps like its 2003 all over again. “Boom” is catchy—bore-its-way-into-your-brain-like-a-power-drill catchy. It feels like a true return to form for the band—and not just because there are gushy lyrics like this: “You still make my crazy little heart go boom!” [MC]

Most of Slaves' latest record cosists of cosmic post-hardcore with a hungry, bass-booming belly we've come to expect. “Winter Everywhere” is a volume break and throwback to Jonny Craig's solo debut, a majestic acoustic work with a Church-like refrain (“I wanna go back to the days in my car/Where we sang the loudest by far”). While Craig's relationships with his former bandmates are often strained, his Dance Gavin Dance successor Tilian Pearson joins him here without incident. Together, the pair are undeniably smooth operators. [BK]

“Losing Myself,” the new single from State Champs’ impending album Around The World And Back, might usher in the long-awaited rise of these sunshine-y pop-punks to the forefront of the genre. Listen close and get onboard now—you just might be hearing the next generation’s All Time Low. [CW]

The new dollop of gripping noise punk from British trio Youth Man scratches every scabrous lesion on my brain. Vocalist/guitarist Kaila Whyte sings slightly more melodic than what you might hear at a pterodactyl orgy, while the rhythm section powers the track quite mightily. On the downside, the video—the band kidnapping their producer, painting his face and forcing hamburgers down his piehole—is kinda meh. (The legendary clip of Every Time I Die's Andy Williams wolfing down Taco Bell burritos is far more captivating. I mean, if you like that kind of thing…) Cinematic missteps aside, “Pigs” is another furious glassbomb from a band who should really make plans to torch America's underground up next year. [JP]