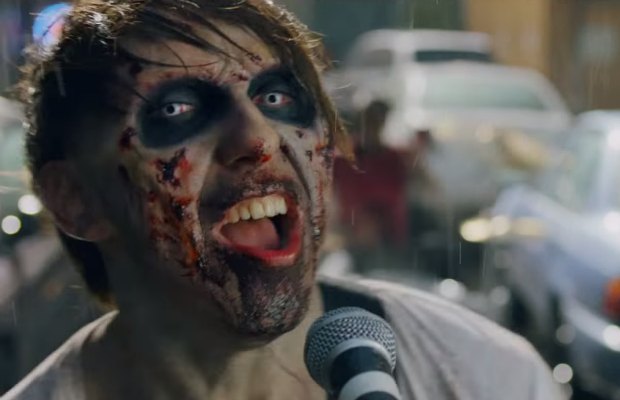 Sometimes the rock world can get noisy, and we don’t just mean in decibels or fuzz. Often the signal-to-noise ratio is more noise than signal. But no worries: We read, listen to and watch everything so we can sort it for you. Here are some of our favorite new songs and videos of January 2015.

ALL TIME LOW – “Something’s Gotta Give”

“Maybe I’m a fucking waste,” Alex Gaskarth sings over a bouncy sugar-rush of pop-punk. The song churns out classic All Time Low in turns—but it’s more mid-tempo, and has the potential to be a radio single. You can already see the gang winning over legions of 5 Seconds Of Summer fans on that arena tour that will happen if there is a god. —Matt Crane

Fearless Records newcomers As It Is nurse the guilt of leaving behind someone you love to pursue your dreams with “Dial Tones,” the first single from their debut album Never Happy, Ever After, which is out later this year. With a sound that one fellow AP writer described as “New Found Glory with sugar,” these guys, alongside North Wales-natives Neck Deep, are building a strong case that the U.K. is doing pop-punk best right now. —Cassie Whitt

Despite being more than a decade into their career, Enter Shikari are still managing to evolve album after album, keeping themselves comfortably afloat in a sea of acts that are drowning all around them. “Anaesthetist,” which is taken from their most recent studio effort, The Mindsweep, captures the essence of stagnancy, slaps it in the face a few times and walks away, middle fingers in the air, saying, “We do what we want.” At first listen, the track is simply an aggressive approach to the band’s already refined, electronic-centered hardcore, yet it somehow manages to convey new dynamism and vitality, a sonic progression that makes just genuinely good music. —Tyler Sharp

Continuing almost decade-old tradition, Ronnie Radke brings his “Guillotine” series to Falling In Reverse for the first time with “Guillotine IV: The Final Chapter.” The latest, and what appears to be last, installment of the tracks that began back in 2006 while Radke was fronting Escape The Fate, “The Final Chapter” delivers an satisfying heavy song that holds true to its predecessors. A catchy chorus and a mixture of shouts and screams—both high and low—brutal breakdowns and, of course, Jacky Vincent sweeping through with one hell of a solo produces a song that fits right in with the three previous “Guillotine” offerings . —Nick Major

HIT THE LIGHTS – “Fucked Up Kids”

The rabid riffing on “Fucked Up Kids” is the fire that pop-punk maestros Hit The Lights needed for the new year. Summer Bones promises to be heavy and hook-filled, and teaming with Pure Noise Records means that mindset is encouraged. Rochester, New York hasn’t had anthems like this since Polar Bear Club and Such Gold were writing them. —Brian Kraus

SICK FEELING – “Frauds”
With a beastly lineage of players from deranged outfits such as Ink And Dagger, the Icarus Line and …Trail Of Dead, Sick Feeling are ready to walk on water, as long as it’s been set on fire. The band’s scary-come-lately frontman Jesse Miller-Gordon is a firebrand, never letting up on the menace: On “Frauds,” he sounds like Every Time I Die’s Keith Buckley cavorting in a mental institution in search of better meds and counselors to terrorize. The track is but one dispatch found on Suburban Myth, an ugly, cacophonous album teeming with driving riffs, Miller-Gordon’s psychosis and alluring textural distentions. Yeah, yeah, I know it’s far too early to start listing albums of the year, just like it’s too early to wish you a “happy new year” and then drive a garbage truck at top speed through the front of your house. —Jason Pettigrew

When I first heard that Sleeping With Sirens were going to be working with producer John Feldmann (The Used, All Time Low, Black Veil Brides) I could hardly contain my excitement. I knew the end result would be fantastic fun and “Go Go Go” proves just that. This track is upbeat, a bit poppy, and one of the most gleeful songs the band have ever put out. It’s rock songs like this that the radio needs more of and judging by the accompanying music video, the band are having a great time delivering joy. —Nick Major

Who wants to rock out? I live in Cleveland and it’s fucking winter—I need to rock out. “Loose Men,” a single from melodic sludgemeisters Torche’s forthcoming Restarter, fits the bill. Add a touch of glam bellowing to their characteristically beefy guitar base, and the result is an almost ‘80s metal homage that begs you to throw up the horns. The Miami metal men have always had a taste for fun, and “Loose Men” is bright enough to beat down winter blues. —Lee McKinstry

Hardcore’s groove masters bring it like never before on “Can’t Deny It,” a bona fide jam from beginning to end. Fronted by Trapped Under Ice drummer Brendan Yates, Turnstile’s sound can’t be justified by a “huge,” or even “immaculate” label, but rather, it’s an idiosyncratic breed of head-bobbing, blood-pumping, two-step-inducing hardcore that has the potential to take the genre to previously unattained heights—and “Can’t Deny It” is proof of that. So kick back, relax and prepare for the mosh to overtake your body. —Tyler Sharp

Gerard Way And The Hormones have delighted European audiences this tour with the debut of three unheard songs. While two of them (“Kid Nothing” and “Cheap Lights”) are brand new, “Don’t Try” is a remnant of the Hesitant Alien sessions he is now considering revisiting following positive response to the song, which he says is “BANGING live”—and we agree. Had the song made the album, this rhythmic anthem most certainly would have been a musical standout with lyrics oft-quoted on Twitter. —Cassie Whitt

WE ARE HARLOT – “Dancing On Nails”

The debut single from Danny Worsnop’s new band sounds exactly like you thought it would: high-energy radio-rock with a taste for ‘80s flash. Maybe it’s the gaudy gold and purple scarves in the music video, but the whole thing feels like a night out in Vegas—at one of the cheap casinos. Also: The vocal strain from screaming in Asking Alexandria seems to have made Worsnop a better, raspier “rock” singer. —Matt Crane

YOU, ME & EVERYONE WE KNOW – “Does It Amaze Thee?”
The neurotic rock (neurock?) of YMAEWK is back to its glorious, upbeat self on this lead single from the Dogged EP. (Interesting title for a band that was once on Doghouse Records!) Singer Ben Liebsch carries on across the chorus, “Does it amaze thee/That I can be this banged up/And still thrive?” Naw, Ben, we knew you had it in you. —Brian Kraus