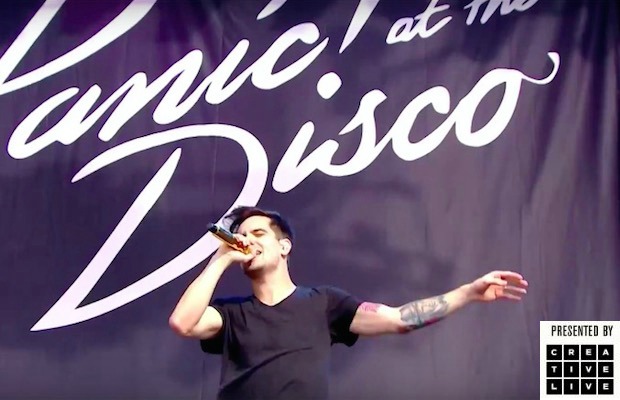 Sometimes the rock world can get noisy, and we don’t just mean in decibels or static. Often the signal-to-noise ratio is more noise than signal. But no worries: We read, listen to and watch everything so we can sort it for you. Here are some of our favorite new songs and videos of  September 2015 brought to you in partnership with our friends at CreativeLive.

Take a quick look at the headlines, from Trump to Syria, from climate change to our nation’s sad spiral toward Mike Judge’s soothsaying Idiocracy, and it’s easy to see we need BoySetsFire more than ever. The Delaware melodic-hardcore punks have stirred up debate for nearly two decades now, outlasting naysayers and industry sycophants alike. They’ve raised children (both literal and other bands/side project variety). “One Match,” from the band’s new self-titled sixth album (their second for Bridge 9), feels like home. Even people who could care less about income inequality, LGBT rights and the rest of the pressing issues of our time can’t deny the instantly memorable bounce and uplifting vibe of this track and the accompanying music video that dropped two weeks ago. vRyan J. Downey

Daughter's long-awaited follow-up to their mesmerizing 2013 LP, If You Leave, won't arrive till early next year, but the album's lead single is everything fans of the London trio could hope for. “Doing The Right Thing” is a slow-burning beauty from beginning to end, with Elena Tonra's breathtaking vocals leading the charge for the first taste of what's sure to be one of the best albums of 2016. Grab some tissues, take a deep breath and prepare to be moved. —Brian Leak

With a little more than a month left until Handguns’ fourth studio album is released, the band gave us a glimpse of the album with Disenchanted’s title track. The song starts with a quirky few seconds of Taylor Eby messing up the opening note before it escalates into gang vocals.  The song is the epitome of upbeat pop punk but also showcases Handguns’ je ne sais quoi that transcends genres. —Heather Mulgannon

“I've been places I never should've been / Thinking thoughts I never should've been thinking,” cries Household frontman Josh Gilbert at the onset of their emotionally driven song, “I've Been Places.” The track, which is taken from the band's debut studio album, Time Spent, traverses the treacherous spaces between pernicious punk and heartfelt harmony, all while backed by Gilbert's multitude of self-professed uncertainties. While unquestionably young, Household have executed a level of genuine songwriting well beyond their years. —Tyler Sharp

Nü metal's little brothers in Islander dropped this single prematurely when the Pope announced his album of the same name. Flowing between P.O.D., Rage Against The Machine, Deftones and Glassjaw influences, vocalist Mikey Carvajal has managed to make a truce between the raw and the radio. Guitarist J.R. Bareis (also of Love And Death) is no slouch here either, riffing a melodic bed of choruses but mostly chunky, headbanging heaviness.  —Brian Kraus

THE NEIGHBOURHOOD – “The Beach”

If “The Beach” is any representation of what we can expect to come out of the Neighbourhood’s forthcoming LP, Wiped Out!, there’s no doubt the desolate aesthetic we’ve come to know from them is only going to be amplified on their sophomore album. With their traditional beach-vibe beats and aching lyrics “The Beach” leaves you wondering whether to play it to set the mood or tear your heart out. Either way, this track will leave you aching to run to the West Coast to find the Neighbourhood’s Californian way of life.  —Jake Hanson

NO DEVOTION – “I Wanna Be Your God”

A song so perfect, it takes 15 minutes after it's done playing for the hair on the back of my neck to settle down. In slightly less than four minutes, Geoff Rickly conjures urbane cool and strident emotion while his Welsh bandmates create a vista of compelling textural shifts, atmospheres and moods capable of opening the minds of new-gen music fans, as well as middle-aged folks ecstatic over the current Swervedriver and Ride reunion tours. Simply put, No Devotion's Permanence is one of the yea…uh, century's best debuts. Take their train through the ether right now. —Jason Pettigrew

PANIC! AT THE DISCO – “Victorious”

If P!ATD’s new material were sibling stereotypes, “Victorious” would be the unpredictable wild child, jumping on furniture and screaming in people’s faces. Unleashing a cavalcade of classic pop culture references within its first seconds, this eclectic track rapidly bursts into an aggressive rhythm accompanied by Brendon Urie’s glass-shattering wail. Good luck to all venues who play host to P!ATD when this song becomes a part of their set. Expect explosions! —Cassie Whitt

AP recently premiered the new video for “Cry Out,” the killer single from Japanese punk powerhouse ONE OK ROCK. The anthemic, melodramatic post-hardcore is crackling with emotion and really showcases the band’s U.S. crossover potential. Some of the lyrics—”Bite the bullet then pull the trigger, hold tight”—make me think this band will fit in just fine in our scene. —Matt Crane

SET IT OFF – “Wild Wild World

Of the many things that I have strong opinions about, people in positions of power using their platforms for good is close to the top of the list.  So when Set It Off released the video for “Wild Wild World” this month, I couldn’t help but be proud. It’s nice to see that they aren’t afraid to use their position to talk about controversies in our world and social injustices.  The inclusion of people like Patty Walters and Lynn Gunn definitely doesn’t hurt. —Heather Mulgannon

STATE CHAMPS – “Around The World And Back”

State Champs have been releasing new music left and right—and no one is complaining. Their latest, the title track from the upcoming album cuts away from the tone of the three previously released singles. While “Secrets,” “Losing Myself” and “All You Are Is History” were defined by thrashing drums and cutting lyrics, this song explores love and the crushing fear that accompanies it. Guest vocalist Ansley Newman of Jule Vera is a perfect highlight for the latter half of the song, slaying her own verse and accompanying vocalist Derek DeScanio on the final chorus. When the two chime in together for the final lines: (Sometimes I can’t help but say/We’re making history/Our history}, even the most cynical emo will shed a tear.  —Mackenzie Hall

The World Is A Beautiful Place & I Am No Longer Afraid To Die, the Connecticut-based musical collective with a revolving door of contributors, has always been a step above their peers in songwriting ability. Known for performing with upwards of nine musicians onstage, their grandiose sound has remained their trademark through multiple well-received projects over the past handful of years. No TWIABP track better displays this lush and robust style than “Ra Patera Dance” from their new LP, Harmlessness. Weaving their brand of indie rock with elements of contemporary emo, as well as strings, horns, synthesizers, and the vocals of singers David F. Bello and Katie Shanholtzer-Dvorak, this track is a dynamic accomplishment in songwriting and a wonderful indication of what TWIABP are capable of doing in 2015. —John Bazley