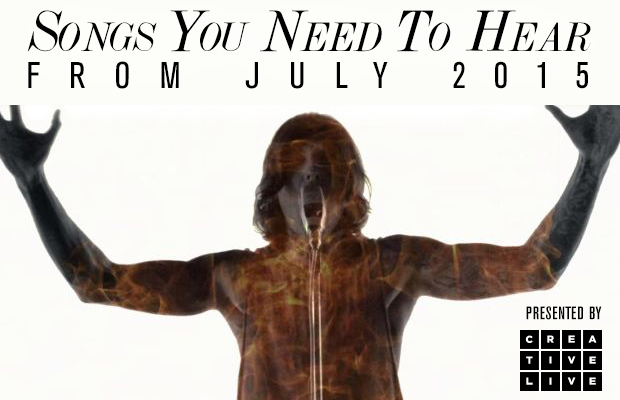 Sometimes the rock world can get noisy, and we don’t just mean in decibels or fuzz. Often the signal-to-noise ratio is more noise than signal. But no worries: We read, listen to and watch everything so we can sort it for you. Here are some of our favorite new songs and videos of July 2015 brought to you in partnership with our friends at CreativeLive.

Bring Me The Horizon – “Throne”

Wow, didn’t see this coming. Bring Me The Horizon just made that really good Linkin Park single you’ve been wanting since Hybrid Theory. This song trembles with raw power—the antagonizing synth, the harp (!), the guitars. When Oli Sykes screams in the chorus (“Every scar will build my throoonnne”), his voice is progressively drowned out and buried in the mix, with the synth overpowering him. It’s chilling to hear.—Matt Crane

On July 25 at the stroke of midnight, Emarosa quietly dropped these four new “reimagined” Versus versions on us. Quiet is also the theme on these tracks, but they're no less endearing the second time around. Soft soulman Aaron Marsh (Copeland) produced them to be worthy counterparts (and he adds vocals to one). Our pick of the litter, “I'll Just Wait,” was already primed for this treatment—but reigns as a true ballad with patient piano, orchestration and Bradley Walden's breathtaking falsetto.—Brian Kraus

At the tail-end of this month, FVK took us by surprise with the sudden release of “Braindead,” their first new studio recording since the release of their sophomore full-length, 2014’s Unbreakable Hearts. The track, an exploration of isolation with an undead twist, sees co-vocalist Kier Kemp showcasing the breadth of his range, dwelling more in his low register as the band switch between rhythmic, bass-focused pop-rock and their familiar, layered and melodic finesse. It will be released August 21 along with another track titled “Danger” as a double A-side single.—Cassie Whitt

During the past few years, we said farewell to the like-minded musicians of the Swellers, Hostage Calm and Polar Bear Club. Everything is cyclical, and in addition to former AP 100 Bands You Need To Know pick Somos, we're expecting LA's Home Movies to help refill this space. “Hell” is a brazen kick-off to their EP of the same name, refusing to waste your precious time with rolling riffs and spit-lipped vocals topping sweet harmonies. Yeah, you've heard it all before, but that's why you’ll love it. Look out for the whole EP to premiere on AltPress.—Brian Kraus

Picking favorites off Knuckle Puck's debut LP is like choosing your favorite kid—if you had way too many of them. We've already talked about the singles, so here's a deep cut at the tail end of Copacetic (their new album, no connection to Local H). Aggro vibes and crunchy tones celebrate the bitterest of huffed-out lines “Pretense” has to offer (“I'll leave you in the dark with a broken flashlight.”) Do I smell a new merchandising opportunity?—Brian Kraus

The next chapter in Christofer Drew's career is unveiled with this meticulously arranged piece of pop whimsy. Producer Dennis Herring makes Drew's affable PMA sound fuller and richer than the singer's previous work, thereby giving Drew a wider realm of sonic possibility to expand upon. “Red Balloon” sounds great hanging out with your friends on a hot summer day; reassuring when you're stuck in rush hour traffic; and populist enough to be played as bumper music between segments of whatever vapid television morning show you're addicted to.—Jason Pettigrew

To commemorate the whopping 250 shows the band played in 2014, Toronto pop-punks PUP released this charming and honest animated catalogue of the trip's highlights. They aren't all good ones, and the video's rough, endearing edges makes it one of the best chronicles of a working band's struggles in a long time. Notable highlights include acid trips, sleeping on fans' floors, bones broken after falling from venue rafters, playing to an audience of two and the band's first European tour. In the video's last moments, they finally see their work ethic pay dividends pay, as a crowd of hundreds greets them at what could be Warped Tour (where you can still catch them, for, like, a week!). The last frame is a live-action shot of the band walking off stage, a reminder that these larger-than-life adventures happened to real people.—Lee McKinstry

I’ve said it before and I’ll say it again: PVRIS is way too good for this cruel world. I feel like I’ve spent my life waiting for a band that weaves a lush darkness into a synth-fueled pop genre so effortlessly. Drawing in some of the most sizable crowds of Warped, PVRIS has been teetering on the edge of “the next big thing” for so long that it’s high time for them to actually be the big thing; this video might be what does it. With the release of “Fire,” PVRIS has dropped videos for half of their debut album, White Noise, but there’s a fresh layer of confidence and performance on this clip perfectly suited for the most powerful track on the record. Their energy is so refined and distinctly PVRIS that it very well could be “Fire” that finally breaks them away from the constant Paramore comparison. I’ll be here waiting on their sixth video. And the seventh…—Kika Chatterjee

Slaves – “Burning Our Morals Away”

“Burning Our Morals Away” is a vibrant rebound from Slaves’ debut album, Through Art We Are All Equals, which ultimately fell short in the face of its true potential. In the past, Jonny Craig tended to hinder himself by sacrificing crucial harmonies for the sake of pushing his voice too far, whereas here he finds his true niche between equal doses of passion and reservation. His melodies brush gently against the track’s pseudo-aggressive instrumentals, proving that musically, Slaves are far from dead.—Tyler Sharp

When we interviewed State Champs guitarist Tyler Szalkowski about Around The World And Back in our Most Anticipated feature, the album was in the wee stages and still unnamed. Still, Szalkowski guaranteed no curve-balls in following the Finer Things. “Secrets” puts his words into action. This pop-punk banger doesn't need a grace period to alpha all over their set list, as they're shown crashing more cities than Carmen Sandiego in this clip. Screw a lyric video, 'cause you won't need subtitles for these choruses—they're anything but subtle (“I've got more secrets/Than you'll ever know/Another year/And you won't let it go”).—Brian Kraus

Stray From The Path – “Badge & A Bullet Part II”

Stray From The Path slam through “Badge & A Bullet Part II,” the second single released from their upcoming album Subliminal Criminals, with piercing guitar riffs and declarative, politically charged lyrics that demand to be chanted at the top of any fan’s lungs. “Which side are you walking on? Which side, tell me which side,” shouts vocalist Drew York. You can’t help but think of Rage Against The Machine when jamming to Stray From The Path, as both groups communicate strong messages and rip through chords that force you to bang your head. Subliminal Criminals is due out August 14; pre-orders are available now. —Chelsea Renee Scofield

We Came As Romans – “Tear It Down”

The dudes in We Came As Romans have returned with their fourth hard-hitting studio album, packing just as much punch but marching to a new beat. “Tear It Down,” one single released from their self-titled album, offers a heavy introduction followed by a catchy chorus and one of the most epic breakdowns I’ve heard in a while. It’s the kind of song you rock out to in the car with your friends on the way to Warped Tour with the windows rolled down. Oh, and don’t forget to check ‘em out at Warped once you get there! —Chelsea Renee Scofield