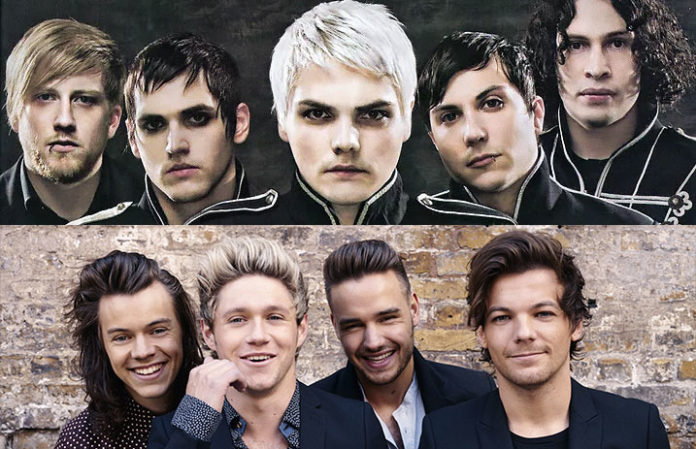 You might know them for singing about what makes you beautiful, but deep down, this boyband are really the most emo among us. Here are 12 times their emo-ness got to be too much to handle.

Look, we couldn’t even wait more than a point in to acknowledge this: He left, guys. Like, “Alright, we’re in Jakarta, you know what, I think I’m just gonna mosey on outta this boyband thing. LATER.” And then there were four. What gets more emo than that?! Whatever, it’s been two years, we’re totally over it. (We’re not, but you’d be able to tell that by our passive-aggressive away message.)

The “Story Of My Life” music video

The debate of what’s the most emo One Direction music video is a heated one, but we’ve got to give top honor to this cut off of Midnight Memories. The guys slowly transforming into scenes from their childhood…with their actual families… yikes. And if you think it isn’t sad enough, just wait until the end…

Actually, remember when @Louis_Tomlinson wore Brand New artwork on his shoes? Louis – do you want a job? pic.twitter.com/wNkzt0SeRE

And this wasn’t the only wear, either—he’s sported them onstage a few times as well. We have a feeling he probably screams along to “Seventy Times 7” when he drives home from concerts. Us too, Louis.

Harry being an emo teenager

For his issue of AnOther Man, Harry’s sister Gemma wrote a memoir of sorts. While it’s sweet start-to-finish, she also has a pretty hilarious plug of Harry in his middle school days: “As a wave of emo teenagers took over [our hometown], we both caught the bug with our floppy fringes and studded belts. To get the look he tried stealing my straighteners to attack his curls—and failed, enlisting my help to smooth his hair into submission…The skinny jeans never went away.” Right there with you, Harold.

In his second performance as a solo artist, Louis sported quite the looker of a jacket that definitely has some emo roots. We’re not okay.

Bringing 5 Seconds Of Summer on tour

You can call 5SOS whatever you want, but One Direction always called them “the emos.” Obviously it’s cause they were jealous and longed to hold the label themselves…

Harry's nails are painted I'm living for this pic.twitter.com/L7sHF0B3rs

Harry has sported some nail polish on multiple occasions, but it reached an emo peak when he arrived to the AnOther Man launch party sporting black polish. All he’s missing is the hair swoop.

As a way to promote their 2013 album Midnight Memories, someone at 1DHQ thought it would be a good idea to have the boys host a seven hour livestream. It was a gorgeous, ridiculous trainwreck punctuated by Niall dyeing his hair purple during the stream. So, he basically invented #tumblraesthetic.

Louis have given GD a few different Twitter shoutouts, but this example from 2013 is one of the best. We’d definitely love to see what Louis’ “old punk days” looked like…

Look, they’ve all worn some band tees from time to time, but this entire outfit just screams “cool 11th grader who sat behind me in math and knew every word to every Taking Back Sunday album.” Complete with hair swoop and torn black jeans. C’mon, Zayn.

In a surprising move, Niall was the first of the 1D boys to release solo material post-hiatus. A plucky acoustic ballad, this definitely has some roots in emo.

The boys backstage in Melbourne… Only 3 shows to go in OZ 🙁 it's been ace! 1DHQ x

On his days off, Louis’ wardrobe definitely falls more into “bro at Warped Tour” than “posh boybander.” His never ending love for Vans further puts him in the emo category. Here’s one of (many) examples.