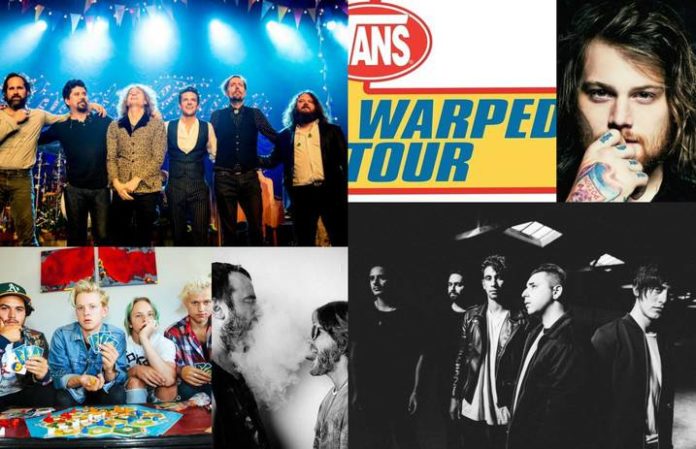 1. Taco Bell is showing California punk rockers SWMRS, whose debut album was ranked one of our best from 2016, some love in their new commercial. Check it out below!

The band’s song “Figuring It Out” plays in the background, and it’s only fitting since SWMRS are currently one of Taco Bell’s Feed The Beat artists. The Feed The Beat list also includes the likes Beach Weather, Speak Low If You Speak Love, Waterparks and more.

2. The Killers announced a vinyl reissue of their 2004 debut album Hot Fuss, set for a Jan. 13 release.

The LP is being released on standard weight vinyl and as a limited-edition white vinyl pressing.

3. Palisades announced that they’ll be heading on tour with Lacey Sturm, Stitched Up Heart and Letters From The Fire next spring. Check out the full list of cities and dates below!

Stoked to announce that we're heading on tour with @LaceySturm in January with @stitchedupheart and @LFTFmusic. See you all there! pic.twitter.com/WuzkheIygP

Check out the dates of the two intimate performances below, and preorder his debut solo album The Long Road Home, which is set to be released Feb. 17 via Earache, here.

5. So What?! Music Festival announced that the Story So Far, Knuckle Puck, Can’t Swim, Capstan, Sleep On It and more will be headed to the Texas festival come March.

The festival already announced Forever The Sickest Kids, Mayday Parade, Every Time I Die, Dance Gavin Dance, We The Kings, Attila, Emmure, After The Burial and more for the festival, which is scheduled to take place March 24 through March 26.

6. Warped Tour was ranked No. 1 for voter registration for 2016 tours.

Thank you to everyone who made @VansWarpedTour #1 in voter registrations this summer in association with @HeadCountOrg pic.twitter.com/8vKSWNkFvx

The 2016 Warped Tour beat out Dave Matthews Band, Phish, and Dr. Dog among others.