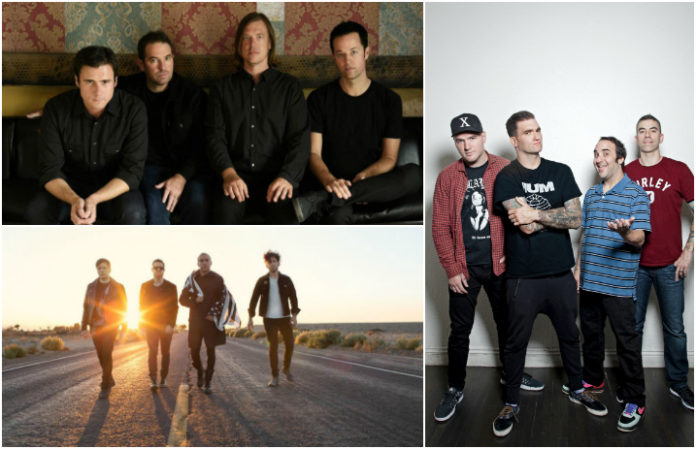 Christmastime can be a joy or a drag—sometimes both. Thankfully, our scene has provided plenty of festive musical fare to boost your Yuletide spirit and help combat those Christmas blues.

However you celebrate the season, here are 12 tinsel-tinged tunes to deck your halls with the right amount of pop-punk (and other) cheer!

MxPx’s “Christmas Day” was the first of the “Left Coast punk” band’s annual holiday songs, setting off a string of seasonal singles sent to the tireless trio’s fan club members. (Most of the group’s Christmas tunes were later compiled on their Punk Rawk Christmas collection.) The bridge section of “Christmas Day” is perhaps the most wistfully sublime middle eight ever penned by the boys from Bremerton, Washington.

My Chemical Romance – “All I Want For Christmas Is You”

Although numerous bands have tackled Mariah Carey’s Muzaked-to-death “All I Want For Christmas Is You” (Against The Current, Bright And Early, Divided By Friday, States—just to name a few), none manage it with quite the same charm and gravitas as Gerard Way’s downcast Cosa Nostra. The My Chemical Romance frontman’s scream-sing plea to “make [his] wish come true” is eons more believable than Carey’s department store ditty.

Fall Out Boy – “Yule Shoot Your Eye Out”

On “Yule Shoot Your Eye Out,” Fall Out Boy took their beloved penchant for merging millennial cultural milestones with savvy wordplay and youthful heartbreak to ruefully recite a failed relationship’s Christmas fallout. Its title a twist on Santa Claus’ well-known weaponry warning from A Christmas Story, the clever epithet is bleakly juxtaposed with Patrick Stump’s sorrowful, seasonal send-off: “Merry Christmas, I could care less.”

New Found Glory – “Nothing For Christmas”

New Found Glory’s “Nothing For Christmas” kicks off Fearless Records’ Punk Goes Christmas compilation, but it first appeared on the band’s own A Very New Found Glory Christmas EP. Seemingly one of the few pop-punk Christmas tunes with a naturally merry narrative, NFG singer Jordan Pundik serenades his sweetheart with words of syrupy satisfaction: “Christmas is coming, so don’t buy me anything/I got what I wanted, I got what I needed, it’s you.”

Another song from Punk Goes Christmas, Set It Off’s “This Christmas (I’ll Burn It To The Ground)” is probably the creepiest lark of the lot. Sounding earnestly akin to something from The Nightmare Before Christmas soundtrack, the ominous canticle laments the “awful time of year” and imparts to all rosy-cheeked anklebiters that “Saint Nick is gone for now.”