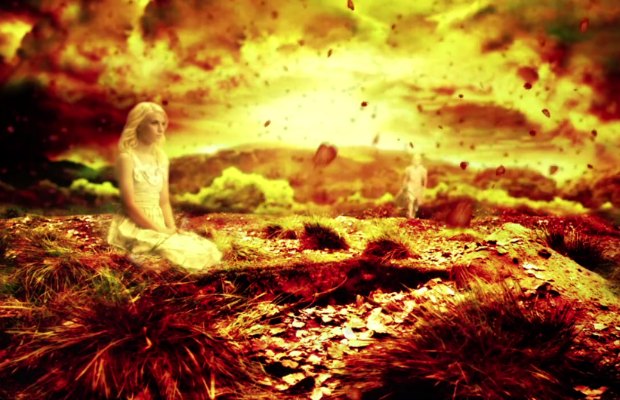 Think about some of the recent music videos you’ve seen. Chances are, most of them have been pretty bleh. It’s rare (usually due to the limited resources of this industry) that we see videos with concepts beyond:

[Enter: Band. The room is dark. There are some exposed lights. They stand prepared to play.]

So, today, we’re cleansing your eyes of the standard warehouse performance video redundancy by celebrating videos that take you out of the ordinary so far that you’re no longer in reality as you know it, but in a much cooler world created to accompany these songs.

BRING ME THE HORIZON – “IT NEVER ENDS”

BMTH’s “It Never Ends” video is part animation, part reality in its exploration of trust, helplessness and being at the cusp of death at the hands of toxic people who are out to kill you—metaphorically, of course.

A DAY TO REMEMBER- “2ND SUCKS”

While this one does feature performance footage in a dimly lit room, I can forgive it because the crux of the video is a group of kids getting sucked into an arcade game that features ADTR duking it out in boss,  Mortal Kombat-style battles.

Last year, Direct Hit! began a multi-part video series accompanying their album Brainless God, which takes you on a journey at the end of the world, through purgatory and back to Earth. Here’s a directory of some of the clips.

FROM FIRST TO LAST – “THE LATEST PLAGUE”

The members of FFTL represent their lives prior to the band with horrific visuals of a too-tiny house, an Orwellian classroom and creepy angels descending upon them between padded walls.

Paramore’s broken fairytale song “Brick By Boring Brick” transports you to a golden fall wonderland filled with butterflies, winged creatures and magic. Not only is it visually stunning, but the symbolic ending will break your heart.

Oh, that’s just a hotel, nothing extraordinary about th—? Um, what the hell is that black gunk? Are they turning into birds?

What even is that thing on the wheel zooming through the fantastical landscape in this video? I don’t know, but we’re pretty stoked that it and the tall thing with the top hat don’t actually build structures in this world. Or do they?

Music is the ultimate healing tool in Saosin’s “You’re Not Alone” world, set in a dusty, depressed steampunk-style town with Seuss-like slanted structures.

Director Max Moore challenges your perception with the use of the color red, showing you an alternate universe where water is red, or—as the title implies—blood, and blood is… Well, you’ll see.

UNDEROATH – “WRITING ON THE WALLS”

The viewer becomes a witness to the struggles of several troubled characters stuck in the setting of an open-faced dollhouse. While watching, you too might struggle a bit with these claustrophobia-inducing shots.

The Used play out the ultimate fantasy of every child who has ever wanted to jump into the pages of their favorite storybook.