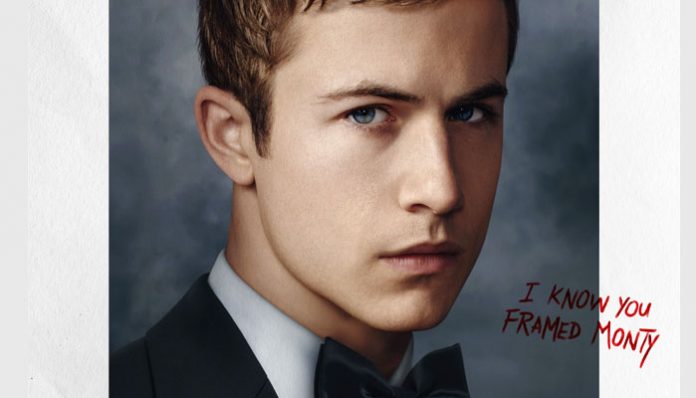 Actor Dylan Minnette is known for two things. The first is his portrayal of Clay Jensen, the heroic but flawed high school teen in the acclaimed Netflix drama, 13 Reasons Why. The other is his participation in the alt-rock band Wallows. The trio’s effected-guitar sounds range from languid to melancholy, bringing a new consciousness toward music not created with laptops and samples. So why has it taken so long for him to pick the music for the show?

And then Brian Yorkey summoned him. The 13 Reasons showrunner asked if Minnette would assist in picking the music for the penultimate episode. It was a no-brainer move for the actor. His choices for the next-to-last episode range from electronic dream pop to modern soul to unbridled pop-rock. (He had an assist on that last one from his girlfriend, Lydia Night of L.A.-based band the Regrettes.)

Read more: No secrets are safe in the final ’13 Reasons Why’ season’s trailer debut.

Minnette spoke with AltPress about what it takes to pick songs for a successful TV show, the effect 13 Reasons has had on him personally, his future and what he hopes happens to Jensen.

With the world in semi-quarantine, what are you doing? Working on music? Swapping files via the net with the other members of Wallows?

DYLAN MINNETTE: Yeah, we’ve been working on a lot of music remotely. Actually, we found a really fluid process, and it’s going really well. We’re finishing a lot of songs right now. Which is nice, for sure. It feels really good. I’m excited about everything I’ve been doing, luckily. It’s all about adapting to figure out how to change any sort of plan you had and be able to shift. That’s what we’ve been trying to do.

So you assisted picking the music for the near-last episode of 13 Reasons Why. What’s your credit? Music supervisor?

[Laughs.] I would think “music supervisor associate” or something. I’ve always had long conversations with Brian Yorkey, the showrunner, about the music from day one of the show. I’ve always tried to pick his brain on what he’s thinking at certain spots. And I’ve always given him suggestions. So I remember one time he talked to me and asked if I would help music-supervise an episode this season. I think it was just him being kind and collaborative and knowing that I care about the music on the show.

It became really interesting being a part of the process and how it works. It was actually really fun for me knowing all the music cues and then having to be on every email thread throughout [the project] and seeing how much goes into it. It’s a whole job unto itself. Brian is such a part of it, as well. Then there are the budgets involved like, “You can’t afford that song, but you can afford this one.” Just putting music on an episode of television is its own little production. There’s so much work that goes into it.

Read more: The ’13 Reasons Why’ cast says farewell in the first look at the last season

The choice of music is truly key to the show’s vision. You don’t need a band playing on the set. In the first season, you had the Lord Huron track (“The Night We Met”) that had a whole lot of resonance. Then there was Joy Division’s “Love Will Tear Us Apart.” How did you approach the actual work of selecting songs? Was it a balance of your personal taste, what was conveyed with previous seasons’ soundtracks or was it dictated by the script? Or all the above?

I have a pretty firm grip on what sort of music they like to put on the show and whatnot. So I knew what would be good or not really great suggestions. Essentially, it was really a collaborative process.

I watched the episode back again last night. I didn’t have a hand in a lot of the songs on that because a lot of the songs are already there in the background. For the bigger needle-drop moments, I was a part of the conversation. Just opening the door to me to say, “I don’t think that’s cool” or “I don’t think this works” or “I think this is tacky.” Then Brian would say, “I think it’s too slow. I think it’s too melancholy.” It’s interesting because it’s a prom episode, so it’s naturally an episode with a lot of needle drops. There’s a lot of pressure in these moments because Brian wanted some of [them] to be what the Lord Huron moment was. It’s tough! It’s tough to find the right songs, but I think what we landed on was really great.

One of the songs, “Best Part” by H.E.R. and Daniel Caesar, I remember thinking, “That song’s really nice. I hope it stays here.” And it did. And “Give Yourself A Try” by the 1975—which is a song that I love—was played during the process of shooting, as well. There’s another really important [song] that appears at a very emotional moment. And we ended up landing on “Would You?” by Richard Swift. It’s a beautiful song. Richard Swift was so talented and just incredible. And what an amazing human [and] artist. And that also fuels, you know, with his tragic death. I feel this beautiful moment, and then [it] makes me super-emotional when I watch it. I’m so happy that it made it in. I felt really honored to be a part of that process.

There are some other musical moments in the episode. My girlfriend is Lydia Night, who is in the Regrettes. There was a moment where all the kids are jumping to a specific song, and I thought, “That’s the same tempo as ‘I Love Us’ by the Regrettes.” I know that Brian is a huge fan of their craft, and he knows Lydia. And I was like, “Well, there’s this new song that I feel like is probably coming out around the same time.” And he’s like, “This is great. This would be perfect.” So they were all gung-ho about having it in the show. And at the time, it’s just a demo song that’s on the [episode]. I’m excited for it to come out, for sure.

I think every project I’ve worked on has changed me in some way. But this show quite literally changed my life for many different reasons. There are so many things happening in my life now that would not be happening without the show. I love everything else that I’ve been able to be a part of, but none of them quite have the impact that [13 Reasons Why] has had. I’m a part of something that really was quite a stamp in culture and pop culture and entertainment and just in the general world conversation. I’m very proud of that. It’s the kind of thing that anyone can remember where they were or what they were doing when it came out and what their opinion was. And [whether] you watch or not, it just felt like something that will always be remembered. And I’m really proud of the whole experience, for sure.

13 Reasons Why had very heavy plot lines and characters making hard decisions and mirroring real life in the hardest ways. For your next big acting project, do you think you’d go back to doing something similar to that again? Or something that’s a bit more lighter fare?

All it depends on is what comes along and what I like. I don’t have any idea of what comes next in acting. I might have something lined up, but I can’t talk about it. But if it happens, it’s extremely different from 13 Reasons Why in terms of the character.

If I wanted to plan what I think I should do next, I’d be going against anything I’ve done in the past. Because when I got the show, I was planning to be on the show. I didn’t want to be away from home for a long period of time. But I couldn’t deny this when it came along. I loved the script and everyone attached—and Netflix is doing so well on our side. This is a great thing to be proud of, and I wasn’t planning on it at all. Then I did it, and [it] changed my life. So whatever comes along, whatever resonates with me, whenever I think is good. I follow my instincts on trying to seek out, being a part of it like I always have and just hope for the best outcome.

Originally, I had no intention of doing any projects. This year, I was just gonna be touring all year long around the world with Wallows. But touring is not a thing anymore. And I don’t know when it will be a thing. So I feel like hopefully there’ll be the opportunity to do a project or two in acting before that goes back. I just want to do something that I think is a good follow-up to the show, which should be fun for me to do.

Step outside of the show for a moment and tell me what you think Clay Jensen ends up doing with his life.

Well, I don’t know how much I can reveal. But I’d like to hope if Clay makes it out unscathed, I just want that guy to find happiness. I want him to feel accomplished as I think he’s been able to help people and be able to help himself. All that dude wants to do is be a hero. Hopefully, he can do that in a healthy way.