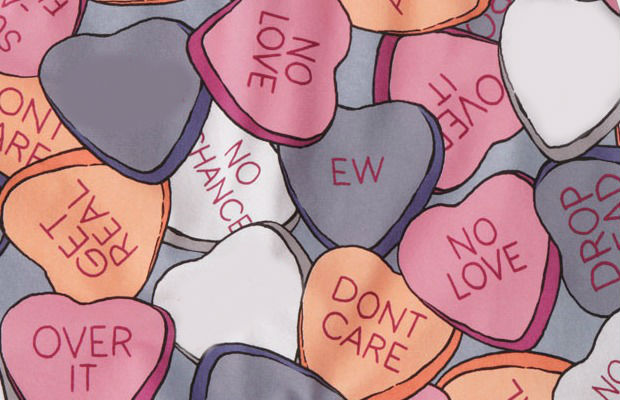 Annoying, sparkly and pink as Valentine’s Day may be, it’s also annoying to hear people incessantly whining about it. Don’t be that person. Turn up your headphones instead. The AP editorial team has crafted a sad and angry playlist just for you loveable Cupid-slayers!

BENJAMIN GIBBARD – “A Hard One To Know”

Benjamin Gibbard is known for crafting heart-twisting love songs as the frontman of Death Cab For Cutie, but on this track from his debut solo album, he sounds a bit salty. Underneath the quick-tempoed, upbeat guitar is a scathing review of a past lover who likes to “call a truce and then start a fight” and is known to “smother then disengage.” Yet even as Gibbard puts all her flaws out there–quite literally–he can't seem to stay away. His reluctance to leave is only fueled by her back-and-forth emotions. It's probably best to get out while you can, Ben. You'll never win this one.—Brittany Moseley

THE HONORARY TITLE – “Everything I Once Had”

In the second verse of this song, vocalist Jarrod Gorbel croaks the story of how he was dumped (by someone who, judging by these lyrics, was a pretty skuzzy human) on Valentine’s Day when he attempted to “avoid the red cliché.” He then proceeds to spiral into depression, culminating in what remain some of the most despairing wails I’ve ever heard in a song (check the 2:40 mark). This song provides all the proof you’ll ever need that allowing yourself to love someone is awful and you probably shouldn’t do it.—Cassie Whitt

“Your love is misery,” screams Hope Conspiracy frontman Kevin Baker in “Three Year Suicide,” a title which pretty much says it all. If his relationship felt like killing himself for three years, that's about as anti-Valentine as it gets. Your post-breakup gym mix could just be the 11 other heart-crushing songs on Endnote.—Brian Kraus

Any song that starts off with the line, “Screw you and die, I hope you burn,” is kind of a lock for a playlist like this, no? The rumor I always heard was that frontman Kenny Bridges wrote this song about an ex-bassist, but substituting in an ex-flame works just fine. “You're nothing, you're worthless, except for these verses” essentially sums up every single rock song written by a spurned lover ever—only this one's better than nearly all of those.—Scott Heisel

MORRISSEY – “That's How People Grow Up”

It's no secret that Morrissey is rock ‘n’ roll’s quintessential sad bastard. He also has one hell of a spiteful and vindictive streak. (Just ask former Smiths drummer Mike Joyce, who Moz effectively threatened to murder over a royalties dispute in 1997's “Sorrow Will Come In The End.”) But it wasn't until “That's How People Grow Up,” a track which first debuted on Morrissey's 2008 Greatest Hits album before appearing on 2009's Years Of Refusal, that the Pope Of Mope ditched the sorrow and longing for simply writing love off completely. Bitter and resigned, Moz belts lines like “I was driving my car/I crashed and broke my spine/So yes, there are things worse in life than/Never being someone's sweetie” and “I was wasting my time/Praying for love/ For a love that never comes/From someone who does not exist” for once, I feel like he might have found some form of closure, callous as it might be.—Philip Obenschain

After NYHC earlybirds Burn broke up in the mid-'90s, frontman Chaka Malik spearheaded a lesser-remembered but equally worthwhile post-hardcore project called Orange 9mm. On “Sacrifice,” there's a tribal lead-up to Malik's fierce condemnation of an ex. Unlike many hardcore singers, he didn't need a lyric video to be understood, and his obsessive repetition makes the song feel almost ceremonial. “Was there was a time when I'd say I had some trust in you?/There was a time but I'd say now that it's torn down.” Now that the trust issues are out of the way, there's room for the lasting regret. “You forced me to give up my fire, my life, my hopes, desire.”—Brian Kraus

SAVES THE DAY – “My Sweet Fracture”

“Could you tell me the next time that your choking?/I'll run right over and shove some dirt right down your throat.” And so begins Saves The Day's classic fuck-you anthem. Of course, Chris Conley is too clever to just litter a song with four-letter words; instead he opts for searing lines like “I took a piss that lasted longer than you and your manipulations.” Though he may be scorned, he isn't immune to fleeting thoughts of happier times gone by, comparing them to autumn, a season that seems to go by quicker each year (“Don't you love those leaves?/Don't you wish the orange stayed forever?”) By the end though, Conley is back to his sharp-tongued self singing, “I'd rather forget the days we spent/Than try to stay afloat in shallow water.”—Brittany Moseley

Why swing a hatchet into an ex-lover's brainpan when you canpray to the Almighty to do it for you? On this two-and-a-half minute primal therapy session, serrated-edge rockers Shellac deliver a minimal yet highly effective request to a higher power. Vocalist/guitarist Steve Albini makes a request that God kill off a former lover, tenderly suggesting she gets mortally wounded “to the base of her neck where her necklaces close/Where her garments come together/Where I used to lay my face.” Then he repeats the directive on how to dispatch her new man into the next world, sounding like a voice-memo reminder service serial criminals use. The mantra gradually grows more deranged and then plateaus, as if the singer's talked it out and the feeling has passed. Or has it?—Jason Pettigrew

The song title kind of gives it away, but this slab of heavily Get Up Kids-influenced turn-of-the-century emo-pop is a particularly nasty sendoff to a former belle. You can practically hear vocalist/guitarist Nate Hanyzewski get on his knees and plead,”Please die, please die, please die, please die” for a solid 60 seconds starting right around the three-minute mark–and it never gets old.—Scott Heisel

SLEEPING IN THE AVIARY – “Lanugo”

Feeling a little trapped in your relationship this Valentine’s Day? Maybe your friends are all buying the obligatory chocolate and roses for their significant others and you’re wondering why love is seeming more like an obligation than all those sappy love songs make it out to be. Well, fuzz doo-wop garage punk (with a little pop and California rock influences thrown in the mix) group Sleeping In The Aviary have quite the song for you. Caught in a relationship due to a seemingly unplanned pregnancy, if the woman didn’t know by the time the song was written that the relationship wasn’t going to work out, lead singer Elliott Kozel made himself clear in “Lanugo,” by repeatedly exclaiming “I don’t love you as I should love you now!” So, while you maybe shouldn’t play this song to anyone else for fear of the retribution that is sure to come your way from shattering a person’s heart less than a week before Valentine’s Day, “Lanugo” can be that song that you secretly play alone in your room. Oh, and in case you were wondering (because I certainly was), “lanugo” is the soft, fine hair that is found on the body of a fetus or newborn baby.—Mamie Silver

SLEEPING WITH SIRENS – “If You Can't Hang”

This track puts being burned by a cheater into words by taking listeners to the beginning of the doomed relationship and progressing to the ultimate ending. Nothing screams anti-Valentine's Day more than saying sayonara to a bad relationship with “if you can't hang then, there's the door, baby.”—Michele Bird