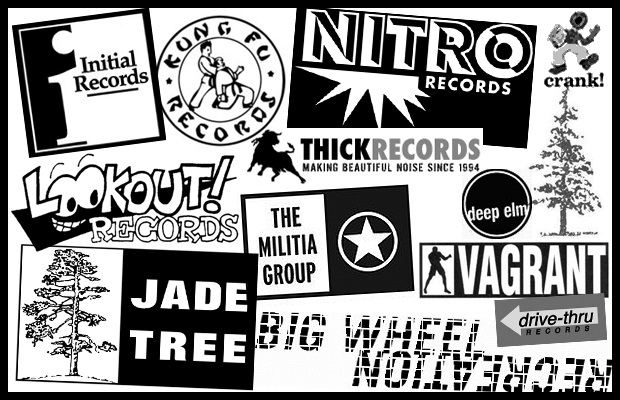 AP has seen many a record label hit the scene hard, create a huge buzz, move some serious units then, through a series of bad decisions, end up with their doors closed, with nothing much to show for it (except maybe a gold record if you played your cards right). Here are 13 labels we’re missing hard. Maybe if we pluck enough eyelashes and throw enough coins into fountains, we can get ’em back on the scene—this time with a better financial adviser or something.

Let’s start with the obvious: Drive-Thru gave the world New Found Glory, Dashboard Confessional, Finch, the Starting Line, Something Corporate, Fenix*TX, Rx Bandits, Midtown, Senses Fail, Hellogoodbye, the Early November and more—all within a span of a half-decade (1999 to 2004 was definitely the label’s glory years). Now they’re essentially shuttered, having not released anything since 2008 and letting their domain name, drivethrurecords.com, lapse. (Thankfully there are labels like Enjoy The Ride who have been rescuing some of DTR’s back catalog from purgatory and reissuing titles on vinyl.) We would walk across a bed of hot coals—or maybe just on someone’s back—to see the DTR of old make a comeback.

Okay, technically Vagrant is still an active record label, but the Vagrant we’re talking about is the one represented by that boxer logo above. That Vagrant was responsible for the Get Up Kids, Alkaline Trio, Saves The Day, Reggie And The Full Effect, Hey Mercedes and more. Basically, where Drive-Thru dominated pop-punk for the first half of the 2000s, Vagrant had the market cornered on the emo side (even snagging two bands from DTR, Dashboard Confessional and Senses Fail). The label has essentially cut all ties with their punk and emo past, instead focusing on Pitchfork-friendly indie rock like the 1975, the Hold Steady and Black Rebel Motorcycle Club. But we’ll never forget this label’s glory years—and what we wouldn’t give for the 2001 Vagrant America tour to re-form and come to our local rock club again.

If it was the ’90s and it was emo, it pretty much had to be on Jade Tree—the label became nationally known through the Promise Ring, which then led to Joan Of Arc, Jets To Brazil, Pedro The Lion and plenty more. Of course, while the label might’ve been a bit pigeonholed from Davey von Bohlen & Co., it was still a crucial home for quality punk and hardcore like Lifetime, Kid Dynamite and Strike Anywhere. After releasing more than 100 releases between 1995 and 2006, they’ve released less than a dozen since. Truly a shame, considering this label’s ear for quality talent was rarely surpassed.

Having started off with a series of 7-inch singles in 1995 (the most notable of which featured a pre-fame Nada Surf), Deep Elm hit its stride in the late ’90s with their Emo Diaries compilation series. The first volume alone featured previously unreleased cuts from Jimmy Eat World, Samiam, Jejune and one of the best songs ever written by any band ever (“Friend X” by Pohgoh). These comps broke the mold of the punk scene at the time, as they weren’t $3.99 cheapo CDs but full-priced collections that were focused on documenting a genre’s birth and blossom. Future volumes included Planes Mistaken For Stars, Further Seems Forever, the Movielife and more, but the quality (and name recognition) of bands dropped off significantly around Chapter 6—and there were still a half-dozen more installments after that (not to mention the three-part, ill-fated This Is Indie Rock series). The label has released more than 200 releases but the odds of you actually owning any of them past, say, the Appleseed Cast’s Low Level Owl Vol. 1 and 2 are slim—and those two albums came out 12 years ago. Most of what followed (outside of a brief burst of attention from Long Island punk band Latterman in the mid-’00s) has been forgettable copies of well-known post-rock bands.

Originally created as a booking agency in 1998 by former Tooth & Nail Records employee Chad Pearson, the Militia Group became an actual record label in 2000 when Rory Felton came on board and discovered Rufio, whose debut album, Perhaps, I Suppose…, has sold more than 100,000 copies to date—and that was TMG’s first release. A quick influx of cash resulted in a slew of signings, with a few—Cartel, Copeland, the Rocket Summer, Acceptance—finding commercial success and major-label record deals. A string of poorly performing records doomed the label, though, and in 2012 they announced on their website that TMG was going on “indefinite hiatus.” Don’t expect a reunion tour any time soon.

When your very first release is one of the quintessential documents of the ’90s screamo scene (1995’s Eucalyptus compilation, featuring Indian Summer, Boilermaker and more), you’re probably gonna have a good run. Thus began Tree Records, a crucial yet sadly underappreciated label that was responsible for documenting some of the more esoteric corners of the punk and emo scene (Pinback, Franklin, Ethel Meserve). But what they’re best remembered for was Post Marked Stamps, a series of nine split 7-inches with gorgeous handmade packaging that you were almost afraid to open and exclusive songs from the likes of the Get Up Kids, Braid, Rainer Maria, Tim Kinsella and more. It’s still the gold standard nearly 15 years later for any label looking to pull off a cool mailorder subscription series for collectors. (Don’t forget the 10th single that was exclusive to subscribers.) The label ceased to exist in 2003 after only around 30 releases, but they’re pretty much all worth owning—especially Franklin’s self-titled album. (This editor swears by that record being a totally life-changing one.)