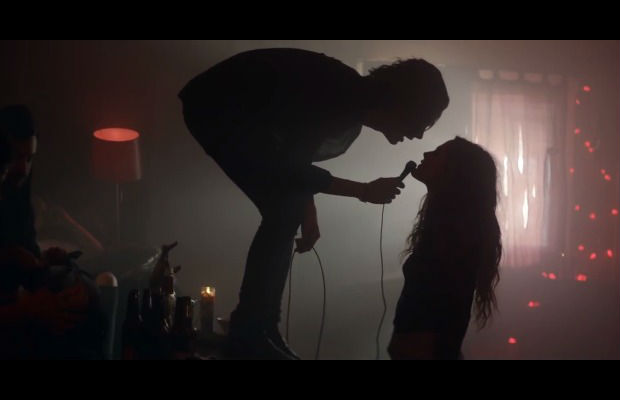 While we know it's super trendy (and cathartic) to post a list of anti-love songs on Valentine's, this year we're drinking the Kool-Aid. That sweet, plastic candy heart Kool-Aid. Here are 13 songs that genuinely have us in the mood for love, or at the very least, mutually sharing a mouth of mayonnaise.

(And for the love averse, here are 13 Anti-Valentine's Day Songs to get you through the day.)

While romantic love isn’t something I can empathize with most of the time, I’m prone to falling for Bonnie and Clyde fantasies like a sucker. In “Robbers” (and the accompanying music video), the 1975 tell a tale of dangerous, somewhat unhealthy, young love, providing quirky, minute character details like “you’ve got a pretty kind of dirty face” and “babe, you look so cool” (covered in blood after you’ve been shot) that convey the whole story in under five minutes. Yeah, maybe it’s not responsible to romanticize crime sprees, but there’s something freeing about the idea of loving someone so much that your own mortality slips your mind. —Cassie Whitt

If Alkaline Trio vocalist/guitarist Matt Skiba isn’t on your shortlist of cool-as-feck rock dudes, you’re beyond saving—stick a fork in your ass, you’re done. One reason of many: “Clavicle,” a song that’s the perfect blend of genuine yearning and restraining-order obsession. When he sings, “I wanna wake up naked next to you/kissing the curve in your clavicle,” all the world’s lonely want to know how that feels. In two-and-a-half minutes, Alkaline Trio reconcile classic human sentiment with a smidgen of mania. Hands up if you want to hear A3 soundtrack the 50 Shades Of Grey sequel… —Jason Pettigrew

BETWEEN THE TREES – “Changed By You”

Between The Trees' “Changed By You” is a song that manages to conjure the feeling of true love and showcase it among soothing melody and a heart-wrenching piano line. Sure, it may be on just about every mixtape I've ever given to a girl, but there's an aspect about “Changed By You” that far surpasses the tackiness of a lovey-dovey, radio-ready single. Rather, it transcends the realm of materialism into something palpable, yet ethereal; something definite, yet abstract. Simply put, “Changed By You” is a voice of grace a love letter wouldn’t be able to cover. —Tyler Sharp

Are you hoping to get back the one that got away this Valentine’s Day? Blink-182’s Tom DeLonge has been there a few times before at least according to the lyrics in “Always.” Lines like “I’ll miss your laugh, your smile” and “I'll take you back if you'd have me” echo what many heartbroken individuals are probably feeling this love-filled season, but what brings this song full circle is the chorus. “Come on let me hold you, touch you, feel you, always. Kiss you, taste you all night, always” is one sexy plea and the music video sustains the longing as we see each member of the trio trying to win back the same girl. Which band member is victorious in this quest to get back the girl? You’ll need to watch to find out! —Nick Major

BRING ME THE HORIZON – “Deathbeds”

This Sempiternal bonus track combines minimalistic ambience, near whispered vocals from Oli Sykes and forlorn harmonies provided by his fiancée Hannah Snowdon to portray the desperate and anguished side of love—a dark and deep yearning artists so rarely tap into. —Cassie Whitt

FROM FIRST TO LAST – “Emily”

Admit it: This was totally the first song you learned to play on guitar. “There’s no one in the world like Emily!” Sonny Moore shakily proclaims over a delicate acoustic work. It’s not impossible to discover the real identity of the mysterious and elusive Emily—but it’s damn difficult, mostly because she doesn’t want to be found anymore. Moore has a lot to say about her (“she’s simple yet confusing”), mostly adoring things (“her sparkling eyes make me weak at my knees”). But, most of all, he wants you to know that when it comes to getting to Emily, “Thunderstorms will never stop me.” Thunderstorms will never stop him, okay?. —Matt Crane

Blake Schwarzenbach gets struck by Cupid's arrow in the unplugged “Sweet Avenue” from 1998's Orange Rhyming Dictionary. It's a love song shining in a catalog of sadness, so the skeptics should take note, with endorsements that defect to hope (“This day could someday be an anniversary”), peeling back depression (“Now all these tastes improve/Through the view that comes with you”) and leaving your cushy isolation chamber (“Thank you for taking me from my monastery/I was dying to get out”). You have to admit, he makes a strong case for falling for someone. —Brian Kraus

In high school, I had an incredibly brief fling with a boy who liked French film, American Apparel and very vocally not much else. Yeah. The romance wasn’t there, but one night, driving me home, he played “Pants” by Lemuria, and I fell in love with them.  The song is irresistible; all messy jangle and garage-rock fuzz, we hear a catalog of all the tiny, imperfect, clumsy, endearing admissions that color a blissfully regular romance. It’s that last bit that makes the song so special—the normalcy it encapsulates, or rather, the magic we find in the corners of our normal lives. There’s no treacly metaphor, no high drama, no desperate proclamations. There’s butterflies. There’s feeling like an idiot. There’s short conversations and long make outs. Everyone gets these moments, and it’s that kind of miracle that never stops being surprising. Because, sometimes, there’s nothing that says “I love you” better than “I want my hands in your hair.” —Lee McKinstry

MY CHEMICAL ROMANCE – “My Way Home Is Through You”

The song title looks like My Chemical Romance were taking cues from witless bores Bon Jovi (who could remember “the steel horse” that singer rode in “Dead Or Alive”?) to convey the static bands have to go through for that one hour of stage time. But MCR were never hackneyed. See, most bands are started in an attempt to escape mundane living: Here, Gerard Way swears getting through gigs, road life, stage personas and demanding fans are the things he needs to do “just to get back in her arms.” And it’s couched in the prime rock fury MCR built their reputation on. All your Valentine’s Days should clock in at this many decibels. —Jason Pettigrew

NECK DEEP – “Head To The Ground”

This song perfectly captures the internal conflict of unexpectedly falling for another person when you don’t even know if you can deal with yourself: Vocalist Ben Barlow sums it up concisely in the hook: “And I hope I don’t drag you down ‘cause I’m starting to feel alright thanks to you.”  The loss of control when someone hits the brakes on your life and jerks the steering wheel can be both exhilarating and terrifying. Neck Deep harness that mystery and put your lows into perspective: That you can now conquer life’s shitty moments with a person who makes you feel rad. —Amber Funk

PANIC! AT THE DISCO – “The End Of All Things”

I’ve seen hardcore industrial-rock rivetheads—people who would rather burn down a disco much less panic in it—well up with tears at this electronic-tinged paean Panic! chairman Brendon Urie penned to his wife. The sensitive ballad is highlighted by the tasteful use of a vocoder that somehow, against all odds, makes the song sound more achingly human than the annoying robot stuttering we’ve come to expect from such technology. “In these coming years, many things will change,” he sings. “But the way I feel/will remain the same.” It doesn’t matter if you’re a scene kid lying in a patch of grass at Warped Tour with your honey or half of an elderly couple sharing a deathbed—let this song caress your heart. —Jason Pettigrew

Something Corporate’s fan-favorite nine-minute piano ballad isn’t a love song per se—it’s more of a love-breakup-what-have-I-done-I-want-you-back-but-I’ll-never-have-you-back-but-hey-I-can-dream song. Andrew McMahon claims that when he was young, he improvised the words of “Konstantine” to his ex while playing it onstage. McMahon sings, “I always catch the clock/It's 11:11 and now you want to talk/It's not hard to dream/You'll always be my Konstantine.” —Matt Crane

“There are moments when/When I know it and/The world revolves around us,” John Nolan sings on “Existentialism On Prom Night,” scoring the background of every scenester romance circa ‘04-‘06. Whether it was intentional or not, the vaguely hopeful track has been interpreted as a “love song”—especially as Nolan sings, “You would kill for this/Just a little bit/Just a little bit.”—Matt Crane