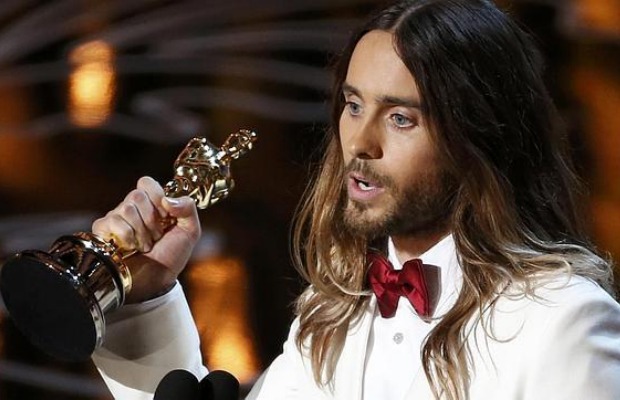 Last night, Thirty Seconds To Mars frontman Jared Leto took home the Oscar for Best Supporting Actor for his role in Dallas Buyers Club. While he might be the first musician to win in one of the “big six” categories of the Academy Awards in its 86-year history, Leto isn’t the first artist to win Oscar gold. The following musicians have all been honored for their creativity.

Nine Inch Nails majordomo Trent Reznor is a two-time Grammy winner, but he went to the next level with the score for 2010’s The Social Network, which he created with his longtime collaborator Atticus Ross. The pair won an Oscar for Best Original Score.

The man behind such new-wave classics as “Psycho Killer” and “Burning Down The House” scored an Oscar for Best Original Score alongside Ryuichi Sakamoto and Cong Su for their work in 1987’s The Last Emperor.

The most enigmatic man to ever come out of Minnesota won the Oscar for Best Original Score to his 1984 movie Purple Rain. The soundtrack has since sold more than 20 million copies worldwide, so it’s safe to say the Academy was right on this one.

Once is this writer’s favorite musical in decades, primarily because of its untraditional take on the format—and also because of the fantastic songs contained within, courtesy of the film’s two leads, who also comprise the indie-pop duo the Swell Season. Their song “Falling Slowly” won the Oscar for Best Original Song, and still sounds as perfect today as it first did nearly a decade ago.

7. BRET McKENZIE, FLIGHT OF THE CONCHORDS

You might know Bret McKenzie for his work on the HBO show Flight Of The Conchords, or from his Grammy-winning comedy band of the same name who have released albums on venable label Sub Pop. But in 2010, McKenzie was drafted to write songs for The Muppets, and his hilarious “Man Or Muppet” ended up bringing home the golden statuette that year for Best Original Song.

Wonder Boys producer/director Curtis Hanson was a huge fan of folk-rock legend Bob Dylan. Dylan, in turn, was a huge fan of Hanson’s previous film, L.A. Confidential, and agreed to allow him to use a number of his songs for Wonder Boys’ soundtrack—even going so far as to write a brand new tune, “Things Have Changed,” which ended up winning the Oscar for Best Original Song in 2000.

While Wonder Boys may have been a box-office flop, Hanson’s next flick, 2002’s Eminem-starring pseudo-biopic 8 Mile, was decidedly not. It’s grossed more than $242 million worldwide, and its soundtrack has gone five times platinum. Is it any surprise that its lead single, “Lose Yourself,” landed Em the Best Original Song statuette that year?

Sure, the Beatles have won eight Grammys, sold more records than any other musician on the planet and are more or less singlehandedly responsible for making rock ’n’ roll into a viable art form. But did you know John, Paul, George and Ringo won an Oscar, too? And they did it after they broke up? The quartet were nominated for Best Original Song Score for their documentary Let It Be, which was released a few days after the album of the same name came out in 1970—both happening after the band had broken up. While both the album and film received mixed reviews, it didn’t stop the boys from Liverpool from winning a Grammy and an Oscar that year for the soundtrack. Of course, none of them were present to accept the Oscar; music mogul Quincy Jones accepted on their behalf.