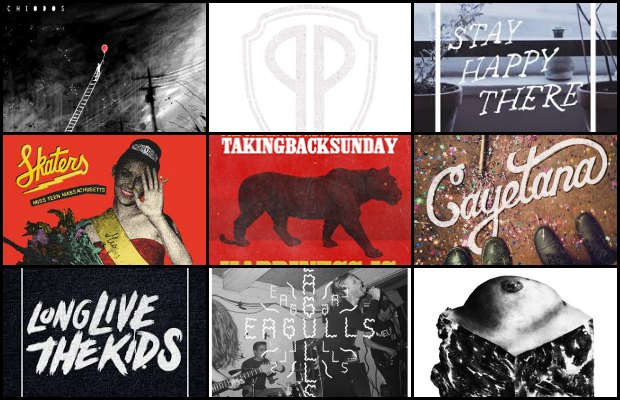 Sometimes the rock world can get noisy, and we don’t just mean in decibels or fuzz. Often the signal-to-noise ratio is more noise than signal. But no worries; we read, listen to and watch everything so we can sort it for you. Here are some of our favorite new songs and videos of January 2014.

AGAINST ME! – “Drinking With The Jocks”

There are plenty of great moments on the new album from Against Me!, but it's the seething diatribe “Drinking With The Jocks” that's completely worth the price of admission alone. One part boys-will-be-boys thuggery (“I'm drinking with the jocks/Laughing at the faggots/Just like one of the boys/Swinging my dick in my hand”), the other steeped in self-loathing about hanging out with that kind of vermin in the first place (“All my life/Wishing I was one of them/There will always be a difference/Between me and you”). The song is bracingly strident, brutally honest in its portrayal of entitled-male attitudes and positively furious sonically (two words: Atom Willard). Given Laura Jane Grace's transgender journey, the hurt and the confusion in the lyrics are still very much in the forefront of her mind. Fortunately, so is her conviction. [JP]

If you’re wondering who exactly Cayetana are, don’t worry: You haven’t missed the boat—yet. But you better hop on now because these three ladies from Philadelphia are about to be on a lot more radars once their 7-inch, Hot Dad Calendar, comes out next Tuesday. Besides its delightfully ridiculous title, “Hot Dad Calendar” is three-and-a-half minutes of boisterous, punky indie rock. The only thing better than the song is the music video which I can only assume came about when, while in the middle of an epic house party, the members of Cayetana looked at each other and said, “This would be the perfect place to shoot a music video.” And perfect it is.[BM]

“She’s in love/She’s in love with herself,” Craig Owens howls. It looks like the singer’s back to his old tricks. “And I never should’ve trusted someone else with my insides.” Yeah, he’s definitely back to his old tricks. The first Chiodos song since Owens’ return to the band hit the internet hard Monday with a flavorful sound faithful to the band’s legacy. But there’s a healthy dose of new in “Ole Fishlips Is Dead Now” (someone got catfished?) as well: The experimental nature of Thomas Erak’s guitar ripping begins to shine, right as Owens surely shreds his vocal cords with his loudest shriek yet. Welcome back, Chiodos. [MC]

EAGULLS, “Possessed”
We put U.K. post-punkers Eagulls in our 100 Bands You Need To Know In 2013 special way back in AP 297, and have spent the past year waiting for them to finally deliver their debut full-length. The wait is nearly over—Eagulls drops March 4 via Partisan Records—but to tide everyone over for just a few more weeks, the band recently dropped “Possessed,” a delicious slice of poppy post-punk (post-pop-punk?) loaded with thick slabs of guitar and vocals that sound like they were shouted toward a mic through an open window 15 feet away (that just happened to have a pop filter on it). Writing about music is like dancing about architecture, so just listen to it already, okay? [SH] >>>