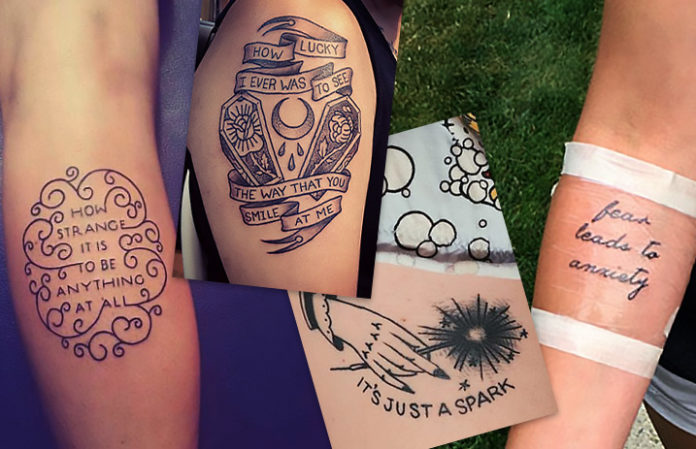 Let’s be honest, the feeling of a tattoo needle on skin can be downright addicting. And there’s almost nothing more satisfying than showing off some new art to all your friends. But before you make an appointment at your local shop, you have to figure out exactly what you want. You can let your tattoo artist bring your idea to life, design something yourself or simply press play on your favorite song and pick the line that speaks to you the most—just like these music-fiends did. There’s never a bad time to start brainstorming, so let these lyric-based tats serve as inspiration for your next session.

Prince – “Sometimes It Snows In April”

Never thought as I approach my 44th year I would get my first tattoo..thanks Henry, I'm completely in love with it! #princetattoo #sometimesitsnowsinapril #prince #raincity #obsessions

Panic! At The Disco – “Northern Downpour”

By Mike Meech Roehrich at The Tattoo Factory 2 in Wayne, New NJ.

Jack’s Mannequin – “There, There Katie”

November 4th has been a significant day for me for 6 years now. Sorry if you've followed me for awhile as I'm sure this is getting redundant… but, hey, I've made it another year and that seems worth acknowledging.

By Joey Gonyea at Eternal Tattoo in Livonia, MI.

By @guns_one at Ink Art Tattoo in Lima, Peru.

The Wonder Years – “Passing Through A Screen Door”

“I was kinda hoping you'd stay”

By Jason Perry at Forever Underground Ink in Spring, TX.

How I spent my lunch break. Thank you, @gareth_h_tattoos! #bowie #davidbowie #starman #tattoo

Fun little #the1975 tribute tattoo from today �� thanks again Nicole!

By Rebecca G at Twelve Ounce Studios in Deptford, NJ.

Fall Out Boy – “Save Rock And Roll”

Ever since I was a little girl I've had such a huge love for Fall Out Boy. They've been my all time favorite band for a few years now, and I see them every chance I get. 2 weeks ago from today was one of the best days of my life so far. I finally got to meet them and talk to them face to face. Pete Wentz is one of the people in the world that I look up to the most, and he wrote out my favorite lyric of theirs for me, even after security said he couldn't. I've met a lot of bands and singers in the last few years, and none of them will ever have as big of an impact on me as this one did. You are what you love, not who loves you.

Neutral Milk Hotel – “In An Aeroplane Over The Sea”

Courtesy of sasodudic on tumblr.

By Brett Eberhard at LDF Tattoo in Sydney, Australia.

Allison Weiss – “Out Of This Alive”

By Allie Marie at Revolution Tattoo and Gallery in Chicago.

Courtesy of critical veiins on tumblr.

A slightly better (but still bloody) photo. So in love.

Against Me! – “Two Coffins”

By Nicole Nowicki at Tattoo Zoo in British Columbia, Canada.

What do you think of these lyric tattoos? Have any of them inspired your next trip to the shop? Sound off in the comments!