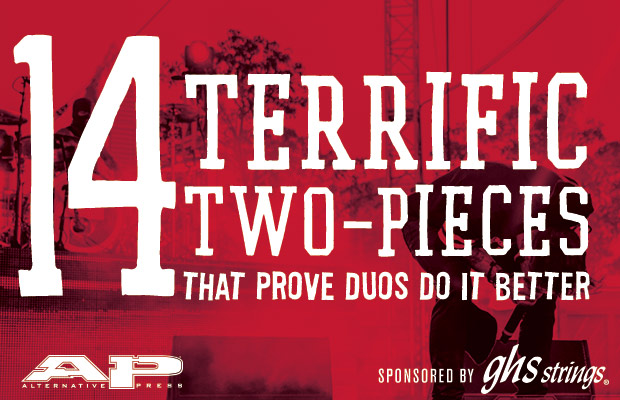 Don’t underestimate the duo. Some two-pieces can be just as formidable—if not more powerful—than a full band. Ever since Meg & Jack White lit the spark in the late ’90s, we’ve had a whole bunch of twosomes come and rock our worlds since then—from acoustic pop to rock to indie to punk. There are plenty more than just the White Stripes and the Black Keys. Some duos have backing live bands, so in this case, we will define duo as a band with two official members/main creative forces. Here are 12 of those pefect pairs:

This delightful duo are exposing the real softies inside grown men everywhere. Their catchy, emotional acoustic pop throws back to high school summer nights with the car windows down and the Starting Line on full blast. Gentlemen, if you haven’t already, make those plans to “take your girlfriend” to see This Wild Life.

When legendary screamer Spencer Chamberlain left Underoath, his next move was highly anticipated. Luckily, he teamed up with multi-instermentalist/production brainchild Stephen Bowman and the two started pumping out electronics-fuled rock jams. They signed to Epitaph Records and released their debut, Broken Compass, over the summer.

In the early ’90s, guitarist Pen Rollings’ (Honor Role, Breadwinner, Butterglove) aesthetic pretty much gave the world the concept of math rock, routinely connecting complex riffs and time signatures for maximum devastation and enlightenment. That kind of development has continued: After a stint forming the amazing tech-metal outfit Loincloth, Rollings moved over to drums and teamed up with guitarist Brian Metz to form Bowl Ethereal, whose debut EP (featuring six, minute-long songs) was released on Southern Lord earlier this year. Rock out with your calculus homework!

Add Davey Havok and Jade Puget to any musical venture and it’s going to turn heads. (See: XTRMST.) But their darkwave electro tracks are a most-enjoyable distraction from all things AFI. They most recently remixed a song, “†elepa†hy, ”from Chino Moreno’s Crosses.

Hailing from the UK, (Brighton, to be exact) bassist/vocalist Mike Kerr and drummer Ben Thatcher have been on the fast track, forming Royal Blood in 2013, signing with Warner Bros. and having their debut album released in late summer. Royal Blood have been able to hit that sweet spot between tough, scrappy underground aesthetic and the kind of vibe that appeals to people who still insist on listening to the radio.

This New Jersey indie-rock band just released their biggest album yet, Talon Of The Hawk, and play sold-out shows like it’s their job (uh, I guess it is their job). Their melancholy melodies are catchy as hell, and they have alligators in their music videos. What more could you ask for?

Give Pomplamoose credit: They may not be the best at touring (okay, they’re terrible at touring) but they were one of the first “YouTube bands” and have some pretty diverse instrumentation. Their cover of Lady Gaga’s “Telephone” has over nine million views, alone. They’re also pretty good at getting the internet to talk about them. (See: any music site with an op-ed section three weeks ago.)

Most bands would call it quits after losing three founding members, but Tigers Jaw reformed as a twosome and released one of their best albums, Charmer, in 2014. Now, if we could just stop men from jumping onstage to try to kiss vocalist/keyboardist Brianna Collins.

Vancouver drums-guitar duo Japandroids blended influences like the Replacements and Bruce Springsteen on their latest album, Celebration Rock, which had a thunderously positive reception in 2012—it was named one of AP’s 10 essential albums. Part classic rock, part punk, their raucous and joyful music is the perfect summer soundtrack.

People were pretty hyped for these Canadian dance-punks’ comeback, and rightfully so: Their first album in 10 years, The Physical World, brought righteous noise, especially the two singles—“Trainwreck 1979” and “Government Trash.”

Not to be confused in the slightest with Jonny Craig’s new outfit (How long until the inevitable country appendage to their name?), guitarist Laurie Vincent and drummer/vocalist Issac Holman hail from Kent, UK, and make the kind of tightly wound racket that would find them self-immolating if they didn’t release the pressure in their brains. Their debut album, 2013’s Sugar Coated Bitter Truth, is frantic and caustic, while songs like “Bad Machine,” “Beauty Quest” and “Hey!” feel like like anarcho-punk avatars Crass bruising the blues.

Tyler Joseph and Josh Dun are the most formidable two-piece out there today. After becoming a massive local band in Columbus, Ohio, they joined Fueled By Ramen, and their career took off. Songs like “Car Radio” and “Holding On To You” tug at the feels as perfect emotional pop. Their live performances—with crowd-surfing drum sets and dangerously high climbing—are second to none.

This article is sponsored by GHS Strings.