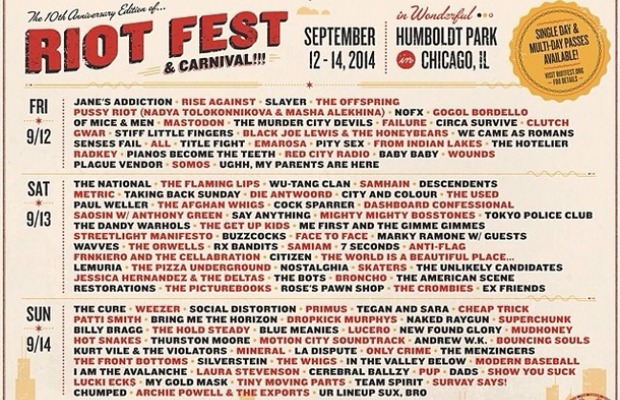 September is finally here, and you know what that means: It’s Riot Fest season! Riot Fest has quickly become the AP staff’s favorite festival of the year, with its insane lineups full of unexpected reunions and legends rubbing shoulders with up-and-comers. All three Riot Fests—Toronto, Chicago and Denver—share some lineup overlap. No matter which one you attend, you’ll have a chance to see the Cure, Taking Back Sunday, Rise Against, Bring Me The Horizon, New Found Glory, City And Colour, Social Distortion and more. But we thought it would be fun to feature some of the acts that are exclusively playing only one Riot Fest, that way you can go see ’em, then rub it into the faces of everyone attending the other Riot Fests that you got something special, maaaan. And aren’t bragging rights what it’s all about?

Get your tickets now!

This isn’t meant to be a snobby remark, but you probably don’t get the Blue Meanies. Don’t feel bad; I’ve been listening to them for nearly 20 years, and I’m not sure I get them. Their psychotic carnival-ska/thrash/hardcore hybrid has literally never been touched by any other band living or dead. What’s crazy is that the Meanies themselves have been more or less dead for a decade-plus, having last reunited for Riot Fest back in 2007, when the festival was significantly smaller scale than it is now—but still, even though they haven’t put out a record in 14 years, the Chicago band is still untouchable and unfuckwithable. Listen to me when say these words: If you are going to Riot Fest and you don’t watch the Blue Meanies, you are a fucking dingus. —Scott Heisel

Rockford, Illinois’ favorite sons (next to me, of course), Cheap Trick are a rock ‘n’ roll institution, and it is a goddamn crime they haven’t even been considered for the Rock And Roll Hall Of Fame. No matter: They’re 30-plus years deep into a mightily impressive career, they’ve written some of the best songs in the history of rock music (if you don’t own their first four LPs, you are seriously blowing it) and they are still a force to be reckoned with live. Not to mention, you won’t see more guitar changes anywhere else in Humboldt Park. —Scott Heisel

Last year in an interview, Chris Carrabba had said “I love Dashboard. I love Further [Seems Forever]. I love my bandmates in those bands, and I don’t have any plans to not do those bands with those guys, but Twin Forks is where my heart is and where my creative reward is coming from right now.” While we wish he was more of a juggler of all three acts, it’s just not his style. Fast forward to last month, when Carrabba started talking about how he plans to “slowly bring DC back.” Excitement: engage. Dashboard has always been in high demand, but in low supply the past few years—so seeing them at Riot Fest Chicago is a scarce opportunity that shouldn’t be slept on. —Brian Kraus

Emarosa have endured a lot throughout the past eight years they’ve spent together as a band. From numerous lineup changes to even a name change (they originally formed under the moniker Corsets Are Cages with current Like Moths To Flames frontman Chris Roetter on lead vocals). Following their most recent fallout with former vocalist Jonny Craig, the band took some time away from the spotlight to focus on their next move. Now, the band have officially returned and are arguably stronger than ever. With former Squid The Whale frontman Bradley Walden at the helm and their brand new comeback album just hitting the shelves, they are essentially a mainstay on any must-see-acts list for this fall. Do yourself a favor and catch the band’s set this Friday—you won’t regret it. —Tyler Sharp

There is a certain essence about the Front Bottoms that just screams fun. Whether it be indulging in their emo-esque brand of indie-folk-whatever at home, or witnessing their genuinely entertaining live performance, you’re sure to be grinning from ear to ear. You may not know of the animated New Jersey-based duo just yet, but after you catch their set on Sunday you’ll most likely be asking yourself why you hadn’t immersed yourself in their hybrid-punk sound earlier. —Tyler Sharp

In celebration of its 10th anniversary, Riot Fest has arranged for 10 bands to play their essential albums in full. So, not only is Chicago the only Riot Fest where emo pioneers the Get Up Kids are performing, but also a rare opportunity to see them play arguably their best album (and certainly fan favorite), Something To Write Home About. The Get Up Kids are criminally under-appreciated in their influence on the pop-punk boom of the late ’90s and early ’00s, and are a must-see for any true fans of the Riot Fest scene. —Philip Obenschain

It has already been six months since the shocking death of GWAR’s longtime frontman Dave Brockie and while some seemed a bit skeptical about future of the band, they are coming back full force. They played their first show since Brockie’s death at last month’s 5th Annual GWAR-B-Q, but Riot Fest Chicago marks their first show back in the festival/touring scene. A new chapter has begun for GWAR as former bassist Michael Bishop is now on vocals. It’s an opportunity almost too good to pass on as the lucky attendees in Chicago will be some of the first to see the new GWAR and it will be worth every damn drop of blood. —Nick Major

Modern Baseball have exploded in the past year (figuratively, of course). After finishing up a headlining summer run with Tiny Moving Parts and the Hotelier and releasing one of the year’s best albums in You’re Gonna Miss It All, these Maryland natives will also be hitting the road for arguably the best pop-punk tour of the fall with the Wonder Years and the Story So Far. Between touring with some of the best bands in the scene and scoring a nod of approval from Soupy Campbell of the Wonder Years in the full-band version of “Living Room Song,” Modern Baseball is a must-see at this year’s Riot Fest Chicago. Just don’t forget your Modern Baseball hoodie. —TJ Horansky

Motion City Soundtrack pretty much perfected the sonic Venn diagram with overlapping driving guitars, great pop hooks, cool synthesizer lines and frontman Justin Pierre’s well-articulated neurosis. They’ve given the scene bona fide anthems (“Everything Is Alright,” “The Future Freaks Me Out”) and their last album, 2012’s Go, proved that maturing as songwriters didn’t automatically designate the band as “lame,” unlike so many other groups who have tried and failed ignorably. Last year’s “Inside Out” makes the proposition of impending new MCS music seem positively life-affirming. I’ve seen MCS play well over 15 times and I can proudly report that they have never phoned it in. And with an event as magnificent as Riot Fest, you can bet they aren’t going to get slack now. —Jason Pettigrew

The thing with many old punk rockers is that the stuff they put their hearts and souls behind simply didn’t hold up with the passage of time. But punk rock should be more than “a phase,” and it should have more meaning as your life progresses. That’s why Chicago punk avatars Naked Raygun have always ruled: Their body of work still holds a resonance that is both historically important and sonically relevant. They pretty much owned the ’80s, riding on a sea of “whoa-oh’s” as frontman Jeff Pezzati and hero guitarist John Haggerty drove things with spirit, panache and a keen sense of self. Their Riot Fest set should succinctly encapsulate everything great about punk, regardless of your age or life experience. Don’t take my word for it, go find copies of Throb Throb and Jettison and all will be revealed…—Jason Pettigrew

Of Mice & Men will be holding down the heavy at this year’s Riot Fest Chicago before heading to Europe with Linkin Park. After their album Restoring Force reached number four on the Billboard charts earlier this year, the real question is: why would you not catch these guys at Humboldt Park this year? Guitarist Phil Manansala also won the first ever Skully for best guitarist at this year’s Alternative Press Music Awards, so grab some friends and plan for some brutal shredding skills during your Riot Fest visit. —TJ Horansky

Two things there will be no shortage of at Riot Fest this year is amazing music and some delicious, greasy food. Those headed out to the Chicago show will be fortunate enough to witness both of those morphed into one thanks to the Pizza Underground. Featuring Macaulay Culkin (yes, the blonde-hair blue-eyed actor from the unforgettable Home Alone films), this New York-based band is stopping through a city known for its pizza where they will be covering some unforgettable songs by the Velvet Underground. Well, kind of. The songs have been reworked and fitted with pizza themes so expect to hear Velvet Underground tracks like “All Tomorrows Parties” pizza-fied into “All Pizza Parties” and many more. Don’t miss your chance to catch a mouth-watering set from a face we all know. —Nick Major

If we made a list of “punk-rock dads that still rock,” Samiam would be a shoe-in. As an exclusive Riot Fest Chicago player, they also belong on this list. The band that wooed this writer with Clumsy have been a steady force in the game during their two decades, with 2011’s Trips (Hopeless Records) having a handful of modernized hits, too. After analyzing their last three record releases like that math scene in Good Will Hunting, we should see another next year. —Brian Kraus

Nobody thought they’d ever see Saosin reunite with Anthony Green. For years—when the band were with Cove Reber—you knew a reunion with Green would never happen. You knew it. But somehow, it has, and you have a chance to see the Translating The Name lineup perform at one of the best music festivals. After this writer expressed his desire for Saosin to become a full-time band again, Green pretty much shut it down. So, go see ’em; it may be your last chance. —Matt Crane

Between their guitar-less new album, rotating live band of scene favorite performers, and impending …Is A Real Boy 10th anniversary tour, there’s never been a more interesting time to catch Say Anything. The Max Bemis-helmed collective are known for their rowdy, high-energy live show, and, now, with half a dozen full-lengths worth of material to pull from, their ability to keep things fresh night after night is unparalleled. To full appreciate their records, they’re a band you must see live. —Philip Obenschain

Silverstein put on one hell of a live show. The band’s post-hardcore fury just translates really well onstage, and they continue to be strangely underrated in the genre. With a deep catalog of seven solid albums, you’re pretty much garneted a good set from the band. If anything, just go so you have the chance to scream like an emo teen, “My! Heart! Bleeds! No more!”—Matt Crane

Though their legacy might be lost on younger Riot Fest goers, New York art punks Television stand shoulder to shoulder with acts like Blondie, the Ramones, and Talking Heads in their influence on new wave, post-punk, and indie rock. Though founding guitarist Richard Lloyd is no longer a part of the group, they recently celebrated their 40th anniversary, and are more active than they’ve been in decades. If, for nothing else, they’re a must-see purely for their unsung impact on musical history. —Philip Obenschain