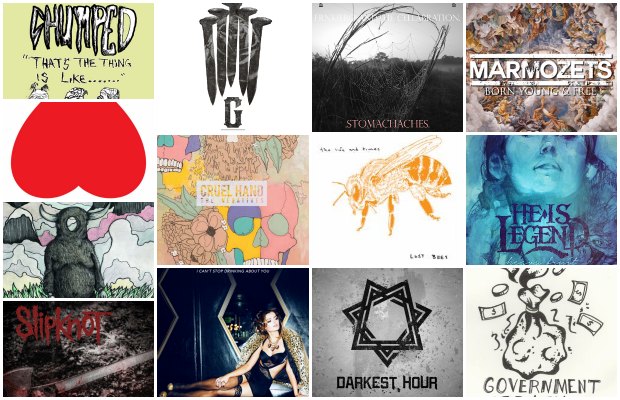 Sometimes the rock world can get noisy, and we don’t just mean in decibels or fuzz. Often the signal-to-noise ratio is more noise than signal. But no worries; we read, listen to and watch everything so we can sort it for you. Here are some of our favorite new songs and videos of August 2014.

CHUMPED – “Hot 97 Summer Jam”
With the unofficial end of summer only five days away, Chumped just made it in before the deadline when they released this seasonally appropriate jam last Wednesday. Despite its title, “Hot 97 Summer Jam” will stick around long after the thermometer has dipped into cooler territory. The song has nothing to do with our prescribed notions of summer (beach bonfires, the smell of sunscreen, hair bleached with chlorine) and everything to do with falling in love and patiently waiting—from Memorial Day until Labor Day—for the other person to notice you. “I'm looking at you/You're looking through me/I would wait for you all summer long,” vocalist Anika Pyle sings in the first verse. Maybe it's just a summer crush, or maybe it will last a bit longer. Either way, the situation seems a bit more hopeful with Chumped backing you up. —Brittany Moseley

While I understand why a lot of people don’t prefer Cruel Hand’s latest single, “Unhinged -Unraveled,” I disagree. Yes, it has a chorus with actual melodies—so what? This is hardcore progressing beyond its current mold; it’s a good thing. The band manage to cram driving, Metallica-like guitar riffs, multiple rhythmic two-steps, an immaculate chorus and a breakdown that is sure to open up any pit, all within two minutes and 23 seconds. Standing stagnant never got anyone anywhere. Don’t talk down on a band who are taking the initiative to step forward and progress. —Tyler Sharp

DARKEST HOUR – “The Misery We Make”

After nearly 20 years of being a band, it’s awesome to see Darkest Hour are not only still together but also putting out some of their best work to date. It’s safe to say the guys are reinventing their melodic death metal sound on their latest self-titled release. “The Misery We Make” has to be one of catchiest tracks the guys have ever released. I welcome change with open arms when done well, and these guys absolutely nailed it. —Nick Major

Last month, we told you had to hear “Trainwreck 1979,” the first single from Death From Above 1979's long-awaited follow-up to their 2004 debut, You're A Woman, I'm A Machine. While we still have to wait a few more weeks to hear their upcoming The Physical World in full, August brought us another taste: “Government Trash.” Unlike its predecessor, “Government Trash” sheds DFA1979's dancier tendencies in favor of grungier production, snarling vocals, nonstop energy and hardcore-laden licks. It feels like a proper return to form for the duo, and gives a better idea of the range we can expect to find on their sophomore release. Despite DFA79 being very publicly lukewarm on their own comeback, “Government Trash” has me feeling cautiously optimistic the band can deliver what fans have spent 10 years hoping for. —Philip Obenschain

It's hard to pick one specific song off Dikembe's new album, Mediumship. The band have gotten a ton of Brand New comparisons (and they're apt, so if you're a fan, check them out), but the album really functions best as an album, interrupted only to flip from the A-side to the B-side. If I had to pick one, though, I'd go with deep cut “Gets Harder,” near the end of the record. It feels like Jesse Lacey trying his damnedest to write a Radiohead song ca. The Bends, and I love it. —Scott Heisel

Frank Iero didn't have a major-label budget to create his debut album Stomachaches. But it doesn't matter, because his songs wouldn't let him. “Smoke Rings” is 139 seconds of insanity, that's all about basement-show punk calisthenics, distortion pedals held together with duct tape, random electronic noise and Iero's unhinged roar that sounds somewhere between a wounded seal on Xanax or a psychopath that's been forcibly woken up from deep rapid-eye-movement sleep. File it in your playlists between United Nations and Rocket From The Crypt's cover of the MC5's “Gold.” Listen up, peeps: Your days got waaay more dangerous. —Jason Pettigrew

The Gaslight Anthem frontman Brian Fallon was dealing with a divorce when writing Get Hurt. It shows across the album and is painfully apparent in the closing track's refrain: “If I thought it would help/I would carve your name into my heart.” For a lyricist with a history of made-up characters and nostalgic name-drops, this blunt emotional force hits extra hard. The man may be broken, but the album is far from it. —Brian Kraus

“Calloused” is the first track to be released from Gideon’s upcoming album of the same name. Fans of the band have been waiting for new material since the group’s 2012 LP, Milestone, and “Calloused” does not disappoint. Right off the bat, the band waste no time getting to the point with a down-tuned verse, leading directly into a pinch-harmonic-infused breakdown that will pump the adrenaline through your veins for you. They continue this formula throughout the remainder of the track, while throwing in a gang-vocal chorus and a slew of other metal influenced hardcore tactics. This is only the beginning; Calloused is not only going to be an extremely crucial album for hardcore, but heavy music as a whole. —Tyler Sharp

HE IS LEGEND – “This Will Never Work”

It's been half a decade since He Is Legend dropped their last album, and I’ve been eagerly awaiting something new from them. I was expecting them to take a heavier route with their latest release, but I was pleasantly surprised when I checked out Heavy Fruit. After about 25 listens through the album, I am still finding myself just as surprised with the fantastic direction the guys have taken. HIL bring forth an album full of diversity that requires several listens in order to fully appreciate it. The energy is high and the grooves are groovy, and one of the tracks that best showcases this is “This Will Never Work.” The song is a perfect example of what to expect on the album, and it will leave you sweating after the uncontrollable dancing that will ensue upon listening to it. Don’t believe me? Take a listen. You’ll be out of breath before you know it. —Nick Major

LET IT HAPPEN – “Burst And Bloom”

Cause + Effect will be a landmark release for Cincinnati’s Let It Happen. You know, the one where they “come into their own” and “mature as a band”? (Hey, it's all true.) “Burst And Bloom” is the latest single off the band's debut album, and it clears the bar set by the first one, “High And Dry.” The pop-rock pacing in the verses and inventive gloomy choruses (“Am I the rotten fruit/Hanging from my family tree?/Did I plan to reap the harvest/Long before I ever sowed the seeds?”) foreshadow an album full of hits—if we ran the world. Even the presentation is cool, with a Cincy lakeside scene shown in the background. Sure as hell beats looking at cover art for three minutes. —Brian Kraus

THE LIFE AND TIMES – “Maserati”

I've been a fan of Allen Epley's post-Shiner band, the Life And Times, pretty much ever since their first full-length, Suburban Hymns, came out in 2005. Their albums are a perfect example of sonic consistency—they release a new one every few years, and it's always packed with spacey rock jams I can zone out and politely head-bob to. So when I played their new album, Lost Bees, for the first time, I didn't even bother looking at the song titles. Then, I got to the fourth track and immediately thought I had somehow accidentally hit “shuffle” in my iTunes. You see, the three-and-a-half-minute instrumental is a driving, proggy jam with propulsive drums, echoed out guitar and some seriously fleet-fingered bass playing that sounds right out of the playbook of Atlanta-based instrumental band Maserati. I command-tabbed my way back into iTunes, ready to call the Life And Times out on some serious plagiarism, when I saw the title of the song: “Maserati.” Clearly, Epley knew what he was doing. —Scott Heisel

At Monday's Primetime Emmys, Julianna Margulies took home the award for Lead Actress In A Drama Series. In her acceptance speech she said, “What a wonderful time for women on television.” The same could be applied to women in music, because there have been some amazing female-fronted bands making great music this year from Chumped and Cayetana to Code Orange and Vales. Add to that list British imports Marmozets. As soon as vocalist Becca MacIntyre belts out the first line of “Born Young & Free” in her soon-to-be-signature raw wail, it's clear Marmozets have a two-part mission: to rock the fuck out and to grab your attention, even if that means cheekily yelling, “We can do whatever we want cause we're born young and free.” Mission accomplished. —Brittany Moseley

It might have taken 26 years for Johnny Marr to release his solo debut (last year's The Messenger) following the Smiths' premature split, but now that he's finally decided to step front and center, the guitar legend seems bent on making up for lost time. With a sophomore LP, Playland, slated to arrive this fall, Marr is back with an upbeat new single. Impossibly catchy and chock full of huge hooks, “Easy Money” is poppier and more dance-ready than anything on The Messenger, a great callback to Marr's off-kilter musical sensibilities that helped hook Smiths fans in the '80s. Channeling themes of greed and the pursuit of wealth in the guise of a mindless pop song, “Easy Money” might just be my favorite solo Marr track yet, reaffirming Playland as one of my most-anticipated albums of the year. —Philip Obenschain

BEBE REXHA – “I Can’t Stop Drinking About You”

You probably haven’t heard much from Bebe Rexha since her split from Pete Wentz’s side project, Black Cards. But she’s doing her solo thing now and is also pissed at some ex-boyfriend. At least, that’s the impression you get from “I Can’t Stop Drinking About You,” her debut single for Warner Bros. Records. The track is a catchy mix of dark pop and melodramatic, synthed-out gloom. But the song’s new video is quite the spectacle, as Rexha throws a shit fit, shooting evil glares, smashing glasses and pouring alcohol everywhere. The song title is clever as hell, too. —Matt Crane

SLIPKNOT – “The Negative One”

“The Negative One” is a nostalgia-filled dart to the jugular of good ol’ Slipknot. While the band may have ventured out with the more experimental Subliminal Verses and the radio-friendly All Hope Is Gone, it’s nice the see them strike back with a throwback rap-metal thrashing that feels like it could’ve been on Iowa. The internet is rumoring pretty hard the track is about ex-drummer Joey Jordison, and lyrics like “You’re the only one to blame” and “You had to be set free” aren’t really helping quell the matter. —Matt Crane