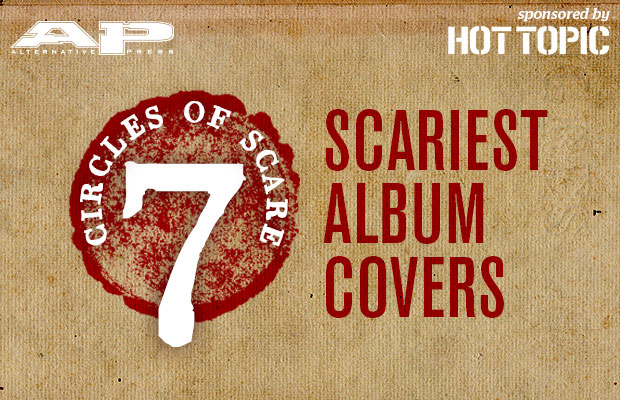 First up, we get gory with artists who’ve made their album covers nightmare-inspiring.

WARNING: Some of these images are NSFW and possibly disturbing.

So, this album cover might not exactly make your skin crawl. In fact, you might be like, “Wow, she looks great,” but therein lies the creepy factor. While Atreyu’s cover model might be beautiful, she is also a hungry undead monster, and you, silly mortal, fell right into her trap. —Cassie Whitt

THE BEATLES – Yesterday And Today

The scariest thing about the the raw meat and decapitated doll scene on the cover of the Beatles' infamous LP Yesterday And Today (often called the “butcher cover”) isn't the photo itself; we've seen plenty of more gruesome and edgy art in modern times. It's the context. In 1966,the Beatles were as much a boy band as they were a rock band, maintaining a mostly clean-cut and radio-friendly image. So, when this cover arrived out of nowhere and with no official explanation, it was especially disturbing and ahead of its time in the shock department (so much so that it was quickly banned). —Philip Obenschain

BRAND NEW – The Devil And God Are Raging Inside Me

Chess pieces? Not very cool. A floating astronaut? Let's be honest: That thing looks pretty dumb. But two adults wearing monster masks (and fuzzy slippers!) hiding around the corner from an unsuspecting four-year-old? Holy fucking shit is that scary, and also the best cover art Brand New have ever affixed their name to (via sticker, at least). This photo has always been a stunning example of the power of a simple photograph, because it leaves so much up to the imagination, and what is freakier than the inside of our brainmeats? —Scott Heisel

THE BRONX – The Bronx

Before the Bronx's debut album came out, there was a near-inescapable buzz about the band, who notoriously got caught in a major-label bidding war before ever playing a show (or something; we're too lazy to factcheck this), eventually signed with Island then were shuttled down to Ferret to make this record, produced by onetime Guns N' Roses axeman Gilby Clarke. But the advance press materials never made any mention that the band miiiight be vampires, as displayed by the cover art to their self-titled debut as well as their preceding EP, Bats!. This artwork always gives me the heebie-jeebies in the best way, as it sums up the Bronx's music perfectly: dangerous, sexy and with just a little bit of blood. —Scott Heisel

You could be forgiven for laughing at the cover of the 2004 release by gore/grind specialists Cattle Decapitation. Sure, Slipknot once sang “People = Shit,” but CatDecap put the whole thing in perspective with this charming rendering of a cow defecating pieces of a human. But that joke isn't funny anymore: If vocalist Travis Ryan's roofing nails-and-molasses vocal prowess doesn't make you want to poop your prolapsed entrails down your pant leg, consider that the first case of ebola has now been documented in our country. Scared shitless yet? —Jason Pettigrew

Thanks to a sticker on the front of Scott Heisel’s desk, I get the absolute delight of being creeped out by this humanoid goat/Satan thing on an almost daily basis. One day, I’m going to sneak in and cover it with a sticker featuring something floral and soft from a Tumblrcore band. —Cassie Whitt

EVERY GRINDCORE BAND EVER
We get it. You like gore.

GWEN STACY – The Life I Know

The now-defunct Indianapolis Christian metal outfit Gwen Stacy came out swinging in 2008 with their debut LP, The Life I Know. Everything from the effort’s pristine breed of metal influenced -core (that still holds up against genre leaders today), to its somewhat controversial artwork, The Like I Know is simply fantastic. Featuring what looks to be a female trapped in a buried coffin, the cover art is not exactly something you would bring to your average youth group gathering. Not only does the art capture essences of both claustrophobia and absolute panic, but sheer terror as well. Can you imagine what it feels like to be buried alive, six feet underground in a space where you essentially can’t move? —Tyler Sharp

HATEBREED – Under The Knife

The cover art to Hatebreed's first 7-inch release is as terrifying as the recordings are unbearable. It immortalizes a monkey being held down with a pin stuck into its hand. A disturbing, but eye-opening approach to raising animal testing awareness within hardcore. —Brian Kraus

Before rising with the nü-metal tides of the late '90s, Korn spent their early years helping lay the foundation of the genre, employing aggressive songwriting with themes of addiction and abuse, and, of course, using shocking imagery to help attract an audience. The cover of their '94 eponymous debut is, perhaps, their creepiest, depicting a young girl on a swing against the shadow of a large man holding some sort of blunt object. How much we read into that is certainly reflective of the state of our world 20 years later, but, nonetheless, it's unsettling in a way that gory or explicitly scary album covers can't touch. —Philip Obenschain

MAYLENE AND THE SONS OF DISASTER – II

Anyone familiar with Maylene And The Sons Of Disaster is also most likely aware of the anecdote behind their name, which is based on the legend of Ma Barker (born Arizona Donnie Barker), her sons and the crimes they committed. MATSOD’s lyrical content and overall theme summarizes that lifestyles of malicious intent will ultimately be met with divine justice. The cover of the band’s sophomore album, aptly titled II, depicts the members of the band’s bodies (portrayed as Barker’s sons) being dragged away after they had ultimately met their demise in a surprise shootout (while the song “The Day Hell Broke Loose At Sicard Hollow” itself is instrumental, the fatal altercation is described along with the track in the album’s lyric booklet). An excerpt from the depiction reads, “For the first time in my life that I could remember, it had come time for us to pay… and that we did. It was like shooting fish in a barrel, and we sure didn’t hear any angels singing.” Barker’s sons may have met their demise that one fateful day at Sicard Hollow, but rest unassured, they’re far from dead. —Tyler Sharp

This is the album that features a post-suicide photo of the band's singer, Dead, taken by guitarist Euronymous when he discovered the body. Euronymous, of course, was later murdered by Varg “Count Grishnackh” Vikernes, aka Burzum. —Ryan J. Downey

I was in sixth grade when I first came across the re-release of Norma Jean’s sophomore album, O’ God, The Aftermath; I was immediately drawn in by its reclusively frightening cover art. What sixth grade boy wouldn’t be intrigued by a man with a tree trunk protruding from his neck, holding his head in his hand? My mother, on the other hand, was beyond hesitant to let her 13-year-old child indulge in what looked to be anything but a positive influence. To some, a first glance at the artwork will pique their attention, while others can be immediately turned off by its hauntingly simplistic, yet seemingly demonic essence. No matter your personal opinion, it’s hard to dispute how this cover seamlessly intertwines with the record’s eerily ground-shattering material. —Tyler Sharp

I remember seeing Norma Jean at Warped during the touring cycle for this album. When they put a blown-up image of this album art onstage, my friend—who was not really into metal—tapped me on the shoulder, pointed to the picture and asked, “Hey, Matt, I have a question for you. What the fuck is that?” He seemed genuinely disturbed. I laughed. I guess the idea of bees making a hive inside a human heart is pretty terrifying, isn’t it? —Matt Crane

Something about this cover has always been truly terrifying. First off, it looks like a burned human face. Secondly, it looks like a burned human face that has been surgically altered. To make it worse, the burned, surgically altered human face has a zipper for a mouth—and it may or may not be giving a crooked smile. The cover is presented in a way, however, that it could just be the zipper pocket of a really old leather jacket. —Matt Crane

Trap Them’s Darker Handcraft album cover illustrated by Justin Bartlett was my first introduction to the band, and with that came a whole extra connotation for their band name. It was as if the eyeless, fanged, rotting face on the cover was whispering that command to legions of monsters in the dark while I slept. Not cool, Trap Them. The expanded version of the cover is pretty unsettling, as well. —Cassie Whitt

This article is sponsored by Hot Topic.