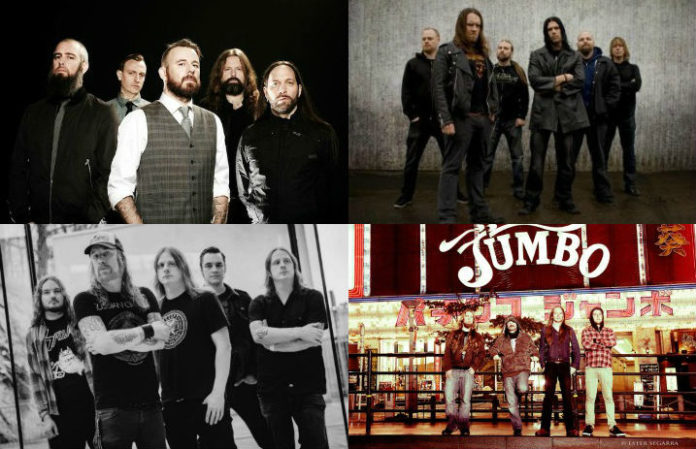 Congratulations (I think)! You've decided to cross over into the heavier realm of metal, where abstract lyrics and violent imagery are discussed as readily as the weather and there are more sub-genres than musicians. In the ever-expanding universe of extreme metal, picking a starting point requires balance between accessibility with accents of crushing heaviness.

So what better introduction to the heavier side than the brand of metal that got me into the genre—melodic death metal!

“Blinded by Fear” by At The Gates

Here’s the artist that started it all.  At The Gates had a hand in inventing the genre with their 1990 masterpiece Slaughter Of The Soul, and “Blinded By Fear” really encapsulates what that album is all about.

“Embody the Invisible” by In Flames

Recently, In Flames have gone a very different direction sonically, but back in 1990s, the band was an institution in the Gothenburg melodic death metal sound.

“Terminus (Where Death Is Most Alive)” by Dark Tranquillity

Rounding out our quartet of founders are Dark Tranquillity, who not only pioneered the genre, but whose vocalist helped get In Flames off the ground!

“Limits To Infinity” by Scar Symmetry

Scar Symmetry have gone through several phases in their career, from classic melodic death metal to an arena rock version of the genre with sci-fi lyrics strewn about. This is the latter.

“The Windswept Mercy” by Soilwork

Soilwork have been consistently pumping out classic melodic death metal jams since their debut album in 1998 and have become an infallible, respected staple within the genre.

“Weather The Storm” by Insomnium

Insomnium are essentially Finland’s continuing lesson in how to pen perfect album after perfect album of apocalyptic and despondent melodic death metal.

Carcass, hailing from the U.K., released three classic grindcore albums between 1988 and 1991 before penning the one-off melodic death metal behemoth Heartwork in 1993.

Enshine are a great example of modern melodic death metal that uses the genre’s keyboard-heavy sound to craft huge atmospheres behind the heaviness.

“Giving Up The Ghost” by Woccon

Not all melodic death metal is from frozen Scandinavia! Woccon bring a wintry, somber edge to the genre rife with pianos from sunny southern Georgia.

Another southern American proprietor of despair, Daylight Dies err on the side of longer compositions with melodies that never cease to mourn.

“Beyond Reality” by Silence Lies Fear

Conjuring the moods of Dark Tranquillity from the Republic of Azerbaijan is Silence Lies Fear, whose brand of melodic death metal feels more like a movie soundtrack.

“Image of Time” by In Vain

In Vain use a lot of neat progressive metal elements, but always seems to revolve around a very melodic death metal core.

Bloodshot Dawn might be a little faster than some bands on this list, but they are unquestionably breathing new life into melodic death metal.

“Wanderer From the Fold” by Solution .45

Solution .45 takes their time between releases, but with two albums out and a third on its way, the band is bound to be a modern classic.