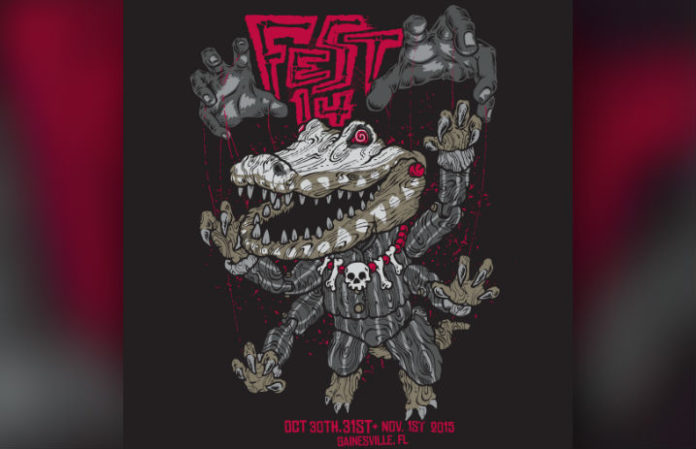 We’re nearing the end of October, and that means it’s almost time for The Fest. Looking over the three-day event’s 300+ band lineup reads like a veritable who’s-who of contemporary punk, almost begging the question of who hasn’t played The Fest at some point in its 14-year history. With so many shows sprawled across numerous venues all over Gainesville, Florida, choosing which bands to go see presents a problem any punk would be happy to have. However, it also means you’ll never see every band you want to, and a lot of talented acts might fly under your radar if you’re not paying attention. Fortunately, we’re here to help narrow down your options (at least a little bit) with these 15 bands, featuring a mix of bands on the cusp of blowing up and others that might slip through the cracks on such an impossibly packed lineup.

If you haven’t gotten onboard with Meat Wave, set some time aside and get yourself acquainted with their SideOneDummy debut, Delusion Moon. Once you’ve taken in the entirety of its noisy rock-‘n’-roll swagger, it’ll be easy to hear why the label wasted little time snatching these guys up and giving them the boost they rightfully deserve. Lo-fi punk has rarely sounded better, and there aren’t duds amongst any of its 13 tracks. Just never mind what the hell a literal meat wave would actually look like. Gross.

6131 Records’ recent explorations into more melodic material has been yielding some excellent finds lately (not that they aren’t still putting out tough as nails hardcore releases too—check out the latest from Blistered for evidence of that). Ireland’s The Winter Passing are one such discovery. Blending distorted bass lines with dueling male/female vocal melodies and riffage reminiscent of early Make Do And Mend, they’ve got a sound tailor-made for a strong debut Fest appearance.

The Spirit Of The Beehive

The way Jade Tree Records rised back from the ashes and quietly made itself a home for many of the top emo, indie, punk and post-hardcore bands around today is nothing short of incredible. Maybe it shouldn’t come as much surprise, then, that they recently added the Spirit Of The Beehive. Their swirling guitars meet dreary vocals, off-kilter hooks and outbursts of noise in a way that recalls fellow Philadelphians Creepoid—and that is in no way a bad thing.

There are only two things you need to know here: That  name and Mikey Erg! will be onstage with these guys at the Fest. Watch and listen if you have further questions.

Heartless Breakers have been steadily pushing their way along ever since guitarist Matt Mascarenas formed the band following Daytrader’s 2012 demise. There’s a lot to like on The Great Give Back, if you’re into air-tight, polished, poppy emo/post-hardcore with enormous choruses. We have a feeling that won’t be a tough sell.

Ever wonder what Diamond Youth would sound like if they just, like, really embraced Nirvana? That thought might give you a lazy man’s idea of what Teen Death are getting up to (we’re also now taking bets on how fast they’re going to get sick of being compared to any number of early 90’s alt-rock bands: see what we did there?) that though, because their self-described, grunge-influenced “bummer punk” sound is as infectious as it is snarky and snarling. You can either get all the way on board with them now, or in two years when they blow up and you’re hearing about them from all your friends.

We’ve got a feeling there won’t be any shortage of rock-solid pop-punk bands in Gainesville this weekend. However, that doesn’t mean Boardroom Heroes aren’t worth giving a fair shake. Released earlier this year, their latest EP New Wage encapsulates all the best parts of ‘90’s skate punk, brought together with enough skill to hook in the most jaded of pop-punk diehards. Recommended if you dig stuff like Arms Aloft or Red City Radio (and if you have even a passing interest in anything Fest-related, we’re going to guess that includes you).

There aren’t many bands on the noisy, extreme end of the metallic hardcore spectrum on this year’s Fest lineup. However, that just makes Cult Leader stand out that much more as a band not to miss. Formed by three-fourths of former Salt Lake City destroyers Gaza, these guys have wasted no time putting that band’s ill-fated demise behind them and coming back stronger, sharper and more full of piss and vinegar than ever. Catch them shred through some jams off their recently released Deathwish Inc. debut, Lightless Walk, and we guarantee you’ll never feel happier to feel so devastated.

Like Joyce Manor? Then you’ll probably like I’m Glad It’s You, too. These fellow Southern Californian punks packed no shortage of power and emotion into their urgent yet all-too-short EP (not to mention a surprisingly solid and wholly unexpected Counting Crows cover), Daydreams. Give it a listen or 10, then get wherever you need to be to hear them rip live. Or be a dummy. Your call.

Oso Oso certainly fit squarely within the emo revival 90s-influenced indie/punk movement we’ve heard no shortage of over the past few years (if that sounds like a complaint, it’s not). Here’s a sense of fun and self-awareness this genre sometimes lacks, and while that’s refreshing by itself, there’s something else intangible that sets this band apart, too. If you’ve ever wished you could get a new Get Up Kids record with some modern pop-punk touches, we think we’ve found what you’re looking for here.

The Color And Sound

The first thing you’re going to hear when you fire up the Color And Sound’s latest EP, hi., is a classic Saturday Night Live sample. What you’re going to hear after that is three tracks of fun power pop that’ll stick in your head for days—along with that persistent ringing in your ears that’s going to follow you home from the Fest.

Freshly signed to No Idea! Records and featuring members from This Bike Is A Pipe Bomb, Future Virgins and more, Basement Benders are almost worth recommending based on their pedigree alone. Fortunately, they earn a listen due to sass and songwriting skill, too. It’s punk. You’re at the Fest. What else do you need to know?

Feeling like getting your intricate post-hardcore on, noodly guitars and atypical time signatures and all? If so, self-described cave recluses Alaska have got what you need to scratch that itch, blending adventurous guitars with sung/spoken vocals that bring bands like La Dispute to mind.

How good are Binary Heart? Good enough for the ever-busy Jeff Rosenstock to slap his name on the production credits of their latest LP, Brighter Days. Given that this New York City-based five-piece features ex-members (vocalist/guitarist Mike Costa and bassist Steve Wozniak) of Rosenstock’s former bands Bomb! The Music Industry and the Arrogant Sons Of Bitches, that connection only makes sense. Brighter Days sounds like a logical progression from the band’s previous records (and previous outfits) with heartfelt yet mature pop-punk melodies.

Beach Slang came out of nowhere and built more buzz on the back of two EPs than just about any punk band in recent memory. Now that they’ve just released their debut full-length, The Things We Do To Find People Who Feel Like Us, the only question left now is just how far much farther they’re going to go. If getting the collective attention of everyone from the underground punk blogosphere to your own print copies of AP (hitting newsstands this weekend!) to NPR is any indication, their potential ceiling looks like it’s way the hell up there. Catch them at the Fest now, so you can say you knew them back when,later.