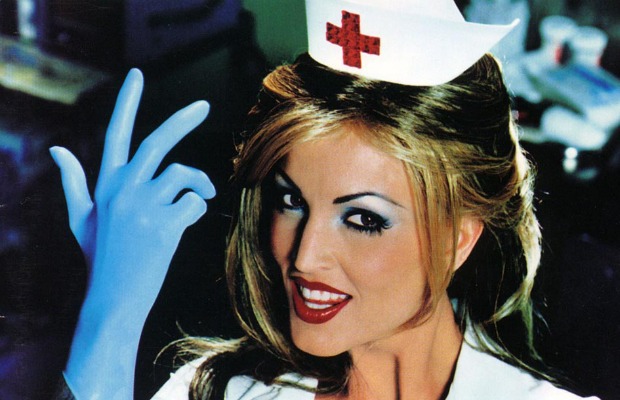 After Blink-182 achieved Gold status with 1997's Dude Ranch, the SoCal trio faced a crossroads: Cut ties with original drummer Scott Raynor and capitalize on their sophomore effort's surprise success or fade into the abyss of one-hit-wonderdom and become yet another footnote in pop-punk's storied and increasingly crowded history. Opting for the former, Mark Hoppus, Tom DeLonge and newbie Travis Barker single-handedly changed the face of mainstream rock when they unleashed 1999's Enema Of The State into the bogged-down musical universe. Gone was super-serious, bro-core heaviness most commonly heard on alt-rock radio, and in its place was a good-natured, slightly perverse lightness that served as the soundtrack to countless teens' journeys through adolescence and angst. “The record changed our lives,” Hoppus proclaimed during a Reddit AMA in 2013, and while he didn't say for sure, it's hard to imagine he was speaking strictly for the band while making such a universally shared assertion.

Here, members of the Maine, the Story So Far, Have Mercy, Mayday Parade, Such Gold, Real Friends, Yellowcard and Neck Deep reflect on the album that would launch pop-punk into the mainstream once and for all.

“I was 11 years old, and I remember thinking, 'Wow, my mom is going to hate this.' And I loved it. I couldn't wait to have my own copy. My cousin bought it for me so I could bypass the parental advisory nonsense. I must have listened to it for a year straight. After a while, it was the only record I even cared about. I listened to it so much. Those songs were so easy to learn on guitar as a kid. They were literally the first batch of songs I was able to learn from start to finish. That was a very important accomplishment for me back then. Looking back, I think it taught me how to structure a song. It taught me the value of a chorus. It will always be the first [album] that really punched me in the mouth and made me feel something awesome. This was the closest we could get to feeling like little punks while living in our suburban neighborhoods. Looking back at the kind of reach it had really is mind-boggling. Any time I discuss what made me want to play music, I usually mention Blink-182. It's been a while since I have been truly into pop-punk music, but in reality, I owe so much to it because without Enema Of The State, who knows what that first meaningful album in my life would have been.”
—Jared Monaco, The Maine

“I think the songwriting and production on Enema was a game-changer for me. I saw Blink-182 in a basement club in Jacksonville, Florida at age 16 when they were touring Cheshire Cat. Then somehow I didn't get into Dude Ranch other than hearing 'Dammit' on the radio. I'm not sure why. But when I heard how massive and epic Enema was for the first time, my mind was blown. It definitely made me want to be a better songwriter and make bigger-sounding records.”
—Ryan Key, Yellowcard

“I remember being at my friend Kyle’s house in sixth or seventh grade, and we would play video games, and he would play records for me from System Of A Down’s Toxicity to New Found Glory’s Sticks And Stones. One day he showed me Enema of the State and it was game over. It was so fucking cool and so refreshing to hear. I fell in love with the album and the band so much, I picked up a bass so I could play along to it. It’s safe to say I might not have started playing in bands if it wasn’t for this album. I really do think that it stands the test of time due to its relevancy across generations. I was able to relate to the confusion, the curiosity, the carefree attitude and light-heartedness when I was younger, and I feel no different about it now. It showed everyone that you can be one of the biggest fucking bands in the world and still act like a complete moron and have the time of your life doing so. Blink showed that you didn’t have to be a hardass rockstar to be in the position they were in. It paved the way for a lot of bands to just go out, have fun and be honest. There’s enough bullshit in the industry, and Blink got everyone to lighten up a little bit.”
—Dan Lambton, Real Friends

“Not only was it my mission to learn every single song on that album, as well as everything else they've put out to date, but because of Blink, I'm a much more well rounded musician. I still play an Orange County drum set because of Travis. I still look at the album as an absolute favorite of mine, but now that I'm older and have a stronger grasp on songwriting and playing, it's cool to listen to it and really take notice to some decisions they made and understand how and why the record takes me on a crazy, awesome journey. It was exactly what the pop-punk scene needed at the time.”
—Doug Court, Sirens And Sailors

“I had this little Fisher-Price radio thing, and I would basically flip between radio stations until 'All The Small Things' came on because at that time, it was my favorite song. It was so catchy. The funny thing was, I was too young because in fourth grade, what are you, like, 7? So, obviously, my parents weren't going to buy me a record that has cleavage on the front and a parental advisory sticker. My friend didn't have any parental guidelines, and he lived right down the street from me, so I'd go down to his house just to listen to the record. I was living vicariously through him. Right when I was picking up the guitar, I was in fourth grade. You could sit there and easily pick out parts in the songs and play along with them. I found a band that I really enjoyed sonically, but I was also able to replicate what they were doing on the guitar, and that really helped me develop my technique. I think it's their most important record. It was definitely the definitive record for them. Being as young as I was, there was no way I could access that kind of music until it was on the radio. They were the biggest band at the time. It was Green Day, Blink-182 and Weezer. This record really put them up there in that echelon. It basically took punk music and, for the first time, really made it a mainstream thing.”
—Kelen Capener, the Story So Far

“I remember definitely enjoying the nasal quality of Tom DeLonge’s voice because my voice is so nasal and I liked it. I had recently gotten into Green Day, so it was along the same lines. It was exciting to listen to stuff that related to each other because it was a new sensation for me. It influenced me to not do anything about the nasal character of my voice—it made me think that that was more acceptable. It opened the door to a whole new crop of punk bands that influenced me.”
—Jon Markson, Such Gold

“I saw the video for 'What's My Age Again?' and I told my mom I had to go out and buy it that day, so she took me to WalMart and I bought it. Ever since I saw them live and saw Tom DeLonge playing a Strat on stage-left, I've always played Fender or Fender-type guitars, and I always stand stage-left. He's one of the most underrated guitar players of all time. I think of [Enema Of The State] and the Get Up Kids record [ Something To Write Home About] that came out around the same time; they were the biggest things that could happen for a genre. I mean, it sold 5 million copies worldwide, so bringing pop-punk to the mainstream was huge. It's tied with Dude Ranch as their best album, in my opinion. Even if it didn't break out into the mainstream, it would still be one of their top albums.”
—Andrew Johnson, Have Mercy

“I remember getting it on CD for Christmas, and I got my very first iPod that year, as well. I spent all day wondering when I could get it onto my iPod so I could listen to it. It was all I listened to for at least a few months. It just blew me away. I was aware of that kind of music a bit, but I would listen to this album and just be like, 'This is the best thing I've ever heard in my life. How is this even possible?' It was just so cool. It probably was one of the most influential albums to me musically. That was one of the records that made me want to play music. It made me say, 'I want to do this. I want to be like these people.' It shaped the way I play music, but it also shaped the way I try to write music as well. The first thing you really get into, the first thing that gets embedded into you, it will shape how you end up writing in the future. The fact that this was one of the first things that I really got into, that's how I ended up doing what I do now. The music I'm most into now is still pop-punk. I love loads of stuff, but that's the one genre that I will never not love. That band was literally the biggest influence on me. I think that whole era and record really defined Blink. Even as they write more mature songs now, that's the era that defined them.”
—Fil Thorpe-Evans, Neck Deep

“I was 13 when that album came out. My brothers and I had a boom-box, and we would listen to songs on the radio and then record the ones we liked onto a cassette tape. 'What's My Age Again?' was a song that we would always listen to on tape, and I didn't even know who it was. When I eventually found out who it was, I bought the album, and I fell in love with it. It was one of the first pop-punk bands that threw me into that world. Before that, I listened to a lot of what was on the radio and a lot of it was that alternative, radio rock. After listening to Blink-182, I started discovering bands like New Found Glory and Saves The Day, and it totally changed my whole direction, musically. I feel like they are the last huge rock band. There hasn't been a band since Blink-182 that has really made the impact they did, and there hasn't been a band that has reached that complete rock-star status the way they did. What's funny is just recently, about two months ago, without even thinking about any of this coming up, I went back and bought Enema Of The State on iTunes and listened to it again to hear these songs that I haven't thought about in a long time, and it really was incredible.”
—Derek Sanders, Mayday Parade

Blink-182's Mark Hoppus will host the first APMAs on July 21. More general admission tickets have been released, so be sure to get yours and vote now at the APMAs page.