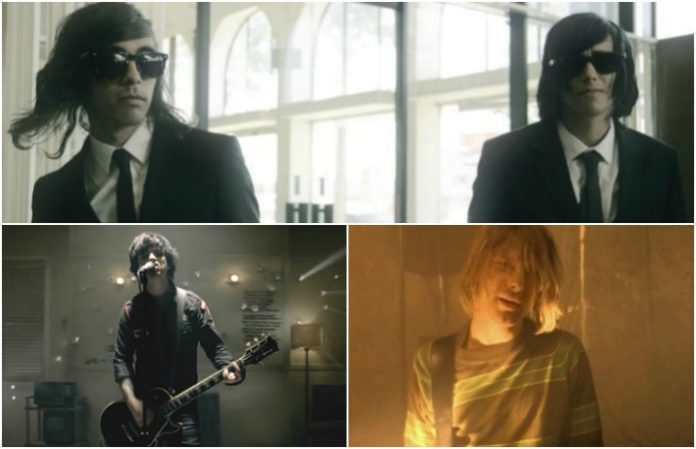 “Starting young” has never been more applicable than when it comes to music. Head below to check out these covers by musicians who might not be old enough to drive yet, but sure are old enough to rock.

Twenty One Pilots – “Ode To Sleep”

Going by Milana Rocks on Facebook, this 9-year-old kills her take on “Ode To Sleep.” According to the page, she has been performing professionally since age 6 and lists Twenty One Pilots, Red Hot Chili Peppers, Slipknot and Weezer as her favorite bands—many of whom she has covered.

Watching this 4-year-old girl play air guitar and headbang is sure to put a smile on your face.

Known simply as Lil Rock Band, this pint-sized four-piece have offered a talented take on everyone from the Red Hot Chili Peppers to Guns N’ Roses to KISS.

These three preteen boys nailed this medley of covers from “Eye Of The Beholder” to “For Whom The Bell Tolls” outside of a Kansas City, Missouri, mall.

Pierce The Veil featuring Kellin Quinn – “King For A Day”

Back in January 2013, Josh and Eli, known as JandE covers, presented us with an impressive take on Pierce The Veil’s “King For A Day.” The duo showed their youthful innocence by censoring themselves (“The thought of you’s not very fun”), but three years later, all bets were off when they returned in June 2016 to please the fans who had reportedly been requesting a reboot.

This epic cover of Slipknot’s “Duality” offers an interpretation of the song itself and the accompanying music video. The kids involved recorded electric guitar and bass, but they also included a pot tapped by a wooden spoon, a toy drum set, a toy glockenspiel and a beer keg tapped by a pink metal baseball bat. The cover is presented by the O’Keefe Music Foundation, who raise funds to allow children to record for free in an effort to educate them about performances and engineering music.

This little boy, who goes by Azry, went viral with his cover of Metallica’s “Nothing Else Matters,” which has since reached more than 4 million views. However, his take on 5 Seconds Of Summer’s “Jet Black Heart” was equally impressive.

Any kid can get behind the sentiment that school’s out forever, but this 10-year-old’s take on the popular Alice Cooper track goes the extra mile with a full face of makeup.

Taj Ralph is a preteen busker who nails covers of everyone from Train to Vance Joy on the Corso in Manly, Australia.

Back in 2009, Nickelodeon’s The Naked Brothers Band starred brothers Nat and Alex Wolff, who have since moved on to bigger things like The Fault In Our Stars and Patriots Day, respectively. Before their more adult roles, however, Alex posted a cover of his favorite band Green Day to their shared channel.

Described as a “happy accident” in the description, this duo offered up an impressive cover of a Foo Fighters track at a festival’s open mic in Ireland.

The Raconteurs – “Steady As She Goes”

Going by WJM, which is each member’s first initial, this group of kids might have ranged between ages 10 and 11 at the time of this cover’s release, but their professional stage presence rivals people twice their age.

Known simply as Callum The Heavy Metal Kid, this 10-year-old impressed the panel of Australia’s Got Talent, which included Ozzy Osbourne’s daughter Kelly. After receiving a standing ovation from her at the time of the performance, she showed her father, who was equally as impressed.

System Of A Down – “Chop Suey”

Totally unfazed and smiling throughout, this 5-year-old girl’s drum cover of System Of A Down’s “Chop Suey” is truly epic.

This 8-year-old acoustic guitarist is joined by his sister and father for a fun take on Nirvana’s iconic track.

This duo consisting of 10-year-old drummer Mathieu and 13-year-old guitarist Thomas hit every note in their super-concentrated cover.

10 memes that are entirely taking over Halloween 2020