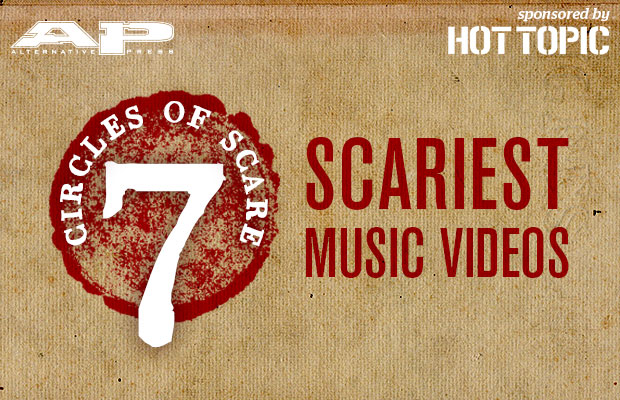 All this month, we’ve celebrated Halloween by bringing you all things gory, haunted, mythical and bloody.  And now we’re rounding out the month with 16 uncomfortable videos to give you fantastic Halloween nightmares.

Ah, if only every month could be Halloween month.

I saw this video once, late at night, on MTV back in 1997 or so. I have not watched it again until right now, for this very article. Yet I still could remember the horrific imagery vividly, as if it were burned inside my brain. Oh wait, it is. Having someone growl, “I want your soul” and “I will eat your soul” for five minutes straight will do that to a teenager. The other thing that will do that to you? Seeing a gang of 8-year-old girls, each of whom’s face is digitally altered to be that of Aphex Twin majordomo Richard D. James, running rampant through a European ghetto, getting in fights, smashing TVs and hassling a little old lady who is just trying to get home. And now, having watched it for this article, I plan on not watching it again for at least another 15 years. —Scott Heisel

Ugh, dolls. And worse: dolls that live in their own world under your floor that you are unknowingly manipulating by guiding them through a sketchy maze that had been concealed by your rug. Even worse than that: Dolls that kill. The most chilling part of this video is provided by the creepy chorus of the song, which correlates with activity in the doll world below. —Cassie Whitt

Though not the scariest music video to come out, Blink-182’s “I Miss You” was a huge step in a darker direction from their typical comedic running around naked/spoof videos. From the creepy mansion to the sphynx and fighting tarantulas, this video has all the makings of a classic horror film, stuff you’d expect to see in an old William Castle [House On Haunted Hill (1959)] piece. Even the band, dressed in vintage suits and suspenders, give off a creepy look and feel as they perform with their pale skin and motionless expressions. Like I said, this video screams classic cinematography, and with lines referencing renowned films like The Nightmare Before Christmas (“We can live like Jack and Sally if we want … We’ll have Halloween on Christmas”), this is the perfect video to watch to get you in the Halloween spirit. Can’t beat the classics. —Nick Major

BOARDS OF CANADA – “Everything You Do Is A Balloon”

Sure, it's exciting to get all worked up watching hapless, oversexed teenagers run from Michael Myers, Jason Voorhees, Freddy Krueger and the rest of the slasher menagerie. There's an even sillier type of fun to be had with B-movies, Hammer Horror films or the Evil Dead trilogy. Want to be a well-informed, cultured cinephile? Have a look at The Cabinet Of Dr. Caligari, Nosferatu, Psycho or the Criterion Collection-approved Eyes Without A Face, a French-Italian art house classic that Billy Idol named a song after. But none of those styles of horror hold a candle to the weird queasy feeling this Boards Of Canada video induces. The footage is all taken from One Got Fat: Bicycle Safety, a bizarre (and now public domain) 15-minute short featuring ape-mask wearing kids getting killed off one by one. They're all on bicycles and they all die because they broke the simple rules of bicycle safety. The 1963 production quality makes it that much creepier; even Don Draper would recoil at this thing's vibe. Boards Of Canada's instrumental tune is super-mellow, which makes it even scarier. —Ryan J. Downey

When it came to fashion, the nü-metal era was basically an excuse to pretend it was Halloween every day. Coal Chamber walked the industrial runway with shaved heads adorned with colored dreads, choker ball necklaces, seemingly unlimited piercings from Claire's Accessories, fishnet shirts and complicated pants

(disregard the shirtless drummer for looking normal). Their video for “Loco” introduced a crazed ice cream man on the loose, forcing his captives to watch this very video. The Chamber even milked the unofficial mascot onto some scary merchandise of his own (left). —Brian Kraus

Impending apocalypse? Check. Dead birds falling from the sky? Check. Prophetic children’s drawings? Check. Aliens? Demons? Demonic aliens? While Karnivool’s video for “We Are” isn’t the most straightforwardly horrifying thing you’ll ever see, it will make leave you uneasy and subconsciously apprehensive—and that’s what can lead to the real terrors. —Tyler Sharp

How much psychotic imagery can you cram into one music video? Just ask Marilyn Manson, who spared no expense at delivering his fans a truly disturbing experience with the video for 1999’s “The Beautiful People.” Bizarre dental work, skull-torture devices, a woman severed from the chest down and dancing creatures that look like Slender Man all make appearances in this filthy video. Still, Manson remains the all-creepy centerpiece—whether he’s dressed like a militant clown on stilts or leaning on his strange crucifix/mic stand contraption. —Matt Crane

Sweden’s extreme-metal innovators Meshuggah created a creepy video to match their sludgy sound with 2008’s “Bleed.” If you hate bugs, this one’s not for you: It’s loaded with close-up shots of cockroaches. It’s hard to say what’s creepier: the Gollum-like creature with half of a face, the giant mummy-Satan that pops out of the wall or the cameo by Lady Gaga. —Matt Crane

MAYLENE AND THE SONS OF DISASTER – “Open Your Eyes”

Maylene And The Sons Of Disaster have stated in the past that their overall theme as a band summarizes the belief that lifestyles of malicious intent will ultimately be met with divine justice. In the music video for “Open Your Eyes,” however, a message of ultimate revenge is quite clear. After executing a plan to free a friend that had been brutally beaten, a trio of girls give a heartless torturer a taste of his own bloody, horrifying medicine by putting an end to his maligned ways once and for all. —Tyler Sharp

“Pink Cigarette” features Mike Patton working the lounge singer croon side of his impossibly diverse vocal range. So what's so scary about a pleasant Mr. Bungle ballad? It's a window into the mind of a stalker! A man in a dress, lipstick smeared over his dumbfounded maniacal grin, follows a random woman around. We see all of the creepy stalker things he does juxtaposed with the romantic delusions playing in his deranged mind. He ends up at her house. Director Tom Kanschat kept the stalker theme going with Knife Party's “Internet Friends,” updating it for the social media (and dubstep) age. Black humor? Sure. Still horrifying? Absolutely. —Ryan J. Downey

Though it was aired heavily edited on MTV due to its controversial nature, Nine Inch Nails' 1994 video for “Closer” (the single which helped propel the band to fame) remains one of the creepiest popular music videos of all time. Some of the more shocking moments include a naked, genital-less woman, a rotating pig head, a beating heart on a table, a monkey suspended from a cross, and NIN frontman Trent Reznor decked out in bondage gear. That imagery, coupled with the song's aggressive “I want to fuck you like an animal” chorus are sure to help it stayed burned into your brain for a long time. —Philip Obenschain

Whether or not the song was inspired by children with cancer (as asserted by Kurt Cobain) or Courtney Love's vagina (as more recently claimed by Love), the video for Nirvana's “Heart-Shaped Box” is undeniably one of the band's creepiest. Directed by Anton Corbijn based on a detailed treatment by Cobain, the award winning video features an old man from a hospital climbing onto a crow-covered cross in a field of poppies; a child in a KKK-esque robe reaching for tree-suspended fetuses; a winged woman in a suit of human organs; references to The Wizard Of Oz and, of course, a trippy performance from Nirvana.  In a videography of memorable spots, this might be the group's most unique, and certainly scariest. —Philip Obenschain

Almost one year ago to the day, Portal released the music video for “Curtain” and even the grimmest of metalheads have been terrified ever since. Brooklyn's Zev Deans is the director responsible for this nightmare, featuring an already horrifyingly dark soundtrack courtesy of the Aussie black/death metal band that made pope outfits evil years before Ghost. The clip for “Curtain” is based on Edgar Allen Poe's death-obsessed poem, The Conqueror Worm, first published in 1843. Remember that video in The Ring? The one people would watch and then get a phone call that said, “Seven days!” and then die a gruesome death a week later? Yeah, this is Edgar Allen Poe plus that. Beware. —Ryan J. Downey

Skinny Puppy are Canada's greatest ambassadors in the realm of dark counterculture, from their harrowing electro-terrorist music to their historically grueling stage presentations. “Worlock” appeared on their 1990 release Rabies, produced by fellow industrial-rock fulcrum Al Jourgensen, founder of Ministry. The video for the song didn't appear much of anywhere, as the clip is a montage of segments from various horror films, portions of which were rumored to be edited from the films' final versions in order to avoid certain revenue-killing MPAA ratings. The shock level here is pretty feckin' high: Not only do you get samples of American cultural psychopath Charles Manson reciting a lyric line or two from the Beatles' “Helter Skelter,” you get more blood and implied human pain than you could ever manage in your most locked-away, murderous fantasies. Keep your eyeballs peeled (not literally, though) at the 2:54 mark where someone gets his spinal column pulled out of his body, head first. After viewing, you may want to table your next meal plans. —Jason Pettigrew

There’s a rusty, grimy theme in many of Tool’s videos. Many of them tell the story of the everyday, but it’s not everyday as we know it. It’s the daily routines of these awful, primordial humanoid things. With stop-motion animation and imagery of decay, any of this band’s videos are sure to give you chills, and most definitely gross you out. —Cassie Whitt

UNKLE – “Rabbit In Your Headlights”

UNKLE began as a collaborative project between DJ Shadow and James Lavelle; their debut album, Psyence Fiction, was loaded with guest appearances, but none were more memorable than that of Radiohead frontman Thom Yorke on the eerie, midnight-hour “Rabbit In Your Headlights.” The video for the clip goes to an entirely new level of discomfort; throughout its five-minute runtime, you see what appears to be a homeless man with some sort of mental illness lurching through one of London’s many high-traffic tunnels and speaking in tongues as he gets clipped by cars left and right. He is knocked down and gets up; he is knocked down again and gets up again; the pattern continues. He ignores everything around him, choosing instead to continue speaking furiously in a language unidentifiable to these ears, then strips off his coat for the finale of the video, which provides one of the most memorable images I’ve ever seen.

NOTE: For whatever reason, the higher-quality version of this video on DJ Shadow’s YouTube channel is not the completed video; it lacks all the special effects of the (sadly) lower-quality Vimeo clip above and sort of “pulls the curtain back,” as it were.  —Scott Heisel