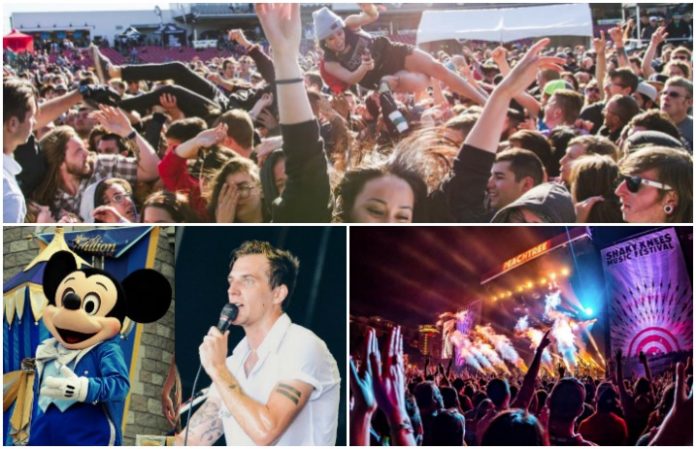 Are you in need of a vacation but having a hard time deciding where to go and what to do? How about traveling to a new city to check out a music festival or your favorite band on tour?

With so many places to go and so many artists to see, the location and music options are epic and overwhelming. Pick your destination, dates, bands and set your Google Flight trackers, because it’s time to plan a music filled vacation—you deserve it.

So What?! Music Festival

‪Christmas is coming up soon! #SOWHATMF10 passes make a great gift! Get yours ASAP! $10 off with code MERRYRICKMAS! Link in bio! ������

South by Southwest? Nah. Skip the panels and film screenings and go to Dallas for So What?! One of the years most epic festivals featuring the best in metal, rock, pop, hip-hop and electronic. With Never Shout Never and Forever The Sickest Kids among the acts playing some of their classic albums front-to-back, you don’t want to miss this.
Where: Grand Prairie, Texas
When: March 24-26, 2017
Acts: The Friday Night Boys, Knuckle Puck, Mayday Parade, Forever The Sickest Kids, Envy On The Coast, We The Kings, Four Year Strong, the Story So Far and more.

The pre-sale is live for #EDGEFEST! Having issues purchasing? Comment below and I’ll send you direct links.

A half hour outside of Dallas is Frisco, Texas, and 97.1 The Eagle’s 25th annual Edgefest. The show falls on April Fool’s Day, but the lineup is no joke.
Where: Frisco, Texas
When: April 1, 2017
Acts: Blink-182, The Offspring, 311, Chevelle, the Toadies, the Naked And Famous and more.

This lineup is already stacked, but you know what would make it even better? The power of Disney. (Magic Carpet Ride with John O not included.)
Where: Lake Buena Vista, Florida
When: April 19, 2017
Acts: The Maine, Beach Weather, the Mowgli’s, Mickey Mouse, Anna & Elsa, etc.

Get some Florida sunshine and beach time in before headbanging to your faves at the Welcome To Rockville fest.

You may not think of North Carolina as the premier vacation destination, but you will after this hard rock weekend.
Where: Charlotte, North Carolina
When: May 5-7, 2017
Acts: Avenged Sevenfold, Soundgarden, Def Leppard, Korn, the Offspring, Papa Roach, Mastodon, Three Days Grace, Coheed And Cambria, Taking Back Sunday, Sum 41, Machine Gun Kelly, Falling In Reverse, Motionless In White, Beartooth, All That Remains, the Pretty Reckless, the Amity Affliction and more.

Okay, let’s be real: Somerset, Wisconsin, is practically Minnesota, but even being that close to the most godforsaken state on the planet doesn’t make it any less awesome.
Where: Somerset, Wisconsin
When: May 13-14, 2017
Acts: Pierce The Veil, Motionless In White, Sum 41, Papa Roach, Every Time I Die, the Pretty Reckless, the Story So Far, Soundgarden.

If you want a vacay to fulfill some cultural, historical and musical requirements, Atlanta has many things to offer. Centennial Olympic Park, World of Coca-Cola, the Georgia Aquarium and the Shaky Knees Fest, of course.
Where: Atlanta, Georgia
When: May 12-14, 2017
Acts: Third Eye Blind, Catfish And The Bottlemen, X Ambassadors, Highly Suspect, FIDLAR, Bleachers, Car Seat Headrest, Modern Baseball, PUP, Pinegrove and more.

While the Sasquatch Music Festival takes place in a remote city, it’s worth venturing North for. The Gorge Amphitheatre is one of the most gorgeous and scenic venues in the world.
Where: George, Washington
When: May 26-28, 2017
Acts: Twenty One Pilots, American Football, Catfish & The Bottlemen, MGMT and more.