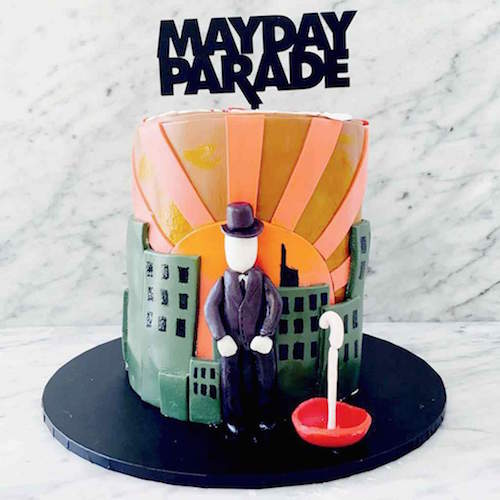 It’s always a nice treat when your loved ones all pitch in to get you a cake on your birthday. But why settle for your average, run-of-the-mill dessert when you could have one themed around your favorite band?

And these cakes don’t just feature them with a simple logo: They’re full-on stories crafted from fondant! Sink your teeth into this delicious list of some of our favorites while getting inspired for your next birthday celebration:

We’re getting older now, but we’ll all play a part in getting you this creative cake themed around MP’s first full-length, A Lesson In Romantics.

Remember Squidgy? Well, now you can have him in cake form and eat it, too! This adorable cake comes complete with the band’s unofficial octopus mascot and their signature ampersand symbol.

You had another birthday, and it could’ve been the worst day you ever had…but your friends got you this awesome cake instead. How thoughtful!

The only thing we’re stressed out about when it comes to this cake is the fact that the chocolate “16” on top isn’t a “21.” But there’s still no doubt that this is one impressive dessert!

Throw on your best party song, and dig into this amazing cake featuring all four members of ATL and the cover art for their sixth album, Future Hearts!

We all knew that Andy Biersack is a snack, but now you can literally eat him up with this over-the-top BVB cake! It’s packed with skulls, images of the band and their logo on top.

PANIC! AT THE DISCO

Your marriage (or birthday) will be saved by this astonishing and intricate P!ATD cake inspired by their debut album, A Fever You Can’t Sweat Out.

This kickass FOB cake is more than we could’ve bargained for. The simple design looks delectable. Can we say “A Little Less Sixteen Candles, A Little More ‘Eat Me?’”

(Courtesy of: Creative Cakes by Angela)

You’ll be screaming “Cumpleaños feliz” once this killer Killers cake rolls out. It started out with a triple-layer base, how did it end up like this? (It was only a cake!)

This elaborate pyramid-shaped 30STM cake is guaranteed to make you feel like the king and/or queen of your birthday bash! Each side represents a different era of the band’s career.

(Courtesy of: Cakes by Erin)

This looks so perfect with its charming illustrations and lyric/doodle decorations scribbled onto the bottom layer. You might be just a little bit older, but that doesn’t mean you can’t rock this cake!

Need we really say more? We’ve all heard the famous “Nobody likes you when you’re 23” lyric before, but it doesn’t matter what age you are: All we know is that we’re feeling this cake!

When you were a young boy, your parents may have gotten an ordinary cake each year. Well, not anymore! Boast your inner emo kid with this black and white edible masterpiece.

You would have to be blind to not notice all the hard work that went into this cake. The fiery orange base complements the lifelike ragdoll from the band’s fourth studio album, Issues.

Admit it: If you’re a Slipknot fan and your parents got you this cake for your birthday when you were growing up, you would’ve screamed until your veins collapsed. Now make a wish, and snuff out those birthday candles!

This eye-popping cake was certainly not made tier by boring tier! It fuses two of the band’s most iconic albums—Riot! and brand new eyes—together, to create a truly unique confection.

The last on our list, this one certainly takes the cake (Thanks, we’ll be here all week!) for the most attention to detail. A fan’s mother made this replica of singer Billie Joe Armstrong’s beloved guitar, Blue, for his birthday!