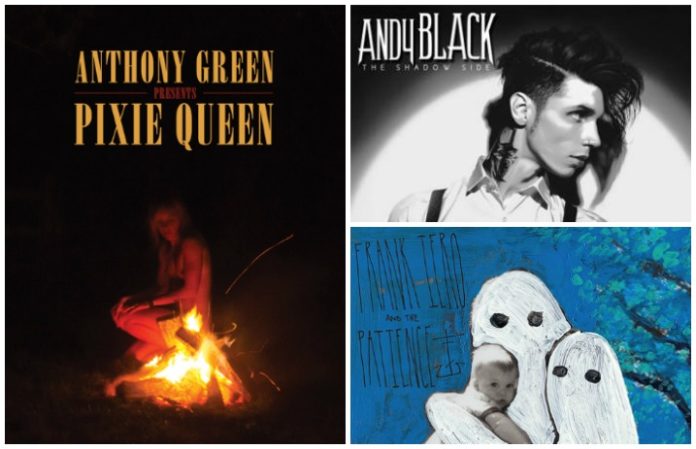 It’s been a great year for music, with no shortage of fantastic releases to fill our headphones. Among those releases are an abundance of solo projects from established acts. Whether they’re moving on after the end of an era or balancing more than one creative outlet, here are just a few of the solo projects you should check out from this year.

Craig Owens may be best known for fronting Chiodos, but he’s definitely no stranger to channeling his creative energy elsewhere. He has had a hand in Cinematic Sunrise, the Sound Of Animals Fighting, Isles & Glaciers and D.R.U.G.S., but this year’s badXchannels is one of his more unique-sounding projects. The electro-pop/R&B blend was announced via social media in late October, and the first single, “l. one car funeral,” dropped a few days later, with Owens telling Billboard that Chiodos is done and this will be his main focus. His debut EP WHYDFML dropped Nov. 18 and features Issues frontman Tyler Carter on a track. Owens is currently out on a handful of dates through December with support from Marina City and Colours.

The Maine frontman John O’Callaghan once ventured into other sonic territory with Eagles In Drag, a project he worked on with guitarist Jared Monaco, Eric Halvorsen of A Rocket To The Moon and Ryan Gose of This Century. The latest outfit in his creative arsenal, however, is a solo effort titled John The Ghost, which he launched in mid-April of this year. O’Callaghan released his Sincerely, John The Ghost EP later the same month, which can be ordered via 8123 with an accompanying book scribed by him.

Aaron Gillespie rose to recognition as the drummer and clean vocalist of Underoath, which he balanced with his side project, the Almost, beginning in 2007. He parted ways with Underoath in 2010 (and later rejoined in 2015), allowing him to shift focus to his eponymous solo endeavor for which he just dropped his fourth full-length, Out Of The Badlands, this past  August. The album features covers of U2 and Bonnie Raitt, as well as fresh takes on Underoath (“A Boy Brushed Red…Living In Black And White,” “Reinventing Your Exit”) and Almost (“No I Don’t,” “Say This Sooner,” “Southern Weather”) songs. There are also plenty of originals, such as the raw standout “You Don’t Love Me Anymore.”

Black Veil Brides frontman Andy Biersack adopted the moniker of Andy Black for a solo endeavor,The Shadow Side, which was issued in May. The John Feldmann-produced album  features an all-star cast of guest collaborations, from Mikey Way on bass and Gerard Way co-writing to 5 Seconds Of Summer’s Ashton Irwin and All Time Low’s Rian Dawson on drums. Biersack will be supporting the release on the final leg of his headline tour—aptly titled The Homecoming Tour: Curtain Call—with support from William Control and Palaye Royale in February and March.

Lacey Sturm stepped down as the frontwoman for Christian rock act Flyleaf in October 2012, leaving her open to work on and release two memoirs—The Reason: How I Discovered A Life Worth Living in 2014 and The Mystery: Finding True Love In A World Of Broken Lovers in October of this year. However, in October 2015, Sturm announced her decision to return to music and embark on a solo career. er first recorded release since Flyleaf’s New Horizons, titled Life Screams came out in Febriary, peaking at No. 74 on the Billboard 200, earning her the title of the first solo female artist to top the Hard Rock Albums Chart, which she snagged the week of March 5.

If you’re missing Man Overboard following the announcement of their hiatus and Farewell For Now Tour in April, then vocalist/guitarist Zac Eisenstein’s Bright Green is right up your alley. His debut, The Highs Are Getting Lower EP, isn’t much different on the back end, with him working with Man Overboard vocalist/bassist Nik Bruzzese and long-time producer Jesse Cannon on the six acoustic tracks. Eisenstein will take his project on the road to support Set Your Goals for a handful of dates celebrating 10 years of Mutiny! in early December and late February.

My Chemical Romance guitarist/backing vocalist Frank Iero has been quite busy since the band announced their breakup in 2013. He released his first post-MCR solo full-length, Stomachaches, as frnkiero andthe cellabration in 2014 and dropped Death Spells’ (his brainchild with James Dewees) long-awaited LP debut, Nothing Above, Nothing Below, this past July. Most recently, however, Iero transformed his solo project into Frank Iero And The Patience and offered the world the punk-fueled Parachutes this past October. Iero planned a U.S. run in support of the album for October and November, but a traffic accident during an Australian tour resulted in injuries to band members, forcing the dates to be cancelled.

While not technically a “solo” project, Two Tongues features Max Bemis and Chris Conley tearing themselves away from Say Anything and Saves The Day, respectively, to offer the world this electric collaboration. Their debut hit shelves in 2009 and was followed up seven years later by Two. The band planned their first headlining tour for this November/December, but it was cancelled about a month out “due to unforeseen circumstances,” with the promise of future shows still to be announced.