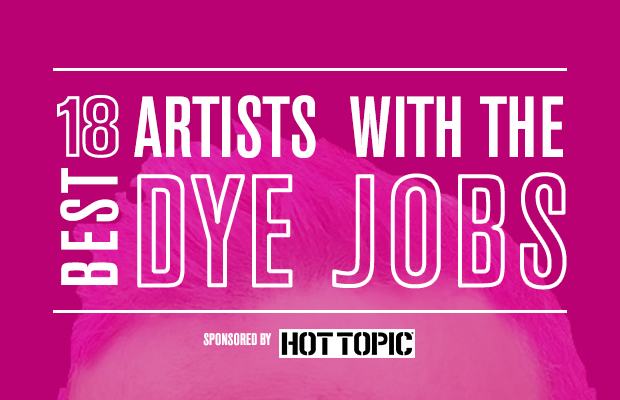 Bright colors and new trends shouldn’t be limited to your summer wardrobe. From bright pinks to simple ombré styles and everything in between, here are just a few of the artists with the best dye jobs in the scene.

Ash Costello has a reputation of loving all things horror, so the split red and black make perfect sense for her style. Plus who wouldn’t want hair that can double as a spot-on Harley Quinn getup?

orange from the inside out pic.twitter.com/eDqZvCys3a

She may have ventured down several other colorful hair paths, but Williams will forever be known for her trademark bright orange no matter the exact shade, length or style.

The only thing that could have made her pink hair any cooler was coordinating it with daughter Lucy. Which she did, and the level of cuteness is almost too much to handle.

Why wear your heart on your sleeve when you can wear your favorite color on your head instead?

While fronting a band named Candy Hearts, it’s practically a given that you’d be sporting some wild, colorful locks. Loveland has dipped her tresses in many parts of the rainbow, but her latest shade of purple is definitely on point.

The subtle lighter tones of Simms’ ends balance out the rest of her wild style.

She hit the stage as an edgy, blonde on ABC’s Rising Star this past summer. A year and a few black streaks later, the 17-year-old songstress is all set to rock out at a few Warped Tour stops.

Sydney’s beachy waves and ombré tresses are perfect for the vocalist of a SoCal pop-rock outfit.

Jeffree Star gives being pretty in pink an upgrade by rocking the hue in more shades than one.

Not much can beat Way’s jet black and red ‘do circa the mid-2000s (a look AP’s own web editor has rocked since ’07!), but his Paprika Power, Hesitant Alien style comes in at a close second.

He may have gone back to self-proclaimed “Barbie Pete,” but the nearly month-long pink endeavor is definitely worth taking note.

When his head isn’t being obscured by the duo’s famous ski masks, Dun can be seen rocking bright tips.

Many of the Hustlers did not approve of Barakat getting rid of his blonde streak, and they had no qualms letting that be known. Luckily, all was well again when he returned to his trademark ’do for Warped 2012.

He has since moved on to a more “natural” brown, but Carter’s experimentation with pastel purple was definitely a successful one.

changed my hair. looks like something blue exploded on my head  pic.twitter.com/nxxtgJUgFN

It would probably be safe to assume that he changes his hair color more than some people change their underwear.

It takes a certain type of person to be able to pull off a bright blonde, and Danziger does so with ease.

This frontman has had more diverse hairstyles than anyone, ranging from a mohawk to short and bleached to his long, luscious ombré . Nowadays, however, Leto has embraced his role as the Joker and kissed those long locks goodbye. For him, it’s easy being green.

This article is presented by our friends at Hot Topic!