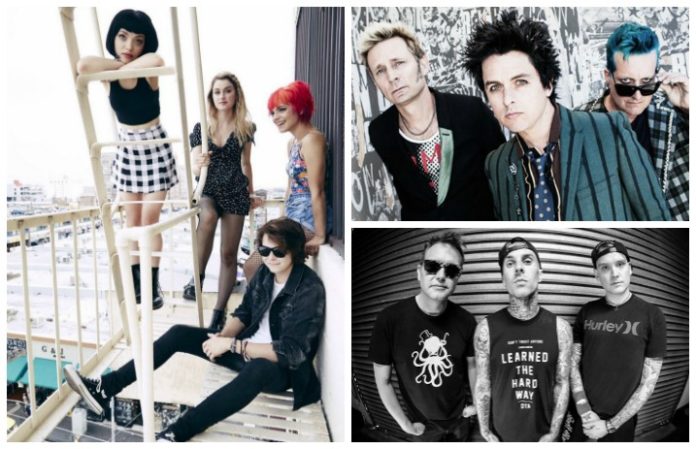 Sometimes, the first try really doesn’t work out when it comes to band names. Plenty of bands have changed their names for a variety of reasons from legal issues and style changes to simply poor choices.

Here are 18 bands who have changed their names at some point in their career, but have maintained their lineup (for the most part):

Stone Temple Pilots were originally named Mighty Joe Young until they realized a blues musician had already claimed the name. Then, they went through a period with the name Shirley Temple’s Pussy before switching to Stone Temple Pilots by the time they signed with Atlantic (which maintained the abbreviation “STP”).

We Are The In Crowd were known as The In Crowd before they ran into some legal troubles in copyrighting the title. They considered a few different options stemming from their original name, before deciding that adding “We Are” to the beginning was the least confusing.

Before they became the alt hip-hop group that made them famous, the Beastie Boys were a punk-rock group called the Young Aborigines. Original member John Berry said in an interview with SPIN that he came up with the name Beastie Boys because he wanted a gang-like name.

The band that amassed the juggalo fandom originally started as a rapping duo named Inner City Posse. Both rappers faced issues with crime and wanted to continue making music without running into problems with the law. They also really wanted to keep the initials “ICP.” So, one day, Violent J and Shaggy 2 Dope put on their creepy clown makeup and Insane Clown Posse were born.

MxPx started as Magnified Plaid, but the band name was apparently too long to fit on posters. Drummer Yuri Ruley abbreviated the name to “M.P.”, except his periods looked like X’s, resulting in MxPx. The name stuck.

Thank goodness Creed changed their name from their original choice. They started under the name Naked Toddler, but changed after just one week—probably after realizing that they might not sell too many albums with the weird moniker.

Chiodos were originally known as Chiodos Bros., named after the horror filmmaker duo, the Chiodo brothers. Those filmmakers are responsible for movie gems like Killer Klowns From Outer Space and Critters. The band removed the “Bros.” later on in their career to streamline the name.

Lamb Of God had a few reasons for changing their name from Burn The Priest: Their lineup adjusted with a new guitar player, and the band had previously been set back by their old name. In an interview, drummer Chris Adler said that people thought Burn The Priest sounded like satanic metal, and the band didn’t want to be pushed into a corner.

In a video on their YouTube channel, the members of Cherri Bomb announced the change to Hey Violet because of “a new chapter” for the band. (Not much of a reason was given as to why they picked Hey Violet, or really why they needed to change at all.)

When they first started out, grunge kings Pearl Jam went by the name Mookie Blaylock, which was inspired by the famous basketball player. Though some think there was a legal battle over the name to prompt them to change it, Pearl Jam revealed that no such problem ever existed with copyright issues. They came up with their iconic name while at a Sonic Youth concert.

PVRIS originally began as a metalcore band with the name Operation Guillotine, but then singer Lynn Gunn was inspired by acts like Paramore and the band took a different (and majorly successful) direction. They had the name Paris based off of a note that Gunn got during school, but they had to change to PVRIS due to copyright issues.

Honestly, thank goodness RHCP changed their name from this original mess. How much alliteration can one band name handle? Tony Flow & the Miraculously Majestic Masters of Mayhem changed their name to Red Hot Chili Peppers after just a couple of weeks.

Although the band had to change their name from Hybrid Theory to Linkin Park because of a Welsh electronic group by the name of Hybrid, they were able to use the name as a title for the debut album. The name Linkin Park is a misspelled reference to Lincoln Park in Santa Monica, California.

New Found Glory quietly dropped the “A” in front of their name, almost like how “Facebook” changed from “The Facebook.” Their first album, Nothing Gold Can Stay, is the only one under their first name with the “A” included.

Blink-182 originally went by the name Duck Tape, but Tom DeLonge renamed the band Blink. The “182” was added after an Irish band named Blink pressured them to change it. In the interview above, bassist Mark Hoppus shares some of the stories the band made up to explain the number, including one approved by Al Pacino.

Green Day went by the name Sweet Children when they first formed, but changed it because they wanted to avoid confusion with another local band called Sweet Baby. The name Green Day was inspired by a song they had written about smoking weed.

Nirvana’s band members were pretty indecisive; they went through a few different name choices before finally settling on Nirvana. And they honored their previous name Pen Cap Chew by using it as a title for one of their songs.