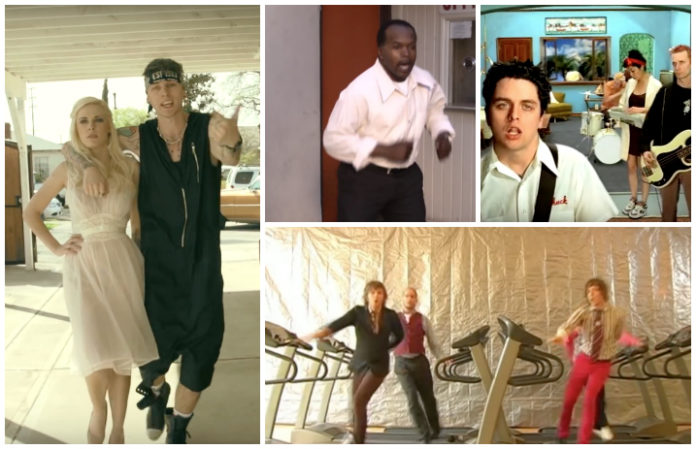 It might seem easy to take advantage of the one-shot approach to a music video, but they’re anything but due to the necessary planning and perfect timing to make sure everything is just right. From a choreographed treadmill routine to an elevator dance party, check out some impressive one-shot clips below.

A continuously panning camera follows Christofer Drew through an appropriately red-adorned park, capturing the essence of the track. Drew revealed the video was shot while on tour in Austin, Texas, and it was relatively easy to film, outside of having to play the song at twice the normal speed to achieve the slow motion effect.

Released as their first single and music video in 1994, “Undone – The Sweater Song” is one continuous motion, focusing on each member rocking out without the assistance of normal cuts. Not wanting anything to do with a sweater, the band embraced director Spike Jonze’s idea of a blue backdrop and a pack of dogs captured with a steadicam.

A majority of OK Go’s videography is done in the one-shot style, making the choice of the most impressive piece in their oeuvre a tough one. While stretching a 4.2 second clip into a four-minute video for “The One Moment” and taking advantage of zero gravity for “Upside Down & Inside Out” are both epic in their own right, “Here It Goes Again” still leads the pack. Because honestly, being able to choreograph a routine jumping around on treadmills (and not wipe out) deserves some kind of medal, which made their Grammy win for Best Music Video in 2007 less than surprising.

Panic! At The Disco – “Girls/Girls/Boys”

Compared to Panic! At The Disco’s other videos, this one is a more simplistic concept. Featuring a super-intimate pan over frontman Brendon Urie in nothing but his birthday suit, it was inspired as a near shot-by-shot homage to D’Angelo’s “Untitled (How Does It Feel)” ca. 2000.

Blink-182 upped the one-shot bar by running three clips simultaneously to follow each member’s pursuit of the same girl. The feat earned David Blackburn Best Editing at the Music Video Production Association Awards in 2005 for his work on the video.

Directed by Mod Sun (who also makes a cameo), this song samples AWOLNATION’s track of the same name. MGK begins by spitting lines from his “Chip Off The Block” in a tee reminiscent of the one worn in that video before the camera switches angles and he begins the one-shot venture with visual lyrical representations cutting in throughout.

Inspired by Zbigniew Rybczyński’s Oscar-winning short film Tango, “Redundant” has the band performing in a vibrant room while a handful of people repeat the same acts for the duration of the video until something breaks that routine.

Linkin Park – “Bleed It Out”

Directed by band member Joe Hahn, Linkin Park puts a twist on the one-shot video, with the band performing in a bar as the surrounding atmosphere plays out in reverse.

Cast as an extra in an originally 40-person production, actor/musician/security guard Derrick T. Tuggle accidently became the only star in the Black Keys video for “Lonely Boy.” After filming with the original cast, the band disliked two different edits, but they did like Tuggle’s one dance scene, so they made it the entire video. Nailing it in one take, Tuggle took inspiration from John Travolta in Saturday Night Fever and Pulp Fiction, Alfonso Ribeiro (Carlton from The Fresh Prince Of Bel-Air) and even Michael Jackson.