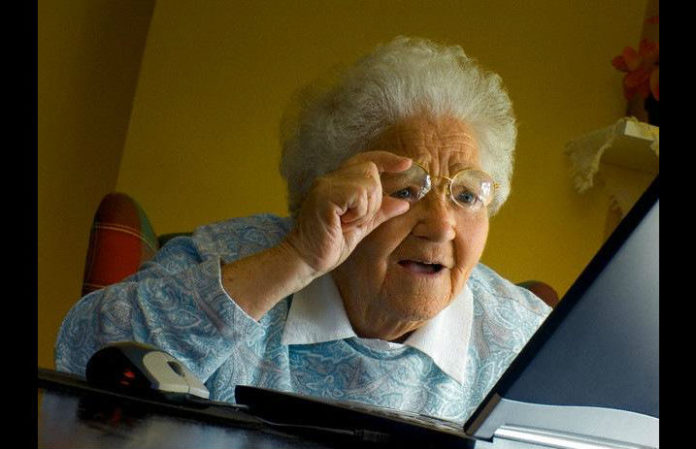 Ever since we were 13, we’ve been proficient in scaring people. From Misfits rings to heavy black eyeliner to, yes, a spiked dog collar, we’ve elicited some pretty horrified and confused reactions over the years. And while our grandmothers would still like to see us as the innocent, little 7-year-olds we once were, our Myspace-era emo identities grew into far more than “just a phase.” So we’ve teamed up to assemble 18 tracks guaranteed to scare the oversized undies off grannies everywhere. What follows are lots of F-bombs. #SorryNotSorry

“Rest In Piss” by Old Wounds

When it comes to scaring people, you’ve got to put your most disgusting foot forward. It all begins with the title. Old Wounds is a great example of a New Jersey hardcore band that just wants to give a giant middle finger to the established order. Their sound is definitely intimidating, and we think that’s a wonderful thing.—TM

Something you don’t want to talk about around your grandma is sex. (Or, as she would probably negatively refer to it, “fornication.”) And if you needed any further convincing, just hear Davey Muise scream, “I’ve made my disgusting bed/a pig in shit/fucked and fed.”—TM

“Immaculate Misconception” by Motionless In White

Obviously, Motionless In White had to make this list. One of the goals with this song is to be as offensive as possible, and boy, do they revel in it. A goth rocker taking on the image of the popular martyr Jesus Christ? Perfect! Show your grandma and you’ll probably get a crucifix thrown at you.—TM

Continuing with the theme, here’s another band that’s really vocal about their qualms with religion. This nü-metal outfit are infiltrating the metalcore scene with some serious anger. If you really want to piss off your God-fearing grandmother, just sing along: “Keep your faith if you want/keep your grace if you want/I’ll just fuck up and fuck up again.” Sweet and to the point.—TM

Another band that aren’t shy about their opinions are Long Island’s Stray From The Path. This one is a direct commentary on the all-too-common sexual crimes that have been surfacing in the music scene. The title speaks for itself.—TM

If there’s one thing that’s sure to scare the older generations, it’s the dangerous ‘R’ word: Revolution. Every youth who’s fucking fed up and seeking change in the world can empathize with this STYG track. But don’t just listen. Get up and do something.—TM

“Age Of Destruction” by the Grindmother

Yes, this is a thing. No, we're not kidding. The Grindmother is a grindcore project created by a 67-year-old vocalist, and she can definitely take you down in the pit. We only hope to be this awesome when we grow up.—TM

“Sunshine” by Sworn In

If there was were band that would have you screaming the words “You just don’t understand my music!” it’s Sworn In—mostly because it’s hard for even kids in their twenties to wrap their minds around these guys. Highly emotional and heavily rooted in chaos and “bleghs!” it takes a few listens to really appreciate Sworn In.—TM

“A Coward’s Disease” by BEA5T

Grindcore is probably the best genre to have represented on this list because it’s just fucking noise—in a good way. Craig Owens's surprise side project BEA5T came out with the EP Empathy Is A Gift earlier this year, and if you want to scare your family, by all means, blast it as loud as you can.—TM

“Violent Pornography” by System Of A Down

While there is next to no lyrical complexity in this track, it's a classic look into the humor System Of A Down so effortlessly had in writing unforgettable songs. Sure, “Violent Pornography” is a kickass track to blast in your 1997 Jeep on your day off, but I definitely never want to share that car ride with my G’ma as Serj Tankian belts “Choking chicks and sodomy/The kinda shit you get on your TV.” It already took me years to convince her to get cable; don't need it revoked anytime soon.—NVD

If I ever told my Tennessee-mountain-born grandma that “I've seen the devil more than I've seen God” the way Bad Omens tells their listeners, I would be excommunicated from her family tree and shipped back to Catholic school faster than you can say “But it's just lyrics in a song!”—NVD

“Thrash Unreal” by Against Me!

“Thrash Unreal” is the anthem of not taking the beaten path, but being okay with excessive drug abuse, multiple regrettable one night stands and constant partying—most likely not the path my grandmother wants me to take in life. As Laura Jane Grace puts it: “No mother ever dreams that her daughter's going to grow up to be a junkie.”—NVD

“The Murderer” by Alesana

Apart from the creepy, yet oddly lulling dynamic between Dennis Lee and Shawn Milke's vocals, letting anyone over the age of 65 listen to a detailed, semi-erotic tale describing the ruthless murder of multiple pub patrons by an unknown thespian is probably a bad idea if Shakespeare isn't behind the authorship.—NVD

“Not The American Average” by Asking Alexandria

“Not The American Average” tells the story of a one night stand in graphic detail that's almost offensive to me. In other words, I'm not explaining why Danny Worsnop screams “Ten inch!” on the song’s bridge at my next family outing.—NVD

“A Little Piece Of Heaven” by Avenged Sevenfold

In classic Edgar Allan Poe meets William Faulkner-style, Avenged Sevenfold created this epic seven-minute short story of a song explaining how a man murderers his lover in a fit of passion, followed by some post-mortem fornication and concluding with a vengeful, demonic death wedding in Hell. As this is arguably one of A7X's best songs to date, it's not one I'm going to ever let my Southern belle grandma hear.—NVD

“Underwater Bimbos From Outer Space” by Every Time I Die

If my grandmother can get past the title, I can already hear the conversation we would have about this track: “No, G-ma, I don't really 'want to be dead with my friends,' it's just a metaphor. Don't call Mom! I swear it's just art! Metal is art, G-ma! No, I don't actually think all of my friends are dead. Gah!”—NVD

“Soul” by the Ongoing Concept

My grandparents asked me once if the music I listened to was comprised of satanic worship. They thought all of the unclean vocals they could hear coming from my room replicated that of demons. I quickly assured them it was not at all like that, then “Soul” ironically appeared as the next song on shuffle. I hummed along consistently to the “I sold my soul to the devil” folk-style chorus.—NVD

“The Darkest Day Of Man” by Whitechapel

This is deathcore. Apart from having lines like “I could easily entice you to kill everything that you love,” Phil Bozeman's deep rooted, primal-like growls would probably be what truly scared the socks off my grandma. When push comes to shove, she still doesn't quite get how you can have vocals without actually singing.—NVD