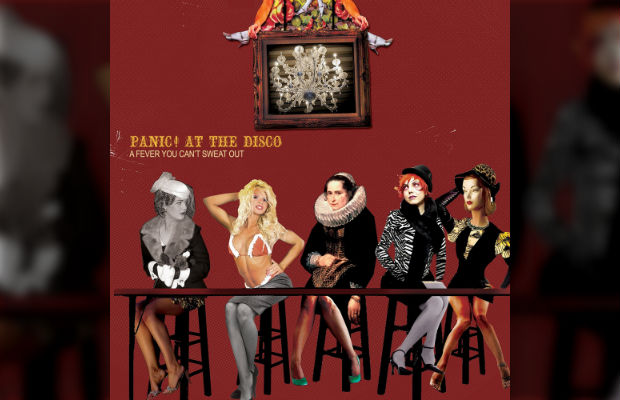 Despite existing only a decade ago, the lifestyle of a music fan in 2005 is leagues away from present day. Back then, we spent hours in front of our televisions watching music videos from this scene actually getting played on television. We’d populate our Myspace interests with hundreds of bands and go to malls where we’d buy their entire CDs for that one song we liked. It was a sweet time when our attention spans were not crumbling under the pressure of today’s endless options. It allowed us time to focus on and really get behind the cream of the crop, which drove our scene into mainstream focus and gave us the means to define a year that remains influential and crucial to listeners today.

Below are 19 albums celebrating their 10th birthdays this year that make us feel super-old.

THE ACADEMY IS… – Almost Here

The Academy Is… caught everyone’s attention with this debut collection of perfect pop-rock delivered with swagger from a different age, which set them apart both sonically and visually from all of their peers. —Cassie Whitt

There is a lot of “what ifs” left with Acceptance. What if the single on Phantoms, a purely pop-rock record, wasn't the ballad? What if they didn't call it quits so early? What if the major label monsters did a better job marketing them? These days, it's more like what if they reunite? With guitarist Christian McAlhaney no longer busy in Anberlin (R.I.P.) and a very caring fanbase who gobbled up the album on vinyl when it was finally pressed in 2013 (the second run is almost gone) still showing support, I like that idea best. —Brian Kraus

THE ALL-AMERICAN REJECTS – Move Along

2005 was peak All-American Rejects: Every Hollister in the nation was blaring “Move Along,” and “Dirty Little Secret” hit the top 40 like a firestorm. It was, perhaps, emo-pop’s brightest moment on the world stage. If an album’s success was measured by how many AIM away messages it spawned, Move Along would have music industry monuments constructed in its honor. —Matt Crane

Alkaline Trio’s Crimson is the album that historically has split the Blood Pact right down the middle. Some purist punks didn’t like the dramatic production, some new fans found the band through its more accessible sound, and some were excited the band had harnessed the dormant darkness under their three-chord punk in a grand way. Whatever your view on the band’s polarizing fifth album, you probably couldn’t escape “Time To Waste” in ’05. —Cassie Whitt

ARMOR FOR SLEEP – What To Do When You Are Dead

Do you remember the golden age of EVR post-hardcore and ARMOR zip-up hoodies? This concept record about killing yourself influenced so many darker emo-rock bands. “Car Underwater” had the soft/loud dynamics on lock, “The Truth About Heaven” had that sliding riff that thrilled to the bone, and the crazy part is you can still remember their respective lines including “I'm in a car underwater with time to kill” and “I came down here to tell you/It rains in heaven all day long” like it was yesterday. What to Do When You Are Dead had a secret hidden track and bonus track that the FBI finally declassified, so have at them. —Brian Kraus

AS I LAY DYING – Shadows Are Security

Have you ever gone to the beach at night and just stared out at the ocean? The sheer vastness of the water really comes alive when it’s painted black and waves are easier to hear than see. Shadows Are Security feels something like that. It plays like a dark fever dream, capturing a heavy mood that crackles with something sinister (not unlike those waves, crashing in the distance). “These thoughts will guide me through the darkest nights” are the reassuring words that seek shades of navy in the blackness. Your trip through the sonic sands of As I Lay Dying’s beach is (literally) moonlit by the album art, somewhere out past the waves, there’s a skull with every intent of stopping you. —Matt Crane

The album that blew Avenged Sevenfold up was also the one that made their fans the angriest. As a high schooler who rode hard for Waking The Fallen—I watched the “Unholy Confessions” video every morning before class, to get “pumped up”—City Of Evil was the last thing I wanted (or expected) this band to release. But it was still fun! “Beast And The Harlot” was so wicked, you almost forgot M. Shadows wasn’t screaming anymore. And “Bat Country” totally got your Motorola Razr taken away in class, because your ringtone—just “Can’t you help me as I’m starting to burn?!” on loop—was “not appreciated” during your Spanish exam. —Matt Crane

Three days ago, Boys Night Out posted a photo of the band's “first gathering of 2015.” We're all about more music from the murderous Canadian screamo act, even if there's no ten-year tour for Trainwreck, which they said in a later posting (but can we trust them?). Progressing to a poppier, psych-ed out direction after Make Yourself Sick, their conceptual sophomore album was like scene LSD. “It's all about the song in my head/The one where the audience is all dead,” sings a possessed Connor Lovat-Fraser on “Composing.” The naturally abrasive frontman cleaned up nice on songs like “Waking” and “Medicating,” another reason why it holds up so well. —Brian Kraus

Guitarist Colin Frangicetto was working towards this heady post-hardcore debut at the end of This Day Forward—it's cake to connect 2003's In Response to Circa Survive's Juturna, musically. The transition wouldn't have been possible without Anthony Green, one of the seven wonders of the scene world, an instrument himself filling dead space on the opening track “Holding Someone’s Hair Back” with a vague stream of consciousness. Most of us were hooked by something that not only pushed the creativity of its members, but our own taste at the time. “Act Appalled” showed us just how high and hard they could go. —Brian Kraus

FALL OUT BOY – From Under The Cork Tree

When you’re a kid, you hear popular classic rock and wonder how those ancient songs got to that point. Like, “Why is this fucking KISS song still popular? Why do I know all the words even though it was released before I was born?” For many of us, From Under The Cork Tree was our chance to witness a classic in the making as “Sugar, We’re Goin Down” caught fire. Ten years on, I still hear that track and “Dance, Dance” on the radio, and I don’t see that changing in the next 10, or even 20, years. Those songs are now at that legendary level where infants are born with them programmed into their minds.  —Cassie Whitt

Gatsbys American Dream had a formula that few bands have dared to emulate. Theatrical pop/emo-rock songs on Volcano called out industry shadiness and disregarded the need for choruses. High-pitch roller Nic Newsham strutted like a displaced frat bro, a classic example of “not looking like his voice.” Their drummer played sideways live. They did it all their way, briefly reuniting in 2011 with a new song and a few shows with Taking Back Sunday in connection with their Bamboozle appearance. Their first three releases are on vinyl, so send some royalties their way, will you? —Brian Kraus

There’s something so tormented about this album, which offers up a softer, more sentimental side of post-hardcore. It’s as if each of the songs, which play like diary entries, would have caused great agony had they not been released. Life In Dreaming remains a perfect go-to album to shout along to when everything feels like it’s caving in. —Cassie Whitt

JACK’S MANNEQUIN – Everything In Transit

It’s crazy to think that Andrew McMahon was undergoing chemotherapy when this album was released. The opening line on Everything In Transit (“She thinks I’m much too thin, she asks me if I’m sick”) is so much more chilling when you realize it was written and recorded before his diagnosis. It’s a true story of perseverance: During the darkest time of his life, McMahon released some of the best music of his career. It’s a rollercoaster of emotions and melody—uplifting at times, desperate at others. It wasn’t a tough transition from Something Corporate, either. (“The Mixed Tape” could easily pass for “sad-SoCo.”) —Matt Crane

PANIC! AT THE DISCO – A Fever You Can’t Sweat Out

When Panic! At The Disco broke out with “I Write Sins Not Tragedies” from A Fever You Can’t Sweat Out, it was an invigorating and confusing moment for our scene. Mixing lounge cabaret with frantic pop-rock wasn’t exactly par for the course at the time. Drama kids rejoiced. Rock kids raised their eyebrows, wondering if “the clown thing” was a gimmick. The entire world, for a moment, became a little more cognizant of whether they had closed “the goddamn door.” —Cassie Whitt

PARAMORE – All We Know Is Falling

Paramore’s breakout album saw us suddenly wishing both our couches and hair were red. Beyond delivering a fresh take on pop-rock that is still fresh and often imitated, the band gave young female music fans a much-needed new inspiration in the form of the then17-year-old, deeply relatable Hayley Williams. —Cassie Whitt

THE RECEIVING END OF SIRENS – Between The Heart And The Synapse

The “songs” on TREOS’ debut can’t even fairly be called that. These are experimental post-hardcore fucking compositions that join forces to weave a complicated story in one of the smartest and underrated albums of 2005.—Cassie Whitt

What a crucial post-hardcore record this was. How many other bands could match the success of When Broken Is Easy Fixed and avoid the sophomore slump? Discovering The Waterfront found the band succeeding on softer avenues. Instead of brutal smashers like “Bleeds No More” and “Smashed Into Pieces” stealing the show, it was a ballad (“My Heroine”) and a rock song with only one breakdown (“Smile In Your Sleep”) that lingered with you long after the album was through. —Matt Crane

THE STARTING LINE – Based On A True Story

Whereas their prior full-length Say It Like You Mean It focused on the content of life’s snapshots, Based On A True Story used the very imagery of photography and cinematography as the lens through which they examined life, creating a cohesive work of mature pop-punk that dealt with coming of age while rising to fame. —Cassie Whitt

Fans of Thrice’s prior work likely never expected the band to get as conceptual as they did with their fourth album Vheissu. With the band teasing “Thrice 2015,” we have our fingers crossed that something related to this album, which opened experimental, creative floodgates for them, will come into play this year. —Cassie Whitt