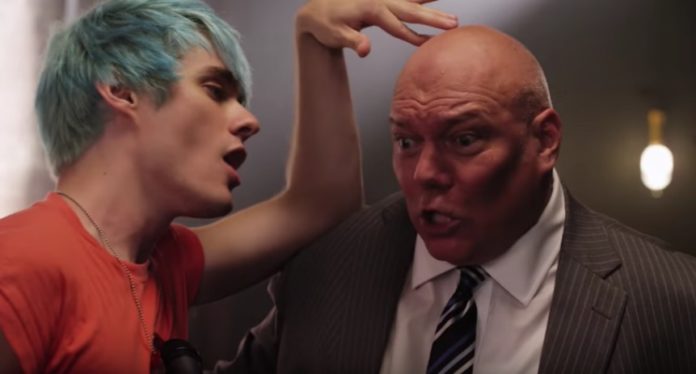 It’s pretty safe to assume that Waterparks frontman Awsten Knight has absolutely no filter for his thoughts, which has lent to some pretty hilarious tweets. Head below to see some of his best work when it comes to calling out all those who have done him wrong.

STEP 1. GET VERIFIED AND BE THE ANNOYING SHITHEAD DJ WHO CONSTANTLY FOLLOWS+ UNFOLLOWS PEOPLE TRYING TO UP YOUR NUMBERS
STEP 2. REMIX!!!!!!

Fuck dude, I get the biggest chubby from blocking shitty verified Internet DJs who follow 800k people and have 50k followers. pic.twitter.com/i6bAbBSjVg

Clearly Awsten has no time for people trying to boost their followers.

@Merck hey I’m going to kick you in the head until your eyes come out and eat them. Thanks for Nexplanon. Fuck you.

This threat is as about as colorful as his hair is blue.

.@arbys @bing I know we have our differences and I talk a lot of shit but I just want you to know that deep down I will never forgive you.

We’d really love to know how this fast food chain and Iinternet search engine crossed him.

4. Girls who dressed as Harley Quinn for Halloween

Let me get this straight..you’re a GIRL…and you’re being HARLEY QUINN for Halloween…..WHAT IN THE WORLD????????

He was clearly so over the abundance of Puddin’ necklaces and Daddy’s Lil Monster tees.

Dove chocolate is so fucking stupid, YOU CAN BARELY EVEN TASTE THE BIRD MEAT

His literal interpretation of a fancy chocolate brand made for an interesting visual.

Being late to a meme is obviously one of the biggest sins of the Iinternet.

7. Orange juice that isn’t from HEB or Whole Foods

Y’all ask me about orange juice a lot. Most tastes like battery acid. These are the only good ones. @HEB @WholeFoods pic.twitter.com/A6UDq3Oke8

He’s certainly not shy about his love of particular brands of orange juice.

ADULTS ALWAYS SAID DON’T MEET STRANGERS FROM THE INTERNET, SUCK IT, I DO LIKE 200 TIMES A DAY. pic.twitter.com/wJ6XNpdI5V

We’re just thankful this didn’t end up looking like an episode of Catfish: The TV Show.

I’d rather die than be Vine famous.

Thankfully he no longer has to worry about this one (R.I.P.).