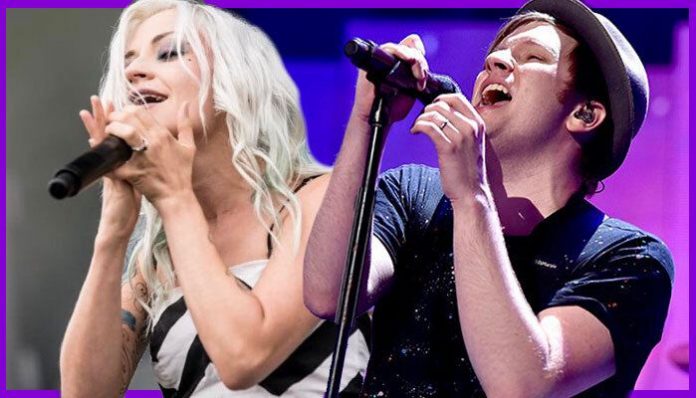 The first decade of this century began in the wake of boy bands and nü metal, so no one truly knew which sounds and bands would break out this time around. Well, “the scene” became a widely used (and misused) phrase, and bands decided to become more egalitarian.

Read below for more on both points, as our list of the top scene vocalists from 2000s covers a plethora. We’re 120% positive that we left some heavy hitters off this list, but it’s difficult to deny that the artists we covered here deserve their spots.

Anthony Green’s Saosin successor Cove Reber gets his own section later, but let’s start this piece off with the band who keep surviving and pummeling this unstable industry with six albums and counting: Circa Survive. This band shouldn’t be huge by any stretch. Circa Survive are quite niche, unconventional and the opposite of accessible. But Green is a fucking star, and his angelic voice is his calling card. He quit his old band Saosin before they signed with one of the biggest conglomerates in the world to start a band with his friends from home for a much smaller label. The gamble paid off, and no one acted appalled.

Brendon Urie (Panic! At The Disco)

Panic! At The Disco organically grew from being the annoyingly overachieving and rambunctious standout kid brother prodigy opener on various punk-rock tours featuring the likes of the Receiving End Of Sirens, Acceptance, Cartel and Boys Night Out into the grandiose, headlining orchestral pop force that they are today. A transition like this would have been impossible without theatrical (by definition) vocalist Brendon Urie at the band’s helm. Few other bands have singers that make just as much sense on Broadway as they do on Fueled By Ramen compilation playlists. In fact, some argue that he makes even more sense on Broadway, but Urie and Panic! hit the ground running with their theater roots loud and proud on their 2005 debut album, A Fever You Can’t Sweat Out. Here’s to another 15 years of scene (and global) domination.

In a story almost too similar to the underrated 2001 Mark Wahlberg and Jennifer Aniston film Rock Star, Saosin fan Cove Reber replaced the imitable aforementioned Green as vocalist for the band only a year before they signed to Capitol Records. Admittedly, Reber had huge shoes to fill, as evidenced by Green’s newer band Circa Survive’s cult-like popularity afterward. But fill them he did, as their 2006 album debuted at No. 22 on the Billboard 200. Reber’s rich high vocals were certainly extremely attributable to the band’s success.

Read more: Here are the 20 greatest guitar riffs from the 2000s

Sometimes bands on smaller stages outdid main stage acts on Warped Tour. This could certainly be said about Chiodos’ brief run on the Smartpunk Stage in 2006. By the following year, the band were one of the most popular acts on the main stage, rightfully earning their spot with blood and sweat, and Craig Owens was the Godfather of the scene, despite having only released two full-lengths. Owens’ high tenor and growl certainly inspired many of the Rise-core bands set to blow up the following decade. There was no hardcore dancing in the living room, but there was certainly such in various fields across our nation.

If you’re reading: Hustling can work. Mayday Parade canvassed outside of 2006’s Warped Tour and sold 10,000 copies of their debut EP, Tales Told By Dead Friends, to strangers, who then became lifelong fans. The next summer, the band played some dates on the tour, and one year later, they were on the full run. It’s a true rags-to-riches story, and the back-and-forth melodic banter of co-lead vocalists Derek Sanders and Jason Lancaster on said EP (and the band’s follow-up full-length, A Lesson In Romantics) took the alternative world hostage. It was such a storm that the band, despite the fact that they’ve released five quality albums since, will never stop getting questions about Lancaster, who left the band just after Romantics was finished.

Try your hardest to “properly” categorize this genre-bending band… You just can’t! Thrice are on a stage and festival of their own. The band are 10 albums into their 20-plus year career, and singer/guitarist Dustin Kensrue’s literate multifaceted and emotional vocals add a weight unrivaled. To put it bluntly, Thrice are capable of playing heavy music more brutal and technical than most of their peers in the hardcore scene, and the four-piece proved such with their earlier records that coincided with the rise of screamo. But the band perfectly played the long game, avoided being boxed into purely one lane and earned their Radiohead evolution comparisons by proving that they could also effectively write more hauntingly melodic, somber music than your favorite band on Coachella on subsequent releases. Folks, Kensrue can both scream and sing with the best of ’em.

Read more: 18 hardcore and metalcore bands you probably forgot from the 2000s

It’s tough to record one album that causes an effect and inspires a movement, but Thursday created four between 2000 and 2009. It’s a shame that the band only made one more record during the next decade before hanging their hats. There’s a hole in the world. Thankfully, we will always have Thursday’s loud legacy, and we will sometimes have sporadic show announcements. Geoff Rickly can easily be accredited as one of the leaders of the post-hardcore/screamo movement that truly took flight at the turn of this century. His vulnerable and verbose lyrics were a centerpiece of this time and place, and he truly assisted in putting the state of New Jersey on the alternative music map.

Sometimes bands need to keep touring to get bigger. My Chemical Romance proved that the opposite could also be true after they ended their hiatus last year. To everyone’s surprise except the band’s ardent and obsessive fanbase, MCR sold out every single date of their upcoming North American tour in less than six hours. The band never had that kind of draw during their original reign, but absence made millions of hearts grow fonder. Gerard Way isn’t just a frontman or singer; he’s a fucking icon. Every single move he makes, word he says, phrase he utters and creation he draws gets some form of major underground press coverage. Way’s vocals are the perfect complement to My Chemical Romance’s aggressive blend of punk, hardcore, metal and rock, and it’s hard to imagine this century’s alternative music scene without humming along to one of his band’s many popular tracks.

The archaic term “female-fronted” should have an asterisk that says “by a woman who is not named Hayley Williams,” as she’s in an elite class of her own that kills those two sexes dead. Williams’ rich, powerful voice managed to stand out from the pack of heavy acts such as Killswitch Engage and A Static Lullaby at the inaugural Taste Of Chaos tour in 2005, and for the past 15 years, as her band have gotten bigger and bigger, she’s been synonymous with undisputable pristine vocal talent across the globe. Paramore have made five completely different yet extremely successful full-lengths in the rock world, and Williams’ indie-leaning debut solo LP, Petals For Armor, is already breaking records. Regardless of your feelings on her new material or when Paramore will return, you will be listening.

Read more: 19 scene albums from 2005 you probably still have on repeat

Like a punk-rock Rivers Cuomo, singer/guitarist Justin Pierre of Motion City Soundtrack has been belting quirky chaotic tunes that appeal to both Weezer super-fans and Punk–O-Rama compilation owners since 1997. MCS are a lyrically driven band who manage to reference the goofiest shit without leaning into comical “Weird Al” territory. But clever lyrics alone don’t earn you a spot on this list, and Pierre’s vocal prowess often gets drowned out by the band’s catchy keyboard sounds. Just know this: Pierre can sing and sing well. Listen to “It Had To Be You” if you have any doubts.

Kenny Vasoli was just 14 years old when he joined the Starting Line in 1999 and in high school when they signed to revered pop-punk/screamo label Drive-Thru Records. That’s quite a feat in itself. What were you doing at 14? The label was a large staple for alternative-leaning youth in the early 2000s, and crazily, Vasoli was younger than a large number of his band’s fans. Once the kids heard him sing, his youth didn’t matter anymore, as the bassist/vocalist had the perfect combination of grit and vocal proficiency to adequately sell every single lyric like a grown-ass man. While many former scene kids still currently attempt to do “The Best Of Me” on a daily basis at a karaoke bar, no one can sing the track like Mr. Vasoli..

Although she left the band for new horizons (get it?) after the band’s third LP, Lacey Sturm fronted Flyleaf to platinum sales from seemingly out of nowhere. Five seconds into the band’s self-titled debut LP, Sturm showcased her sweet and demure side on “I’m So Sick” with pristine clean vocals over a distorted bass guitar that was just low enough in the mix for her soft voice to pop. Thirteen seconds later, she proved that she wasn’t playing around in any way, shape or form, and that she could scream as effectively as her male counterparts. And scream she did, all over the record. Active rock and Christian radio would never be the same. Perfect.

Read more: 10 neon-pop bands who need to make a comeback

Nobody puts baby in the corner, and Patrick Stump is certainly the scene’s baby. Stump’s soulful R&B-tinged vocals helped bring pop punk to TRL, make Fueled By Ramen and Decaydance Records household names, literally break Warped Tour stages and move units in an unexpected and unprecedented fashion. Fall Out Boy broke out of the underground in a more than solid fashion with 2005’s From Under The Cork Tree and continued to evolve with each subsequent release (while exponentially expanding their fanbase). Plus, every day feels like a Saturday when you’re listening to Stump croon.

The 2000s brought about the rise of the dual frontmen, usually in the screamo/post-hardcore worlds, and few bands excelled at utilizing two different lead singers half as well as Underoath. Spencer Chamberlain joined the band for their fourth (and breakout) album, They’re Only Chasing Safety: He had large shoes to fill in the form of former co-frontman Dallas Taylor, who was asked to leave and formed Maylene And The Sons Of Disaster. Chamberlain’s screams are more melodic and diverse than a majority of his contemporaries, and lately he’s been utilizing his post-Sleepwave singing to Underoath’s advantage as well. Hard-hitting drum legend Aaron Gillespie complements Chamberlain with clean and pure vocals that definitely left a major mark on the mid-’00s. When Gillespie left the band, something was melodically missing from 2010’s Ø (Disambiguation), and Underoath began a two-year hiatus. Thankfully, both vocalists are together again, and they now can add Grammy-nominated to the band’s illustrious resume. The changing of times, indeed.

Before the man named after a city in Texas searched for more colours elsewhere, Canada’s finest post-hardcore band Alexisonfire were making quite the wave in North America and beyond. Dallas Green’s hypnotically beautiful vocals (and solid rhythm guitar playing) acted as an extreme contrast to Wade MacNeil’s brutal screams (and intricate guitar leads). Just days after the band broke up, MacNeil announced he was officially replacing Frank Carter as the vocalist for the heavy-as-fuck Gallows, and Green started a mellow-as-fuck project called City And Colour.