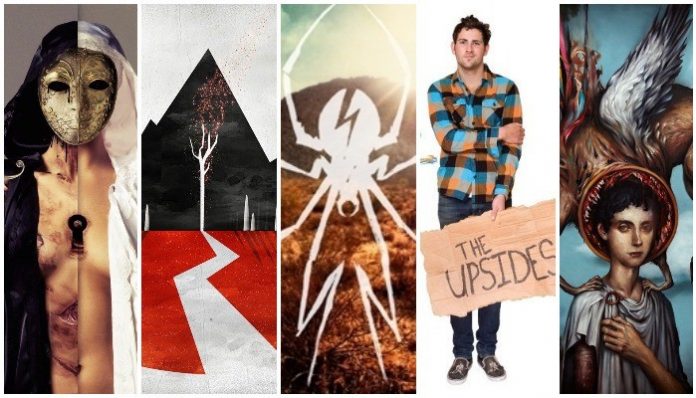 With the decade coming to an end, it’s hard to believe that 2010 was already 10 years ago. From post-hardcore to pop punk, the scene did not disappoint.

We saw major releases (and some temporary final releases) from My Chemical Romance, A Day To Remember, Circa Survive and Underoath, just to name a few.

Here are 20 albums we just couldn’t stop spinning a decade ago.

1. A Day To Remember – What Separates Me From You

Florida favorites A Day To Remember delivered their follow-up to their breakout record Homesick with the perfect balance of pop punk and post-hardcore, making their fourth full-length completely unforgettable.

This Addiction marked the punk-rock trio’s seventh album, which hears Alkaline Trio going back to their sound that we all fell in love with, recalling albums such as Goddamnit and From Here To Infirmary.

3. The Wonder Years – The Upsides

The Upsides was the second album released by pop-punk darlings the Wonder Years. It was part of a trilogy that vocalist Dan “Soupy” Campbell wrote along with their third album, Suburbia I’ve Given You All And Now I’m Nothing, and their fourth album, The Greatest Generation. Following the release of The Upsides, the Wonder Years signed to Hopeless Records, who reissued the album along with four new songs.

We Stitch These Wounds was the debut album from the glam-metal band Black Veil Brides. The album debuted at No. 36 on the Billboard 200 and No. 1 on the Billboard Independent chart. It was released on StandBy Records and was the only BVB album to feature drummer Sandra Alvarenga.

This was the third album from Bring Me The Horizon, as well as the follow-up album to their breakout record Suicide Season. It received fantastic critical review due to its amazing lyricism and experimental sound.

Illuminaudio was the first and only release Chiodos did with vocalist Brandon Bolmer (Yesterdays Rising) following Craig Owens’ departure before he rejoined in 2012. It was also the only album featuring drummer Tanner Wayne. Illuminaudio has the classic Chiodos sound with a heavier twist, but it’s sorely missing Owens’ signature vocals.

Blue Sky Noise was the third album from Circa Survive as well as the follow-up to their beloved album On Letting Go. Blue Sky Noise hears signature Anthony Green vocals dancing in a sound that’s reminiscent to early Saosin.

8. Coheed And Cambria – Year Of The Black Rainbow

Year Of The Black Rainbow was Coheed And Cambria’s fifth album, and it peaked at No. 5 on the Billboard 200. The album is a prequel to the band’s previous four concept records. The deluxe version was accompanied by a novel of the same name written by lead singer Claudio Sanchez and ghostwriter Peter David.

Pop-punk legends Four Year Strong introduced their third full-length album, Enemy Of The World, in 2010. It was their final album with keyboardist Josh Lyford, and it debuted at No. 6 on the Billboard 200.

10. From First to Last – Throne To The Wolves

The fourth album by post-hardcore band From First To Last was their only record without guitarist and backup singer Travis Richter. It served as their last record before their hiatus that began in 2010 and ran until their reunion in 2013.

Invented was the seventh album by alternative-rock favorites Jimmy Eat World. It was co-produced by the band themselves and Mark Trombino, who has worked on multiple Jimmy Eat World albums, including fan-favorite Bleed American. Lead vocalist Jim Adkins echoes the classic Jimmy Eat World sound that we fell in love with all those years ago.

My Dinosaur Life, the fourth album by Motion City Soundtrack, was produced by Mark Hoppus and their first major-label release through Columbia Records. Peaking at No. 15 on the Billboard 200, it features classic pop-punk themes with the ache of growing older and the cycle of emotions that relationships bring.

Creatures was the debut album from the metalcore band Motionless In White and was their only full-length with bassist TJ Bell (Escape The Fate). The title came from the name their fans were called, as the entire album was dedicated to their fanbase. It was produced by Andrew Wade (A Day To Remember, the Word Alive) and reached No. 175 on the Billboard 200 but debuted as No. 6 on the Heatseekers chart.

14. My Chemical Romance – Danger Days: The True Lives Of The Fabulous Killjoys

Danger Days was My Chemical Romance’s follow-up to 2006’s The Black Parade, acting as yet another brilliant concept record. This one was based on the lives of the Killjoys, a group of rebels living in a post-apocalyptic California in the year 2019. Danger Days was the emo kings’ final studio album before their hiatus in 2013.

Harmony was the second album from folk/indie-rock group Never Shout Never. It was the follow up to their debut album, What Is Love?, and was produced by Butch Vig (Nirvana, Green Day). The album came with flower seeds for the customer to plant, while the limited-edition version included a flower pot. Christofer Drew’s vocals over an acoustic guitar gave the familiar sound Never Shout Never were famous for.

16. Sleeping With Sirens – With Ears To See And Eyes To Hear

With Ears To See And Eyes To Hear was the debut album from post-hardcore favorites Sleeping With Sirens. It was the only record featuring guitarists Nick Trombino and Brandon McMaster. It debuted at No. 4 on Billboard’s Heatseekers chart, providing the world a piece of what Sleeping With Sirens were capable of.

The Constant, the fourth album by Story Of The Year, came out through Epitaph Records and was the last studio record to feature bassist Adam Russell. It debuted at No. 42 on the Billboard 200, giving people a taste of their pop-punk sound.

Underoath’s seventh album, Ø (Disambiguation), as their first and only release without clean vocalist/drummer Aaron Gillespie and the band’s last album before their initial breakup in 2013. Ø (Disambiguation) heard Spencer Chamberlain take on both screaming and singing duties, and the record dabbled in darker lyrics than their past efforts.

Weezer’s eighth record, Hurley,  was released through Epitaph Records and debuted at No. 6 on the Billboard 200. Deciding to avoid a fourth self-titled album, the title comes from actor Jorge Garcia’s character Hugo “Hurley” Reyes on the hit television show Lost. The band opted not to put a name on the cover to bring more attention to Garcia’s face.

What was your favorite album in 2010? Let us know in the comments below!