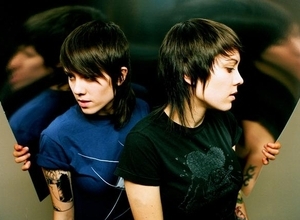 Sure, we get our albums a little before they come out and it's not completely that odd to find yourself walking Jack Barakat to the restroom, but everyone at the AP Skyscraper is a fan of the same sorts of stuff you are. So now that we're a few days into a new year, we figured it was time to just be up front with 2010 now and tell it what we're expecting from it. We pulled our editors from the blustery bliss of their holiday break and had each tell us about five things they can't wait for in 2010. Starting with…

1. A NEW MINUS THE BEAR ALBUM — Sure, their Acoustics EP was enjoyable and their Into The Mirror 7-inch was a jam, but Minus The Bear haven't delivered a proper follow-up to 2007's brilliant Planet Of Ice yet, and I can't wait any longer–especially knowing it's already done. Dudes! Send me it! Please! (Photo: Ryan Russell)

2. THE RETURN OF LOST — Just what did that white screen signify? How much of Lost's universe will be rebooted by the season premiere? Most importantly, will we ever find out what happened to Rose and Bernard? (I can hear Tim Karan groaning already…)

3. WARPED TOUR — Say what you will about Kevin Lyman's traveling punk-rock circus, but I've been an attendee every year since 1997, and this summer's lineup is already so solid that I'm guaranteed to be back. Fake Problems? The Dillinger Escape Plan? The Swellers? Polar Bear Club? Alkaline Trio? Ace Enders? Every Time I Die? Set Your Goals? Andrew fuggin' W.K.? I am so there!

4. SOME HOT, NEW SOCIAL NETWORK I'LL BE FORCED TO PARTICIPATE IN — Oh, wait, there's already Formspring.me. I guess I should sign up for that soon, right?

5. BLINK-182'S NEXT MOVE — First, there was talk of a new album in 2009. Then it was reduced to just a mere song in 2009. And here we sit in a brand new decade, almost a year removed from Blink's monumental reunion, and 99.999% of the world (including yours truly) still hasn't heard a single note of new Blink music, even though the members were discussing it with us as early as April last year. I gotta tell ya, I don't think they'll get a full album out in 2010, but I don't think sharing a song or two is too much to ask; do you?

1. A NEW RIVAL SCHOOLS ALBUM
It’s difficult to believe–and increasingly depressing–that it’s been almost a decade since I first heard Rival Schools’ debut full-length, United By Fate. But the post-hardcore super-group (featuring members of Quicksand, CIV and other equally super bands) are returning from six years of radio silence with an album that previously only existed in the four seconds right before I wake up–when I’m still married to Jenna Fischer (much to the dismay of Amy Adams), so rich that I consider it a chore to ride a jet ski to get to my other jet skis and, ya know, tall.

2. THE RETURN OF COMMUNITY
I can’t remember when I first heard of Community or saw a commercial for it, but I remember just not wanting any part of it. That guy from The Soup? It’s at a community college? Is that Chevy Chase in Diane Keaton glasses? Gah. But NBC tricked me into watching it by putting it on right before The Office, I gave it a shot around the Halloween episode and have been astounded to find myself laughing out loud–the way I did before Jim and Pam got married. Community blows away everything that NBC has tried out in that spot (Kath & Kim, Parks And Recreation) and if you guys don’t start watching and it gets canceled, I swear I’m gonna straight up lose it.

3. PAUL
Did you see Shaun Of The Dead? If you answered that you haven’t, my initial reaction is despair. Like a wave of, just, despair. Did you see Hot Fuzz? If you answered you haven’t, I’m slightly less physiologically affected because it wasn’t quite as good. Paul is written by and stars Simon Pegg and Nick Frost-the guys from both of those flicks–and is about two British geeks on their way across the U.S. for a comic book convention. I was sold there. But then I found out that “Paul” is actually an alien they encounter and played by Seth Rogen. Also, Jason Bateman and Kristen Wiig are in it. Then I looked for my head after it blew straight up a good 54 feet.

4. A NEW CIRCA SURVIVE ALBUM We’re going on three years without any new music from Circa Survive–not counting frontman Anthony Green’s 2008 solo album, Avalon. To reiterate for those keeping score at home: During that time, Hollywood Undead put out two full-lengths and Millionaires put out two EPs. It’s clear that we need Circa back now more than ever. Don’t we have some kind of spotlight we shine into the night sky for something like this? I feel like we do.

5. ALICE IN WONDERLAND
I’m afraid of playing cards and babies that turn into pigs, so naturally I’ve been horrified during every interpretation I’ve ever seen of Alice In Wonderland. (I’m especially looking at you, 1985 made-for-TV version starring Telly Savalas, Ringo Starr, Scott Baio and Sherman Hensley from The Jeffersons). Still, every time I hear about a new AIW ( Lewis Carroll just rolled over in his grave and said, “Really?”), I gotta see it. Throw in the fact that Tim Burton assembled an all-star team of awesome (Johnny Depp, Crispin Glover, Alan Rickman and Anne Hathaway) and, well, I’ll be there. It’s like I wanna see how playing cards find the next way to scare me.

1. THE RETURN OF GLEE After the members of McKinley High's New Directions! successfully won their Sectionals at the end of season 1, I can't wait to see what songs they mash-up for their next competition. (Rumor has it there's an all-Madonna episode in the works!)

2. A NEW MY CHEMICAL ROMANCE ALBUM
The Black Parade has had a fairly permanent place in my iTunes rotation since it came out in 2006; my iTunes is ready for new My Chem.

3. THE RUNAWAYS
I know this puts me in the vast majority, but I'm stoked for a film starring Kristen Stewart that doesn't have anything to do with vampires (not counting the kind you can sometimes find in the music industry). With her turn as Joan Jett in this biopic that also stars Dakota Fanning and Alia Shawkat, I think Stewart will endear herself to a whole new set of fans (read: non-tweens).

4. TOY STORY 3
The third installment in the series that began my love affair with Pixar, I am totally stoked to see Buzz and Woody back on the big screen. Throw in screenwriter Michael Arndt (Little Miss Sunshine), and we're pretty much guaranteed that this is going to be a quality film, not one that rests on its well-established laurels.

5. TEGAN AND SARA RETURN TO THE ROAD
Despite my not-at-all-over-the-top love affair with these Canadian sisters' beautiful music, I've only seen them live once. However, that number will double when they play the Lakewood Auditorium this March. Did I mention the Lakewood Auditorium is actually in the city's high school? Because it is, making it an intimate venue with great acoustics, a mere few blocks from my apartment.

1. A NEW MY CHEMICAL ROMANCE ALBUM
Ever since The Black Parade came out, I haven't felt the slightest need to go back to My Chemical Romance's first two albums. Judging by the tracks I heard in October while interviewing MCR for the cover of the Most Anticipated 2010 issue, Parade seems destined to that same fate in my music collection. From the house-party vibes of "Death Before Disco" to the furniture-wrecking rave-up "Black Dragon Fighting Society," this year's model of MCR will sound perfectly sweet on a playlist between Kyuss' "Hwy 74" and Primal Scream's "Rocks." And if you can't get right with that, I feel sorry for your parents.

2. WEASEL WALTER JOINING BEHOLD… THE ARCTOPUS
Weasel Walter, the one-man motor-melting fulcrum behind the free-jazz/poly-grind outfit the Flying Luttenbachers and comrade to such plasma-burning units as Prurient and xbxrx, has moved to New York City to join the ranks of tech-metal wunderkinds Behold… The Arctopus. Walter and BTA chairmen Colin Marston and Mike Lerner will be recording their next album for Blackmarket/Metal Blade this year. Given the reputation of Walter and the majesty of the Arctopus' output, to slightly paraphrase Jack Nicholson from the film A Few Good Men, your speakers can't handle BTA's truth. Represent, calculus-rock fans!

3. A NEW JAGUAR LOVE ALBUM
Despite loving their Matador Records debut, Take Me To The Sea, I still have yet to see Messrs. Johnny Whitney and Cody Votolato–aka Jaguar Love–do their twisted pop thing live. Since the release of Sea in 2008, they've parted ways with original member J. Clark; stripped down their live band to themselves and a drum machine; and left Matador for the Fat Possum roster. "Up All Night," a track they had available for download this fall, should make them darlings in the eyes of people who have bookmarked LastNightsParty.com and have a complete assortment of Vice magazine swag. Guys, I love ya, but I'd be lying if I told you I wasn't worried… (Photo: Chris Lang)

4. A NEW DILLINGER ESCAPE PLAN ALBUM
New drummer (Billy Rymer), new label (Party Smasher Inc., their own imprint through Season Of Mist), new ways of doing things; same vicious aural killing instinct. 2010 finds tech-metal deities the Dillinger Escape Plan ratcheting things up to full-on metacarpal anguish on the soon-to-be-released Option Paralysis. Hopefully it will cause legions of uninspired dullards with instruments to exhale deeply and say, "Fugg it, I'm done. I think my dad can get me in at my uncle's landscaping company."

5. JOOST SWARTE'S MODERN SWARTE
Artist Joost Swarte is considered a national treasure of the Netherlands; if you ever saw any of his "clear line" rendered comics, you might consider emigrating there. Swarte has been credited for rejuvenating the alternative underground comics movement in Europe since the early '70s; his work has appeared in publications ranging from the classic RAW magazine to The New Yorker. (He's also done architectural design, as well.) An extensive collection of his work, titled Modern Swarte, has been on Fantagraphics Books since spring of 2007. Hopefully, it will finally see the light of day this year. Check out Swarte's work and where I spent a chunk of change last year. alt

Get skins for your iPod, xBox, and cell phones from these artists and more at the official AP/DiNG Life site now!!

Which ‘Friends’ character are you based on your music taste?