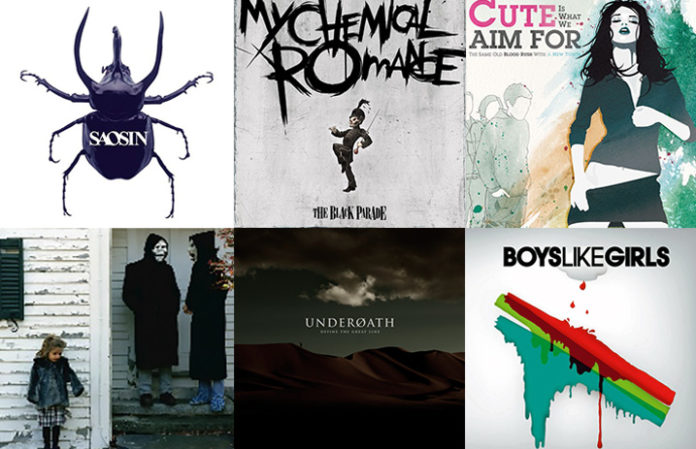 Life was different 10 years ago: Hot Topic was your go-to hangout spot, physical CDs were still cool and updating your MySpace profile was the only thing that truly mattered. Musically, it was a different universe. The year introduced various artists and albums who created a lot of the sounds that are popular now. In reverence, here is a look back at 20 albums that helped soundtrack a wondrous time of youthfulness and self-discovery.

As their seventh official LP, AFI’s Decemberunderground blew the world away by coming in at No. 1 on the Billboard 200. With its breakout single “Miss Murder” and other great hits, AFI helped pioneer the blending of alternative punk/rock with themes of post-hardcore that eventually redefined the genre. —Atreyue Ryken

Before the label’s dive into pop, Alexisonfire’s Crisis stands as one of Vagrant Records’ most influential post-hardcore/melodic-hardcore albums. Debuting in their home country of Canada at No. 1, Crisis went on to influence monumental albums such as Silverstein's Arrivals & Departures (2007) and Cancer Bats' Hail Destroyer (2008). —Atreyue Ryken

Boys Like Girls came out swinging in ’06 with their massive self-titled debut, which subsequently put them on everyone’s radars. From escapism anthems  (“The Great Escape,” “Five Minutes To Midnight”) to summer ballads (“Thunder,” “Hero/Heroine”) Boys Like Girls had it all—and then some. —Tyler Sharp

Brand New – The Devil And God Are Raging Inside Me

I’m not sure there are words in existence that would serve this album justice. What can you say? There has never been a record of the same stature and magnitude of The Devil And God, and there never will be. Brand New provided the world with 12 unparalleled tracks that tell a different tale to every listener—it doesn’t get any better than that. —Tyler Sharp

Cobra Starship – While The City Sleeps, We Rule The Streets

While The City Sleeps is what we really mourn when we say “R.I.P. Cobra.” The first album from Gabe Saporta’s brainchild featured a host of Fueled By Ramen favorites, including William Beckett and Travie McCoy on the iconic “Bring It (Snakes On A Plane).” Although Cobra’s witty, abrasive lyricism and classically long song titles (i.e. “Send My Love To The Dance Floor, I’ll See You In Hell (Hey Mr. DJ)”) were a natural fit for the power-pop landscape of 2006, the group brought something fresh with dark, synth-heavy electro-pop that was borderline revolutionary in 2006 and arguably ushered in the scene’s now-prominent EDM influence. —Kika Chatterjee

In their prime—somehow, almost a decade ago—Cute Is What We Aim For effortlessly churned out hits like “The Curse Of Curves,” “Teasing To Please” and “There’s A Class For This” that became instant classics of the mid-2000s neon-pop genre explosion. Any single from Blood Rush still kills at parties, as long as you have the right people. After all, no one can resist screaming along to “What you got now/Gotta gotta give it up.” It’s that anthemic appeal that drove sizable crowds to see the band on Warped Tour almost eight years after the album’s release. —Kika Chatterjee

Dear Love: A Beautiful Discord serves as the Devil Wears Prada’s debut full-length. A monstrous offering, Dear Love breathes an unbridled sense of youthfulness into melodic metalcore. And with song titles like “Dogs Can Grow Beards All Over,” “Who Speaks Spanish, Colon Quesadilla” and “Swords, Dragons & Diet Coke,” what’s not to like? —Tyler Sharp

From First To Last – Heroine

2015 saw the return of From First To Last after a hiatus left the band dormant since 2010. This was around the time I stumbled upon their discography and was immediately drawn to Heroine, the powerful follow-up to their debut Dear Diary, My Teen Angst Has A Body Count. Heroine marked Sonny Moore’s last record with the band before the lead vocalist went on to create Skrillex, and wow, what a way to say goodbye. Maybe it’s how Moore sadistically emphasizes “shame, shame” on the track of the same name, or maybe it’s that malicious whisper in “The Crows Are Coming For Us,” but Heroine will make you silently wish 2016 is the year we celebrate screamo’s revolutionary return. —Caitlyn Ralph

Gym Class Heroes’ third record was a Fueled By Ramen super-effort, produced by Fall Out Boy’s Patrick Stump—with features from Stump and William Beckett of the Academy Is… The iconic “Cupid’s Chokehold” was initially released on the Heroes’ preceding record, but the re-release on School Children featuring Stump is the one that dominated TRL—remember TRL?—back in 2006. Travie McCoy and co. were one of the only bands to ever have such a simultaneously firm lock on the alt, pop and rap genres, proving it with features from Lil Wayne, Tyga and Keith Buckley on the deluxe edition. An eclectic mix, but what else would you expect from Gym Class Heroes? —Kika Chatterjee

Hawthorne Heights – If Only You Were Lonely

Don’t let most recent wave of emo sway you, Hawthorne Heights are the genre’s true darlings. Hot off the success of their debut LP, The Silence In Black And White, HH unleashed If Only You Were Lonely and catapulted themselves even further into the alternative world with the emo anthem, “Saying Sorry.” —Tyler Sharp

A timeless revolution of theatrics, of iconic style, of music, The Black Parade wasn’t a metaphor—it was a tangible movement. The heaviest brush stroke on My Chemical Romance’s painting. The crown that proclaimed My Chemical Romance as everlasting overlords of our scene. From the chilling chords of “Welcome To The Black Parade” to the behemoth bridge on “Famous Last Words,” from the beautiful ballad “Cancer” to the strangely stirring “Mama, ” The Black Parade and its pristine musicianship elevates a complex concept to be a universally accessible outpour of emotion. It’s no wonder my sister and her friends, only about five years old at The Black Parade’s release, revere the record—and the band for that matter—as the torch that guides their musical taste like 2006 was yesterday. —Caitlyn Ralph

Okay, we all know that New Found Glory will go down as one of the forefathers of pop punk. Their late ’90s dominance alongside Blink-182 led the genre after Green Day’s Dookie and wrote its blueprint for the 2000s (All Time Low and the Story So Far have them to thank for band names). However, their fifth album, Coming Home, is a like a cool glass of water within a collection of excitable, ingrained, catchy pop punk. Coming Home was the turning point, proving that the band were capable of much deeper moments (that intro at the beginning of “Oxygen,” though). A dose of maturity, a coming of age point and a trajectory for other bands to follow. —Caitlyn Ralph

The Red Jumpsuit Apparatus – Don’t You Fake It

For all the time that the lyrics from “Your Guardian Angel” spent in your AIM away message, Red Jumpsuit Apparatus’ Don’t You Fake It actually still holds its own as a quintessential emo record 10 years later. There’s a reason that the legendary “Face Down,” which seems way too heavy for radio now, had the mainstream success that it did back in 2006. RJA didn’t just know how to do emo and pop punk well—they wrote songs that became anthems for the masses: emotional singalongs over powerful punk instrumentals with universal appeal. —Kika Chatterjee

Rise Against – The Sufferer And The Witness

With singles like “Ready To Fall” and “Prayer Of The Refugee,” Rise Against’s The Sufferer And The Witness stands as a classic gateway for many into punk. As their first top 10 record on the Billboard 200, this album set the course for the rest of the band’s fruitful and ongoing career. —Atreyue Ryken

After Anthony Green exited Saosin, the band held open auditions for a new vocalist, a call which then 19-year-old Cove Reber heeded. After touring with the band throughout 2005, Reber hit the studio to record Saosin’s debut full-length. Saosin is heralded by many as the peak of the band’s career, with its succeeding effort not generating near as much exposure. —Tyler Sharp

For a debut album, Mutiny! was one of a kind. With its two singles and accompanying videos for the title track and “Echoes,” this record took Set Your Goals from a bay area local pop-punk band to the recently reunited legends they are today. —Atreyue Ryken

Taking Back Sunday’s Louder Now gives explicit instruction: Listen to this album as loud as you can, with headphones on—now. The major label debut from the alternative rock superstars, Louder Now not only propelled Taking Back Sunday into the mainstream, but also brought the untampered genre on the radio amid popularity from similar sounding, however not as pure, counterparts. Yeah, “MakeDamnSure” might have been the driving single, but “Liar [It Takes One To Know One]” still sounds as good as it did in 2006. —Caitlyn Ralph

Thursday – A City By The Light Divided

Alright, I admit it, I wasn’t even in high school in 2006—however, if I was, lyrics from Thursday’s A City By The Light Divided would have been scribbled all over my notebooks. The fourth album from the now defunct band followed an indefinite hiatus announced in 2004, and it became the best way to wake up from a nice, long nap. Frontman Geoff Rickly’s vocals are simply haunting, and tracks like “Sugar In The Sacrament” have a classic yet refreshing feel, cementing Thursday as a band that kids of all scene generations can easily latch onto in 2006 and 2016 alike. —Caitlyn Ralph

Underoath are arguably the most influential band in modern metalcore. In 2004, they defined the post-hardcore movement with their immaculate sophomore effort, They’re Only Chasing Safety. Two years later, they unleashed one of metalcore’s finest moments, Define The Great Line. It’s a passion-filled record that intertwines violent aggression and crippling honesty into an unforgiving machine of progressive metal. And now, 10 years later, Underoath are set to take the stage to perform Define The Great Line in its entirety—an event that you do not want to miss. —Tyler Sharp