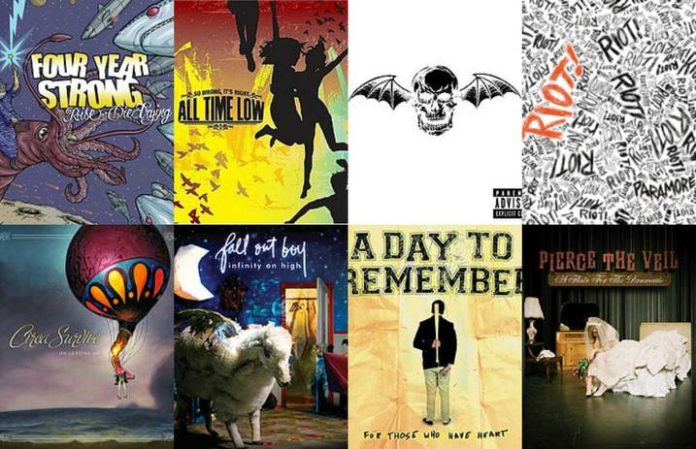 Life was different 10 years ago: Neon pop punk was on the rise, physical CDs were still cool and updating your Myspace profile was the only thing that truly mattered. Musically, it was a different universe. The year introduced various artists and albums who created a lot of the sounds that are popular now. In reverence, here is a look back at 20 albums that helped soundtrack a wondrous time of youthfulness and self-discovery.

Read more: The scene reflects on iconic artists who we lost in 2016

A Day To Remember – For Those Who Have Heart (Victory)

Fast forward to 2017, A Day To Remember are a powerhouse in the scene, whether it comes to their latest release, Bad Vibrations, or their successful Self Help Fest. However, back in 2007, the band were still discovering their voice—which is what makes For Those Who Have Heart such an interesting listen 10 years later. At some points, it’s the classic ADTR that we know and love; but at others, it’s hard to recognize McKinnon’s voice. It’s almost amazing to think this was the band’s first release under Victory Records and only their second full-length album, considering just how good the record is. If you haven’t listened to For Those Who Have Heart recently, definitely give it a relisten to appreciate where ADTR haves been—and just how good Tom Denney was on guitar. ADTR set the bar high and have continually raised it on every album that has followed. —Jordan Toney

Against Me! – New Wave (Sire Records)

When Against Me! made the jump from Fat Wreck Chords to the Warner-owned Sire Records for their fourth album, New Wave, there was pushback from fans and critics alike in the punk scene. But the change over to a major label afforded them the opportunity to work with mega-producer Butch Vig (He worked on an album called Nevermind—maybe you’ve heard of it) and an overall more polished product. In addition, this record also has become a major psychic chapter in both the history of the band and, as well as the evolution of Laura Jane Grace. Not only did New Wave bring us the “The Ocean,” Against Me’s first song that blatantly addressed gender dysphoria (“If I could have chosen, I would have been born a woman / My mother once told me she would have named me Laura”), it also contained the band’s biggest hit to date, “Thrash Unreal,” a song that is always guaranteed to get a party started. These are the moments where listeners followed both the music and their hearts. —Rabab Al-Sharif

After signing with Hopeless Records, releasing their debut EP Put Up Or Shut Up and earning a spot on 2007’s Warped Tour, All Time Low had already accomplished what most bands dream of. Yet, no one was quite sure how they’d do once they got a shot at a full-length. The result pleased the cult of existing fans, won over a significant portion of their daily, sweaty crowds and had the industry hungry for more. Ten years later, multiple songs are still in regular rotation on their sets—“Remembering Sunday” and “Six Feet Under The Stars” as well as, cough, “Dear Maria, Count Me In”—and, especially after a tour with their idols Blink-182, it’s clear All Time Low are still grateful for every opportunity they’ve gotten. As Jack Barakat says, “We’re just fanboys who got a chance”—and we’re still listening to that chance today. —Mackenzie Hall

An album best representing a mecca in melodic metalcore, Messengers would become the first production from the current lineup of August Burns Red. After establishing their footing with their debut, the group brought on vocalist Jake Luhrs and bassist Dustin Davidson and never looked back. Everything about this record is still robust a decade later—the vocals, the riffs and one of the heaviest drum mixes of all time—and Messengers delivers pure, relentless energy that also carries very positive lyrical content. It’s almost inevitable that this will hold steady as ABR’s most ruthless sound, as they have now grown into a well-oiled machine, writing much more creatively with each successive album. However, songs like “Composure,” “Back Burner” and “The Truth Of A Liar” will always remain staples in the band’s setlist, as Messengers contains some of the most crushing breakdowns the scene has ever heard. —Nikhail Gogia

If you asked the boys in A7X how they wrote a follow-up to the masterpiece that was City Of Evil, they’d tell you it was “Almost Easy.” What they wouldn’t have thought was that it would be the last complete record that drummer Jimmy “The Rev” Sullivan would both write and perform on. Nonetheless, Avenged Sevenfold’s self-titled album came at a pivotal point in the group’s career, with many of the songs becoming hits within their catalogue. Tunes such as “A Little Piece Of Heaven” and “Dear God” challenged A7X’s typical style, while songs like “Critical Acclaim” and “Scream” only exerted their influence on heavy metal of the ’00s, with that second pair still finding their way into stadiums around the country. —Nikhail Gogia

Cartel’s self-titled album is a gem from mid-2000s MTV, a time when the channel regularly pulled bands from the scene into the mainstream spotlight. Case in point: Once Cartel signed to major label Epic, they were chosen for MTV’s Band In A Bubble mini-series, which saw the band put in a glass bubble for 20 days to write and record a new LP. The result of that odd experiment was a feel-good scene classic, driven by the charming lead single “Lose It” and supported by the easy-going sing-along “Wasted.” —Caitlyn Ralph

With a title lifted from writer Charles Bukowski and an aesthetic best described as post-hardcore on Broadway, Chiodos’ second album rose above the glut of scene dudes hungry for last.FM plays and prime stage times at Warped to create a record that confounded their colleagues, enraptured their fans and raised the possibilities for the scene—while still being able to lose shoes in moshpits. Frontman Craig Owens delivered the pomp and the (unfortunate) circumstances that resonated in songs like “Is It Progression If A Cannibal Uses A Fork?” and “A Letter To Janelle,” while keyboardist Bradley Bell deftly arranged the band’s vision of sonic filigree and maximum crunch. Put “Bulls Make Money, Bears Make Money, Pigs Get Slaughtered” up against whatever plug-in fest the new hotness are currently leaning on and you’ll understand why this album is so enduring. —Jason Pettigrew

Anthony Green’s transfer to Circa Survive demonstrated a creative leap personally, and On Letting Go has grown to become some of the band’s best material. As their sophomore release, Circa Survive presented this fine-tuned and polished product that blended tasteful vocals over a wide range of alternative music styles. Tracks such as “Kicking Your Crosses Down” and “The Difference Between Medicine And Poison Is In The Dose” became examples of how the band would grow over the upcoming decade. On Letting Go displays some of the best natural talent and influence from each of the group’s members, making it arguably Circa Survive’s most complete release. The band have honored the record with a 10-year anniversary tour, and watching this piece of art performed live will likely feel magical. The raw emotion that On Letting Go delivers is something that will continue to be appreciated for years to come. —Nikhail Gogia

A bedazzled product of the Decaydance heyday, Cobra Starship’s Patrick Stump-produced sophomore record ¡Viva La Cobra! was, as AP’s review called it, “a party at the end of the world.” Every time Gabe Saporta’s crisp vocals touch the electrifying instrumentation in tracks like “The City Is At War” and “Guilty Pleasure,” glittering power-pop pumps through partygoers’ veins. Full of Friday night bangers splattered with neon nail polish, ¡Viva La Cobra! thrived off the pop in our scene—an album that sounds just as good at the club today as it did in 2007. —Caitlyn Ralph

Ire Works holds a special place in the New Jersey math-metal, post-everything juggernaut’s career for a number of reasons, all of them pretty planet-bombing. Guitarist/founder Ben Weinman played all of the guitars on the album after guitarist Brian Benoit developed significant nerve damage in his hands. But as Weinman was working on his own version of satanic tendonitis, he was immersing himself in more electronic elements, from noise-soaked harmonics to complex programming (“Sick On Sunday,” “When Acting As A Wave”), further decimating any kind of clubhouse elitism between electronic music and the decapitating tech metal the band routinely delivered. And of course, frontman Greg Puciato further cemented his reputation as the sexiest/scariest ball of plasma to walk on a stage (“Nong Eye Gong”). Audiences should’ve sensed Ire Works’ fury coming a year prior, when the band issued Plagiarism, a digital EP of covers of Aphex Twin, Nine Inch Nails and Massive Attack (okay, and Justin Timberlake). The Dillinger Escape Plan will live forever in the hearts of anyone who will never ever feel the need to go away quietly. —Jason Pettigrew