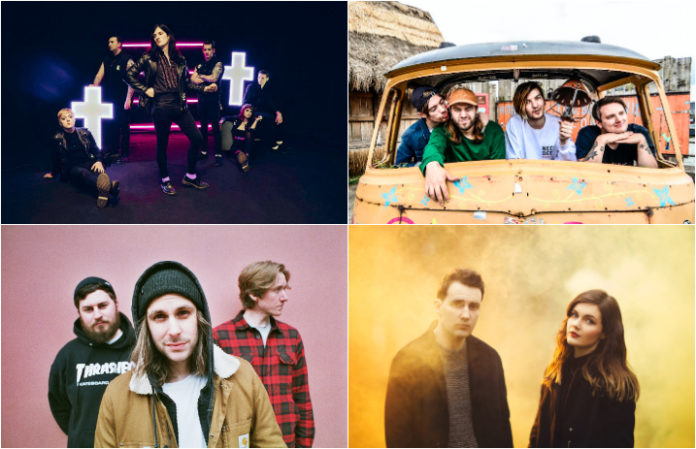 Asking Alexandria, Neck Deep, the 1975—the U.K. has produced some of the best and most beloved alternative bands of recent times. The British scene is thriving right now; from indie to metal, via pop punk, emo, grunge, hardcore and more, there’s a whole wave of fresh, exciting U.K. bands to be hyped about. Here are 20 of the most awesome new acts from across the pond that you need to check out:

Headquarters: Reading, Berkshire
Check out: “In My Mind,” “Nightdriving,” “Junk Food Forever”
Combining Foo Fighters-style riffing, You Me At Six-esque Brit-rock and a lashing of indie sensibility, the Amazons are one of U.K. indie rock’s brightest hopes. The four-piece have developed a blistering live reputation in recent years, something that helped the band get booked for a shedload of festivals this summer. Plus, they’ve all got great hair: just look at frontman Matt Thompson throwing those luscious locks around in the “In My Mind” video. Majestic.

Headquarters: Croydon, London
Check out: “Ripped Jeans,” “Pepper Tea,” “Let’s All Be Friends”
Ever wondered what Brand New would sound like if they went “indie”? London upstarts Bellevue Days are just that. Their last EP was called Sad Boy, which probably tells you everything you need to know about this band’s sound. Part emo, part indie rock, part grunge —the band refer to their sound as “sludge-pop”—Bellevue Days look set for a big 2017, with a new record rumored to be on the horizon.

Headquarters: Exeter, Devon
Check out: “I’m Not Well,” “Husk,” “Whatever Lets You Cope”
Another band whose sound has nods to Jesse Lacey and co. are the much-hyped emo-rock trio Black Foxxes. Debut LP I’m Not Well arrived last year to critical acclaim, and in vocalist Mark Holley Black Foxxes possess one of the finest talents to emerge from the U.K. underground in years. If you like your music with a heavy dose of catharsis, this is a band worth checking out.

Headquarters: Brighton, East Sussex
Check out: “Hello Today,” “Corrine,” “Madonna”
Like the idea of Lana Del Rey or Lorde fronting a rock band? Then you’ll love Black Honey. All indie chic and sultry swagger, the South Coast band—fronted by the effervescent Izzy B. Phillips—are a seriously cool proposition. They’re a musical melting pot of influences, too: indie, pop, Americana and alt-rock all come together with some retro ’90s stylings to create a sound that’s both familiar and fresh.

Headquarters: Brighton, East Sussex
Check out: “Saviour,” “Glass Built Castles,” “Statues Of Shame”
Yes, they’re another band with “black” in their name, and yes, they’re another band from Brighton, but that’s where the resemblance between prog-metallers Black Peaks and those who’ve come before them in this list ends. This is heavy stuff, yet it’s underpinned by the kind of groove you find with the likes of Deftones, Mastodon and the Dillinger Escape Plan. Those may sound like bold comparisons, but Black Peaks are an intrepid, imaginative proposition, and they could well end up being the heavy band of the U.K. in years to come.

Headquarters: Harrogate, North Yorkshire
Check out: “Reason To Stay,” “Closure,” “Failure”
Fun fact: Both Fil Thorpe-Evans and Sam Bowden of pop-punk heavyweights Neck Deep used to be a part of previous incarnations of this melodic hardcore trio. Formed from the ashes of the band Climates, Blood Youth have been steadily building a reputation as one of the U.K. metalcore scene’s shining lights. Their debut full-length, Beyond Repair, is due to drop imminently, and if you like your heavy music with a healthy dose of melody, these boys are definitely worth a listen.

Headquarters: Aberdeen, Scotland
Check out: “Death Chasers,” “Spit Blood,” “Maria – Piano Version”
Scotland’s Cold Years are a band who very much wear their heart on their sleeve; this is what Bruce Springsteen would’ve sounded like if he’d grown up in Caledonia. The music of Cold Years is heady, heartfelt and hopeful; rock rarely sounds as honest as it does on the band’s Death Chasers EP. It’s also worth mentioning that in the gruff tones of frontman Ross Gordon, Cold Years possess a vocalist that can stand up to the best in the business.

Headquarters: Southampton, Hampshire
Check out: “Black Rain,” “Hiding With Boys,” “Misery”
Combining elements of goth, punk, glam and emo, Creeper are truly an extraordinary proposition. They also display the kind of feverish imagination and wildly ambitious love of concept records that the alternative scene hasn’t had since a little band called My Chemical Romance were ruling the music world. Creeper are incredible, and they’re going to be massive—it’s time to join the cult.

Headquarters: Woking, Surrey
Check out: “I Spend My Days (Wishing Them Away),” “Greyer Than You Remember,” “Watching Films To Forget I Exist”
Riffs. Lots of fucking riffs. Hardcore heroes Employed To Serve are shining a light on the heavy end of the U.K.’s burgeoning underground scene, and they’re giving no fucks along the way. Latest single “I Spend My Days (Wishing Them Away)” is a furious sledgehammer of a track that explodes from the speakers and doesn’t relent until you’ve been beaten into submission. Shout-out to vocalist Justine Jones, whose work with Holy Roar Records helps to promote some of the finest bands out there.

Headquarters: Killarney, County Kerry
Check out: “Circle,” “Safe Haven,” “Car Spin”
Disclaimer: Pop-rock duo Greywind hail from the Republic Of Ireland, not the U.K., but the sheer level of hype they’re creating across the pond right now meant we just had to include them. If PVRIS are your jam, then the electro-tinged ditties that Steph and Paul O’Sullivan (yep, they’re brother and sister) create are something you can’t ignore. Their debut LP, Afterthoughts, dropped at the start of the year, and it’s a record that’s already marked them down as future stars.

Here’s when you can hear Crown The Empire play their acoustic...