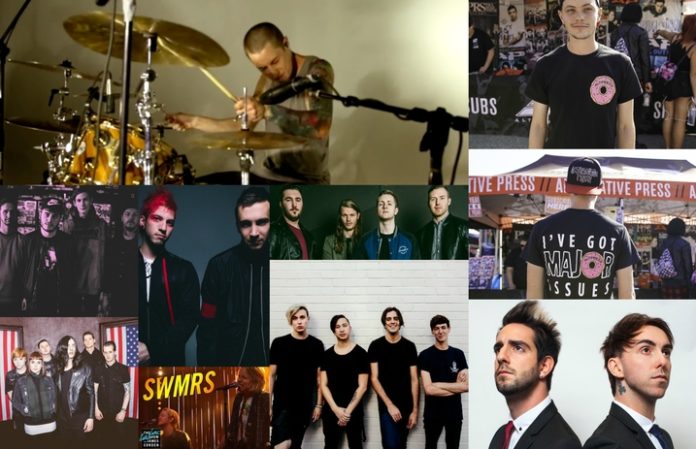 A lot happens online in our scene each week. In an attempt to capture what you might've missed, we gather up noteworthy internet moments and package them in one convenient post every weekend. Check out this week's roundup below!

1. “Here is my playthrough for I See Stars' 'White Lies,' off of their new album Treehouse. I did drums for Treehouse back in December, and this is my personal favorite off of it,” Luke Holland of the Word Alive says to AP. Check out the video here:

2. You can now get a Twenty One Pilots-themed ukulele in their webstore, which was previously only available on the Emotional Roadshow tour. Check it out here.

3. Moose Blood have premiered a new song from their forthcoming album Blush, which is due out August 5 via Hopeless Records. Listen to “Sulk”:

4. Not only are SWMRS the first unsigned band to perform on The Late, Late Show —but this performance was also their TV debut. Check of their performance of “Figuring It Out” from Monday:

5. This couple got engaged at Creeper’s first show in America. So cool!

Last night at our first US show in Chicago @lucifersshroud proposed to @techmasterfunk ..

6. With Confidence have dropped a video for their awesome single, “Voldemort.” Check it:

7. We finally have a due date for I Prevail’s debut album! Lifelines will release on October 21 via Fearless Records. Here are some previously announced details on the album.

I'VE GOT MAJR ISSUES T-shirts are $20 at the @AltPress tent summer at the @VansWarpedTour. @WheresBryce pic.twitter.com/qsW6uvcEs6

… and quickly sold out.

MY DONUT SHIRTS ARE SOLD OUT ��

9. This Wild Life cover the Ghostbusters theme song on their Facebook: