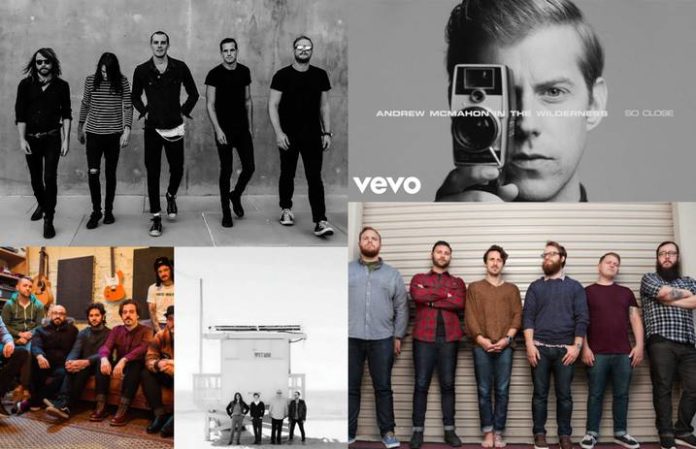 1. The Maine announced this week that album six is complete.

Read what frontman John O’Callaghan had to say about the forthcoming album in AP’s Most Anticipated interview here.

It's official! Album 6 is complete. 10 years in and we are more excited than ever with what we have created. Can't wait to share the new sounds with you. Thank you for being a part of the family and thanks to @colbywedge and @timkirch for making album 6 possible. Here's to the start of something new! #8123 ��: @_lupe

2. Andrew McMahon In The Wilderness released a new song called “So Close.”

“So Close” comes from In The Wilderness’ new album Zombies On Broadway, out Feb. 10.

“So Close” is here! Watch the lyric video https://t.co/mnOH4DVIye or download/stream the song https://t.co/6170jRoQPZ pic.twitter.com/EMGLL26CpC

3. Frank Carter, formerly of Gallows, and his band the Rattlesnakes premiered a new music video for “Wild Flowers.”

The band will be hitting the States for a handful of dates later this year. Check them out below the video.

Frank Carter & The Rattlesnakes’ album, Modern Ruin, is due out Jan. 20.

4. Good Tiger—one of AP’s 17 Artists You Need To Know In 2017—announced on Instagram that they've entered the studio to record their second LP.

Today, January 4th, we enter Middle Farm Studios to record our second album. We are joined by two extremely talented producers (@forrestersavell & @nollyperiphery). We look forward to what the next month holds. See you all soon. �� @giloscope #goodtiger #GTalbum2

5. The Wonder Years teased fans this week with what seems to be a studio Instagram post with the caption “Back at it.”

6. As part of that adorable A Red Trolley Show—which sees band members perform on a trolley to some lucky commuters—Anthony Green did an acoustic rendition of “Will It Be” as homage to his kids.

The band’s new album, For Posterity, will be out Jan. 13 via Hopeless Records.

It’s featured on the band's The White Album deluxe reissue.

9. Mayday Parade’s Jake Bundrick made fans even more excited for new music with some tweets this week.

I've honestly enjoyed my social media hiatus recently. Sometimes you just gotta get away and focus on yourself…aka music.

Very proud of what the 5 of us have been creating on our own so far. I'm blessed to be around such talented people in Alex, Brooks, Cab & D.

Just know we're listening and want to make our next record the best we can for not only us, but for you guys. Until then, keep your head up.

Here’s their new single, “The Miles We Are Apart”:

Velocity/Rise will be releasing the band’s new album later this year.