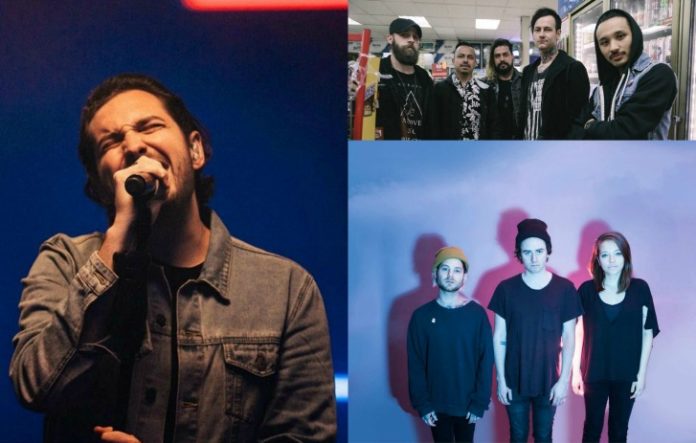 1. After saying goodbye to 2016 with a HUGE two-year anniversary party (that was streamed live by literally 100,000 people on Twitch), Emo Nite is kicking off 2017 with their first wave of announcements.

2. The Flats—fronted by Chris Kerekes and produces by his brother, Mat from Citizen—released a surprise EP called Auburn In The Everlast for free on BandCamp.

3. You Me At Six did a special live session of “Swear” for Vevo Presents.

4. Suicide Silence has released Part 1 of a 360-degree interview. In this unique interview, they talk about their new album and what's different compared to some of their previous records.

Suicide Silence will be releasing future episodes of this interview over time until  Suicide Silence is released on Feb. 24. Check out their tour dates supporting the record below.

The band is currently in the studio with producer/engineer Chris Rakestraw, credited for Danzig, Megadeth, Deftones.

6. From the Get Up Kids, Matt Pryor premiered a new song from his forthcoming album Memento Mori.

Listen to “I Won’t Be Afraid” below and grab the new album on Feb. 17 via Equal Vision Records/Rory Records.

Pryor and Dan Andriano of Alkaline Trio are teaming up for an extensive full US tour this year. Check out the dates below the stream.

“‘Dearly Departed’ is really about loss and the feeling of disconnection. It could be a part of you that you somehow lost along the way, or a person in your life that was gone too soon. We really wanted to portray a sense of despair, and the feeling of knowing that no matter what you do, some things you cannot change,” the bands says about the single. “We wanted this song to be a safe place for listeners, and to know that they're not alone when dealing with this sort of thing. Hence the kid in the music video. He finds the band and suddenly everything starts to look up. All it takes is a point in the right direction.”

8. Slayer are releasing a comic book on Jan. 25 through Dark Horse Comics.

Check out a preview of four pages below.

Listen to her cover of “Gone Daddy Gone/I Just Want To Make Love To You” below.

10. Homebound released a lyric video for their song “Sonder,” taken from the band’s forthcoming EP, The Mould You Build Yourself Around.

The EP is set to be released on Feb. 10 through Rude Records. You can pre-order it here.

“We as individuals get so caught up in our own lives, we often forget that there are others sharing the same experiences,” the band told New Noise Magazine. “I think ‘Sonder’ will come as a surprise to some people and maybe prove we’re not just a one trick pony.”