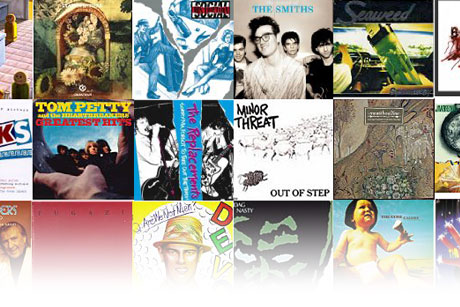 In our 24th anniversary special in AP 252, 24 artists including PATRICK STUMP of FALL OUT BOY, JADE PUGET of AFI, MARK HOPPUS of BLINK-182 and, well, 21 more told us about the bands who changed their lives. We asked each of the contributors to suggest one quintessential track from their icons, culminating in one eclectic, awesome playlist.

1. ALL — “Long Distance”
Recommended by Mike Kennerty of the All-American Rejects
“This was stuff I could never teach my brain to sing and play at the same time.”

2. The Beatles — “Come Together”
Recommended by John Gourley of Portugal. The Man
“It was an immediate connection for me.”

3. Black Flag — “Depression”
Recommended by Andy Williams of Every Time I Die
“Black Flag became more than a band to me; they were a movement.”

4. Blink-182 — “Dumpweed”
Recommended by Alex Gaskarth of All Time Low
“The day Blink-182 announced their hiatus, I felt as if a part of me died.”

5. Braid — “I’m Afraid Of Everything”
Recommended by Anthony Green of Circa Survive
“Looking back on it, you can actually hear them grow up in their songs.”

6. Jon Brion — “Theme from Eternal Sunshine Of The Spotless Mind”
Recommended by Greta Salpeter of the Hush Sound
“If everyone watching in the audience is human, then what is Brion?”

7. The Cure — “Just Like Heaven”
Recommended by Mark Hoppus of Blink-182
“Their music became the soundtrack to my life.”

8. The Cure — “Lullaby”
Recommended by William Beckett of the Academy Is…
“The Cure are one of the few bands I hear in my dreams.”

9. Dag Nasty — “Values Here”
Recommended by Eddie Reyes of Taking Back Sunday
“For the past 10 years and even today, I’ve been trying to emulate [Dag Nasty guitarist] Brian Baker’s sound.”

10. DEVO — “Uncontrollable Urge”
Recommended by Josh Freese of DEVO (formerly of Nine Inch Nails, A Perfect Circle and the Vandals)
“DEVO were the one band who always rang true to me.”

11. Fugazi — “Promises”
Recommended by Tim McIlrath of Rise Against
“When it comes to music, me and the ubiquitous ‘desert island’ question, everything begins and ends with Fugazi.”

12. The Funk Brothers — “Signed, Sealed, Delivered”
Recommended by Patrick Stump of Fall Out Boy
“What band’s lives haven’t been changed by the Funk Brothers?”

13. Ink & Dagger — “Shadowtalker”
Recommended by Bert McCracken of the Used
“Without Ink & Dagger, many people’s favorite songs from their favorite bands would simply not exist.”

14. Jawbreaker — “Boxcar”
Recommended by Jade Puget of AFI
“[Frontman] Blake Schwarzenbach is one of the great lyricists of the past 20 years.”

15. mewithoutYou — “Bullet To Binary”
Recommended by Hayley Williams of Paramore
“I credit their album [A–>B] Life for encouraging me, in my early teens, to think more deeply about the faith that I’ve chosen.”

17. The Replacements — “Customer”
Recommended by Fat Mike of NOFX
“The one time I saw them, I was completely embarrassed for them and in total awe at the same time.”

18. Tom Petty And The Heartbreakers — “Mary Jane’s Last Dance”
Recommended by Andrew McMahon of Jack’s Mannequin
“There was–and still is–something for everyone to love in what the Heartbreakers do.”

19. Seaweed — “Magic Mountainman”
Recommended by Vinnie Caruana of I Am The Avalanche

“[Spanaway] is an absolute masterpiece.”

20. The Smiths (Morrissey) — “There Is A Light That Never Goes Out”
Recommended by Stephen Christian of Anberlin
“Morrissey is bigger than music itself.”

24. Mousetrap
Recommended by Tim Kasher of Cursive
“Mousetrap were one of our earliest hometown heroes.”
*For the especially astute, you’ll notice we couldn’t find a Mousetrap song for the playlist.

There’s tons more on the impact these bands had on our recommending artists’ lives in AP 252, on stands now.