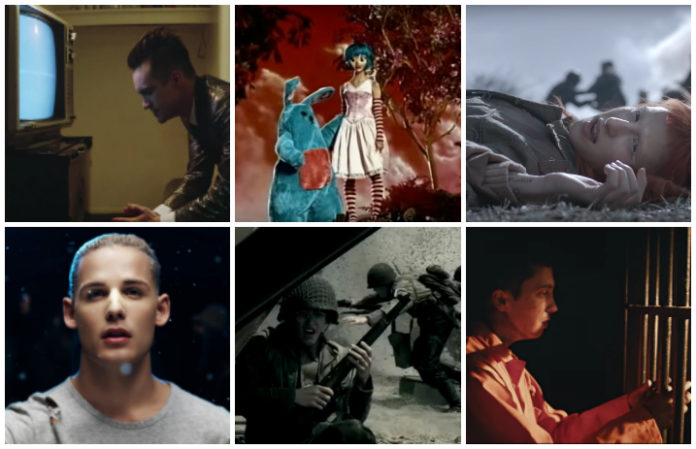 Sometimes artists get cinematic with their music videos, whether they’re inspired by a movie or they just look like they should be one. Head below for a few clips that look like films.

Despite giving off major The Shining vibes, the band check into an empty hotel and things get progressively spookier.


All Time Low’s first taste of their forthcoming album Last Young Renegade came in the form of a laundromat daydream and a lovers’ city adventure seamlessly connected by frontman Alex Gaskarth driving from point A to point B in a movie-level setup.

Memphis May Fire – “This Light I Hold” featuring Jacoby Shaddix

Papa Roach’s Jacoby Shaddix gets kidnapped and Matty Mullins is on trial, which is just the start of this dramatic Memphis May Fire video featuring cameos from some of your favorite musicians.

Melanie Martinez is super committed to her art, as shown in the series of music videos for nearly every track off of her latest full-length, Cry Baby. This double feature of “Soap” and “Training Wheels” spotlights a tumultuous relationship in her famous pastel-tinged aesthetic.

Fall Out Boy – “A Little Less Sixteen Candles, A Little More Touch Me”

This From Under The Cork Tree-era video gave us the iconic visuals of members of Fall Out Boy, the Academy Is…, Panic! At The Disco and Gym Class Heroes getting a little vampy in a The Lost Boys-like setup.

Taken from the Suicide Squad soundtrack, this track’s video features an incarcerated Tyler Joseph and Josh Dun breaking out of their cells to perform for fellow prisoners—as one does—intermixed with clips from the film.

This spooky black and white video is full of intrigue as Motionless In White follow the orders of a mysterious hooded figure.

Co-directed by Halsey herself, “Now Or Never” takes us out of Badlands and into the forthcoming hopeless fountain kingdom with a cinema-level production.

MGK pays homage to Snatch with this boxing-centric video where he stars as “One Punch Kells.”

The Academy Is… – “The Phrase That Pays”

This classic the Academy Is… video features the band committed to an asylum with actress Brittany Snow (best known for the Pitch Perfect series) portraying an eerily perky nurse.

My Chemical Romance – “The Ghost Of You”

Never ones to shy away from big production videos, MCR offered an emotional Saving Private Ryan-esque take on “The Ghost Of You.”

This video is so cinematic that people actually thought frontman Devin Oliver was going to be in the new season of Game Of Thrones as teaser images surfaced before the video’s release.

New Years Day – “I’m About To Break You”

Imprisoned and under surveillance, New Years Day offer their own take on Mad Max with this post-apocalyptic imagery.

Set in the mid ’90s, this Real Friends video spotlights the ups and downs of celebrating Halloween, from trick-or-treating to parties.

AFI’s video for “Girl’s Not Grey” has a young girl following a rabbit through an alternate reality much like Alice In Wonderland.

Inspired by a Banksy piece in which a man is throwing a bouquet of flowers instead of a bomb, this Paramore video spotlights the importance of love in the midst of colorful explosions.